Hurts looks to improve Eagles to 8-0 against hometown Texans 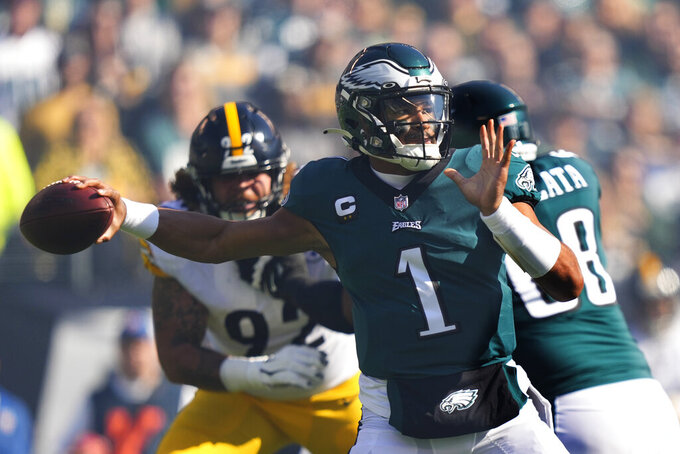 HOUSTON (AP) — Jalen Hurts was born in Houston and grew up about 25 miles from NRG Stadium.

As a child he dreamed of playing at the stadium the Houston Texans call home. On Thursday night he’ll finally get that chance when he leads the undefeated Philadelphia Eagles (7-0) against the lowly one-win Texans (1-5-1).

“I never had the opportunity to go play in Reliant as a kid, now known as NRG,” he said. “I spent a lot of time in the Houston Texans facility, my godfather being on staff as a child, and I have a lot of memories at that place, so it’ll be exciting.”

Houston coach Lovie Smith knows Hurts will be amped up to play so close to home, but he isn’t going to roll out the welcome wagon to meet the young star.

“Guys are really excited about it, to have a chance to come back, hometown, close to home,” he said. “That is always special. Every player that you talk to would say that. We’re not into homecoming, so we don’t want him to have a great homecoming coming back.”

Hurts and the Eagles look to improve to 8-0 for the first time in franchise history. The 24-year-old Hurts has been great for Philadelphia, winning 10 consecutive regular-season games, the longest active streak in the NFL.

He threw a career-high four touchdown passes last week to lead the Eagles to a 35-13 win over Pittsburgh and his 300.3 yards of offense a game leads all NFC quarterbacks.

Smith said it’s difficult to contain Hurts and that he presents a unique challenge because of his scrambling ability.

“It’s hard,” Smith said. “He’s maybe the most improved ballplayer in the league this year. What he can do, there’s a lot of good quarterbacks that can throw it, but he brings so many more things to the table. I think for us, it’s better keeping him in the pocket.”

Hurts has taken a big jump this season and has 10 touchdowns with just two interceptions a year after finishing with 16 TDs and nine picks. It’s an improvement that Philadelphia offensive coordinator Shane Steichen expected to see this year.

“I had no doubt about it,” he said. “The way he has been playing, the way he goes about his process and his business, it’s tremendous. The guys feed off it. You see it on the practice field, you see it in the meeting rooms, and to carry it over every Sunday and being consistent, that’s what you want in a quarterback, and he’s doing that now.”

The Eagles are not only undefeated on the season, they’re also a perfect 5-0 against the Texans. Philadelphia and Minnesota are the only teams Houston has never beaten.

The Eagles have been pretty quiet about a potential quest to go undefeated. The 1972 Miami Dolphins remain the only team that finished unbeaten with a 17-0 mark that could stand another 50 years or more given the parity and length of the modern NFL season. The 2007 New England Patriots came close, going 18-0 before a Super Bowl loss.

Even as the wins pile up, and the Eagles approach the midway point unbeaten, they’ve offered no bulletin board material on what it might mean to match the Dolphins.

The Texans have ranked near the bottom of the NFL in run defense all year and their performance last week was their worst of the season. Houston allowed 314 yards rushing behind a 219-yard performance by Derrick Henry in the loss to Tennessee.

It was the second-most yards rushing the team has allowed in franchise history and has Houston averaging an NFL-worst 186 yards rushing allowed a game — 30 yards more than the 31st-ranked Bears.

The Texans started a franchise-record eight rookies against the Titans. It passed the previous high of six rookies which was done three times in Houston’s first season in 2002.

The Texans started three rookies on offense and five on defense last week.

Three-time Pro Bowl defensive end Robert Quinn played 20 defensive snaps and had one quarterback hit in his Eagles’ debut against Pittsburgh only days after he was acquired from Chicago. The 32-year-old Quinn is off to a slow start with just one sack a season after he broke Hall of Famer Richard Dent’s Bears’ record with 18 1/2 sacks. There could be a “Quinn quirk” this season — because the Bears and Eagles already had their bye weeks, he could play 18 games this season. The Eagles expect Quinn to eventually show flashes of his old self in their current scheme.

“He’s an extremely intelligent player and he’s played a lot of ball. It’s just putting it into the verbiage of that,” Eagles defensive coordinator Jonathan Gannon said. “He really walked right into that room and fit right in, and it helps everybody in that room.”

There was much speculation that veteran Houston receiver Brandin Cooks could be traded before Tuesday’s deadline, but he ended up staying put. Smith got annoyed with repeated questions about the possibility of a trade on Tuesday and reiterated that Cooks was part of the team and that he planned for him to be involved in the game plan against the Eagles.

“Do we like Brandin? Yes, that’s obvious,” Smith said. “Any more than that, Brandin is a part of our football team. So, what else is there to say about it?”