Injuries keep piling up along with victories for Packers 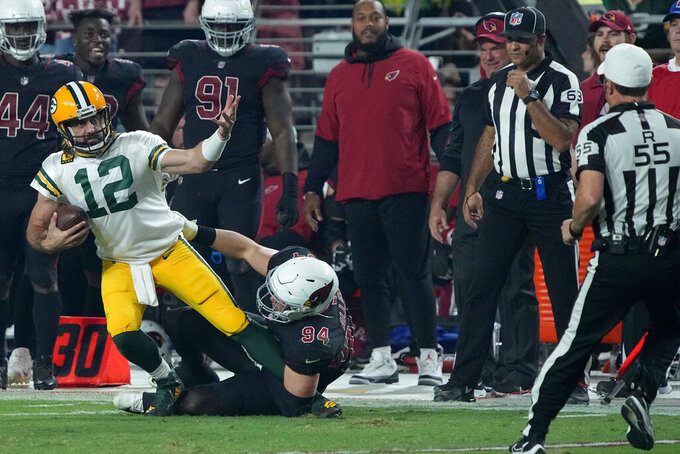 One day after the Green Bay Packers withstood numerous absences to beat the NFL’s lone remaining unbeaten team came the sobering realization they’ve lost two more players for the rest of the season.

“I feel awful for both those guys,” Packers coach Matt LaFleur said Friday. “They put a lot into this thing. They’re tough guys to replace.”

Perhaps these injuries will require Green Bay to once again to look elsewhere for reinforcements. That strategy has proved extraordinarily beneficial for the Packers (7-1) during their seven-game winning streak.

Quarterback Aaron Rodgers has noted on multiple occasions how the Packers have gotten big contributions from players who weren’t on this roster until recently. Thursday’s victory provided the greatest example of that as the Packers won without having receivers Davante Adams, Allen Lazard and Marquez Valdes-Scantling, offensive linemen David Bakhtiari and Josh Myers, cornerbacks Jaire Alexander and Kevin King and outside linebacker Za’Darius Smith among others.

The play of the game came with 12 seconds left when Rasul Douglas intercepted Kyler Murray's pass in the end zone on second-and-goal from the 5 when receiver A.J. Green failed to turn for ball. The Packers signed Douglas from Arizona’s practice squad Oct. 6.

“It just shows how good the team is and that guys step up when your number is being called,” Douglas said.

One of Green Bay’s two sacks came from De’Vondre Campbell, who signed with the Packers in June. Randall Cobb, acquired from Houston at the start of training camp, had two touchdown catches. Whitney Mercilus, who just joined the Packers last week after Houston released him, played nearly half the defensive snaps.

“We have a good group of guys,” Rodgers said. “There’s a different feeling to the team than even the last couple years. I’m not sure how it’s going to finish up, but I like the energy that we have in the locker room.”

Now they’re hoping they can get some of those injured guys back on the field, particularly since they have some extra time before their Nov. 7 game at Kansas City.

Smith provided some hope in that regard Friday when he tweeted that he “can’t wait to get back on the field with my bros,” a potential indication his back injury might not knock him out for the rest of the season. Bakhtiari has been practicing as he gets ready to make his 2021 debut after tearing his left anterior cruciate ligament on Dec. 31.

LaFleur couldn’t offer any clarity Friday on when Bakhtiari or Smith might return. The extra days before the Chiefs game also offers more time for Adams and Lazard, who both went on the reserve/COVID-19 list this week.

“We’ve found different ways to win, which is always good,” LaFleur said. “But certainly, we’re looking forward to getting some of these guys back.”

The Packers’ defense held the Cardinals to 21 points, over 11 points below their average heading into the game, despite playing without defensive coordinator Joe Barry due to a positive COVID-19 test. … After combining for just nine carries Sunday against Washington, A.J. Dillon and Aaron Jones teamed up to rush for 137 yards on 31 carries Thursday. … P Corey Bojorquez averaged 46.7 yards per attempt. One of his puts was mishandled by Rondale Moore, and Ty Summers recovered the fumble at Arizona’s 3-yard line to set up a field goal. … The red-zone defense that struggled so much early in the season came through for a second straight game with Douglas making his game-clinching interception.

Douglas is the most obvious example after making one of the biggest plays of the season. … Cobb had his second two-touchdown performance of the season. That gives him four touchdown catches. He hasn’t had more touchdown receptions than that in a season since 2015, when he had six.

LB Jaylon Smith didn’t appear on the injured list all week but was still left inactive.

Kylin Smith and Tonyan weren't the only Packers knocked out of Thursday's game. DE Kingsley Keke left with a concussion.

24 – The Packers have scored exactly that many points in three straight games.

After handing Arizona its first loss, the Packers wait to see how the NFC's other one-loss teams (Tampa Bay, Dallas and the Los Angeles Rams) fare this weekend while getting ready for their game with the Chiefs.