Injuries mounting for Chiefs with Bills matchup on horizon 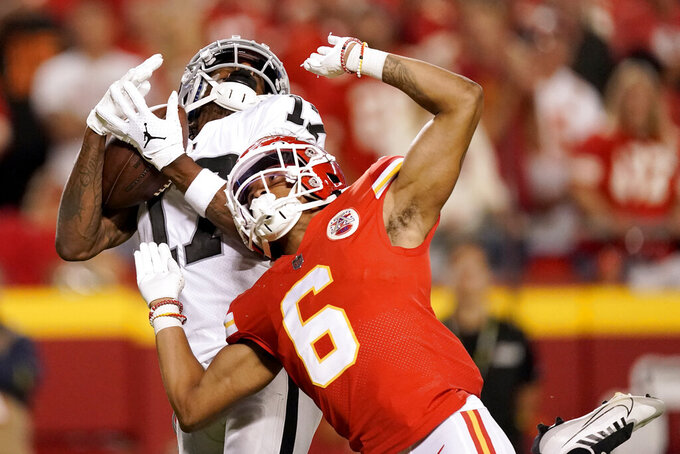 KANSAS CITY, Mo. (AP) — The banged-up Kansas City Chiefs could be missing two more defensive starters and a key contributor in the secondary when they face the Buffalo Bills on Sunday in a rematch of their thrilling overtime victory in January's playoffs.

The Chiefs already were missing starting linebacker Willie Gay Jr., who will finish a four-game suspension for an offseason incident, and still could be without first-round draft pick Trent McDuffie at cornerback for the fifth consecutive game.

Chiefs coach Andy Reid said cornerback Rashad Fenton would miss practice Wednesday with a hamstring injury, and that backup safety Bryan Cook remained out with a concussion. They were injured in Monday night's win over the Raiders along with defensive tackle Tershawn Wharton, who is likely headed to injured reserve after tearing his left ACL.

The Chiefs made a series of moves to fortify their roster, waiving defensive end Benton Whitley and signing defensive tackle Taylor Stallworth from the practice squad. Stallworth has appeared in 50 games over four seasons with the Saints and Colts, and was close to making the 53-man roster out of camp until he was beaten out by Khalen Saunders.

The Chiefs also cut defensive tackle Cortez Broughton from the practice squad and signed running back Wayne Gallman to it. Gallman played in 53 games in four seasons with the Giants before splitting last season with the Falcons and Vikings.

The biggest injury would be to Fenton, who started eight games last season and the first five this season, though he has struggled in recent weeks. He was beaten by the Raiders' Davante Adams on a long touchdown reception Monday night, and he was flagged for pass interference while trying to guard him, ultimately leading to another touchdown.

The Chiefs would likely turn to Joshua Williams, a fourth-round pick who has mostly played special teams, to start opposite fellow rookie Jaylen Watson. Williams helped to cover Adams in the final seconds as Kansas City preserved its win.

“I always go back to (GM Brett) Veach and the job his guys do,” Chiefs coach Andy Reid said. “This kid went to a smaller school, he's very intelligent, he's big, but he hasn't played at this level. He jumped right into training camp and OTAs and worked, and you pull for that kid, and doing what he's doing.”

Reid did say that McDuffie, who hurt his hamstring in the opener against Arizona, began practice Wednesday, beginning a 21-day window in which Kansas City must activate him or shut him down for the season. But the coach made it sound as if McDuffie would be back on the field sooner than later, and that Sunday was a longshot possibility.

“He's been rehabbing and we'll just see how he does,” Reid said. “He's been going full speed with his rehab.”

Defensive end Mike Danna was back at practice Wednesday after missing his third consecutive game with a calf injury, as was kicker Harrison Butker, who has practiced sparingly while recovering from a sprained ankle in the opener.

His replacement, Matthew Wright, set a franchise record Monday night with a 59-yard field goal against the Raiders. But he also missed a 41-yarder earlier in the game, which may have led Reid to try a failed 2-point conversion late in the game.

The Chiefs are still a week away from getting Gay back on the field, though he was able to be in the facility for the second consecutive week. Darius Harris, his replacement, led the Chiefs with eight tackles and a sack against Las Vegas.

“Great kid, very hard worker. Even on the scout team he gives you 110 percent,” Reid said, “so you just figured he would get in there and do fine. He's been able to digest the offense well and stay on top of that.”

NOTES: The Chiefs are 2 1/2-point underdogs against Buffalo, the first time QB Patrick Mahomes has not been favored in a game at Arrowhead Stadium. “It is what it is,” Mahomes said. ... RG Trey Smith, who missed Monday night's game with a pectoral injury, was back at practice Wednesday. ... RT Orlando Smith delivered the quote of the day when describing his pancake block that sprung RB Jerick McKinnon's long run against Las Vegas. “I saw two defenders,” he said. “Just chose one. Happened to put him on his (rear end).”