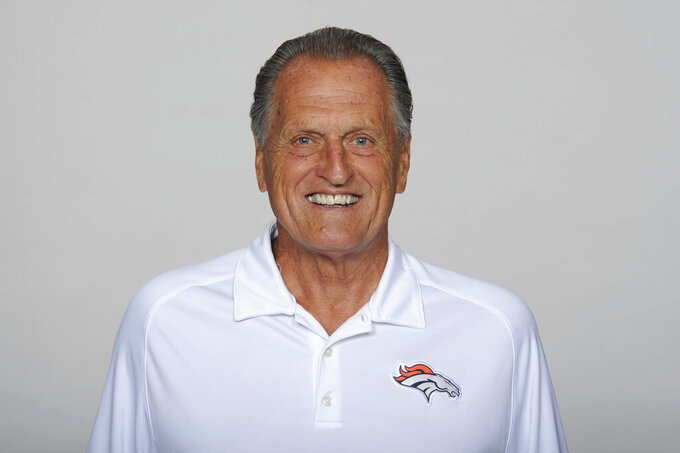 FILE - This is a 2013 file photo showing Alex Gibbs of the Denver Broncos NFL football team. Gibbs, the innovative offensive line coach whose zone-blocking scheme helped lead the Denver Broncos to back-to-back Super Bowl triumphs in the 1990s, has died at age 80, the team said. The team said Gibbs died Monday, July 12, 2021, from complications of a stroke with family by his side in his Phoenix home. (AP Photo/File)

The team said Gibbs died Monday from complications of a stroke with family by his side in his Phoenix home.

“We are deeply saddened by the passing of Alex Gibbs, who had a profound impact on the Denver Broncos and the National Football League as an offensive line coach,” the Broncos said in a statement. “During his 14 years with the Broncos, Coach Gibbs left a lasting legacy on this league with his innovative blocking schemes and outstanding teaching ability.

“He helped the Broncos to Super Bowls during three different decades — including back-to-back world championships — while forging a reputation as one of the greatest assistant coaches in NFL history,” the team added.

“Our hearts go out to Alex’s wife, Trina, and the entire Gibbs family as well as Alex’s many former players and fellow coaches.”

His zone-blocking scheme relied on agile linemen moving together as one at the snap to create cut-back lanes for the running backs as opposed to the power scheme that relies on linemen to block the defender in front of them.

The scheme was key to the Broncos' dominant ground game behind Hall of Famer Terrell Davis that powered Denver to championships in Super Bowls 32 and 33 against Green Bay and Atlanta, respectively.

Aside from his reputation as one of the NFL's best assistant coaches, Gibbs was known for his colorful language. Former Broncos O-lineman and current broadcaster Mark Schlereth said ex-head coach Mike Shanahan used to have the offensive line work out as far away from the crowds as possible during Broncos training camps.

“He would purposely put us like in the middle of nowhere, where like the fans weren't allowed,” said Schlereth, a morning host on 104.3 The Fan in Denver. “'Come watch us practice' was R-rated.”

Schlereth, however, said Gibbs' crass language “was part of that camaraderie, it was part of the group, it was fun. We laughed about it.”