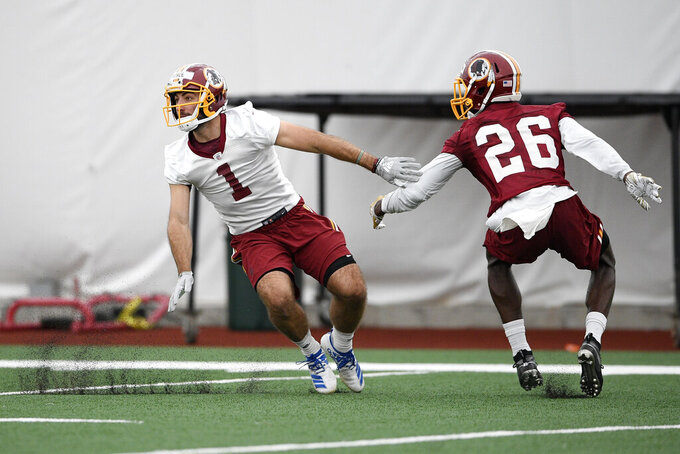 Only when he got to college at Delaware did Vinny fully appreciate the inspirational tale of Vince Papale earning a spot with the Philadelphia Eagles at age 30 despite never playing football before. The younger Papale was amazed his dad made it to the NFL, and now he's trying to follow in those footsteps.

More than four decades after Vince Papale went from part-time bartender, nightclub doorman and substitute teacher to Eagles receiver, Vinny got rookie camp tryouts with the Oakland Raiders and Washington Redskins and is trying to make a name for himself in the league.

"I'm a little younger — he was 30," Papale said this weekend after a Redskins rookie minicamp practice. "But it's definitely cool just to have another opportunity to play at the next level."

Papale almost didn't get this opportunity. He broke his left leg his freshman season at Delaware and tore ligaments in his right knee the next year, so it was a battle just to get on the field.

As a senior, Papale had 36 catches for 618 yards and six touchdowns and was so good on third down that his father said the team had an expression, "Third and Vinny."

"Those setbacks, they just ruin people, but he came back stronger," Vince said in a phone interview on Monday. "I'm just so proud of how hard he works and the adversity he's battled through to get there."

Vince is proud that his son doesn't harbor any resentment toward him for living under the shadow of "Invincible" and having to answer the same questions over and over. But Vince sees parallels because Redskins President Bruce Allen's father, George, was a mentor of longtime coach Dick Vermeil, who gave him his shot off a tryout in 1976.

Vinny has received some fatherly advice from his dad about the game.

"He just said there's limited opportunities," Vinny said. "Every time I went on the field or was in a play, just make the most of that opportunity and make sure I was noticed on film. That's what he told me."

At Washington's rookie camp, Papale had his name written in magic marker on a piece of tape on his helmet but didn't get too much flak from other players because they didn't know much about him. Vinny said most people think the movie is about his grandfather, anyway, but the attention didn't bother him.

Papale wanted attention for his play on the field and Redskins coach Jay Gruden came away impressed.

"He's a tough guy," Gruden said after Saturday's workout. "He runs everything hard and plays with a lot of passion without a doubt. Very similar to the movie."

Even though Papale wasn't among the six players the Redskins signed out of rookie camp, that doesn't mean he won't catch on somewhere.

"Invincible II" could be a real-life sequel if either Jay or brother Jon — who coaches the Raiders — decides to sign this Papale. His father said the important thing is that "Vinny is his own man" who would get a job on his own merits.

"He's got talent, and I'm just hoping that somebody out there like Jay or like Jon sees what he's got and gives him a shot," Vince said.

Vinny Papale was invited to the Eagles' pre-draft pro day, but his father said it doesn't matter what color the uniform is as long as the NFL dream materializes. If that's Redskins burgundy and gold, Vince is on board with that, even though he'll always have a connection to the Eagles.

Vince said his son wants to go into special forces if the NFL doesn't happen. But with two tryouts down, his family is optimistic.

"I'm very confident that he's going to get that opportunity," Vince said. "God bless that person or team that gives him the shot because they won't be disappointed."