It's Fitzpatrick vs. Heinicke in Washington QB 'competition' 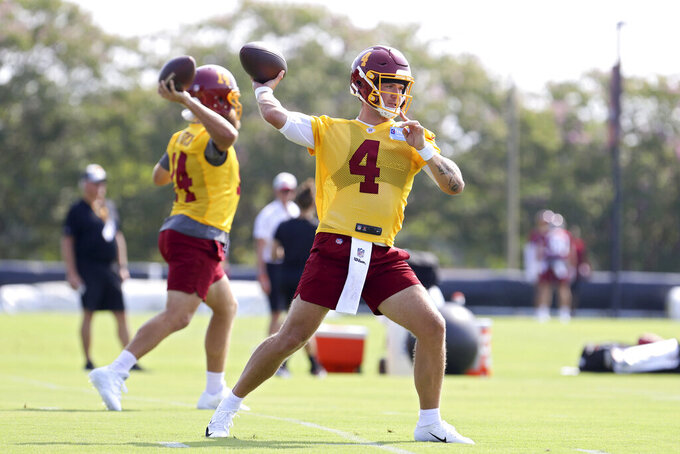 RICHMOND, Va. (AP) — Taylor Heinicke does not think there is a quarterback competition at Washington’s training camp.

A year after waking up in his sister’s house wondering what to do every day, he’s just happy to get some snaps with the first-team offense and trying to stay ready in case anything happens to presumed starter Ryan Fitzpatrick.

After Ron Rivera regretted handing Dwayne Haskins the starting job during camp in 2020, the veteran coach was determined not to make the same mistake. It would take an injury or unforeseen circumstances for Fitzpatrick not to be Washington’s Week 1 starter, but stranger things have happened and everyone in the situation wants to be prepared.

“I come in every day just trying to get better, and I think he thinks the same thing,” Heinicke said Friday. “We don’t really treat this as a competition — more as, ‘Hey, let’s help each other get better.’”

It helps that they are at the opposite ends of the career spectrum.

Fitzpatrick at 38 is on his ninth team and has started 146 games over 16 NFL seasons. His 13 comebacks and 18 game-winning drives earned him the nickname “FitzMagic.”

Heinicke was a Football Championship Subdivision star at Old Dominion and bounced around four different organizations before deciding to take college classes online. That’s what he was doing when Washington called him to be their so-called “quarantine quarterback” last year before stepping in when Alex Smith was injured and putting on a surprisingly strong performance in a first-round playoff loss to Tampa Bay.

On paper, the decision looks simple based on Fitzpatrick’s experience alone. Before naming the Harvard product the starter, Rivera is taking into account each QB’s resume along with what they show on the field in practice and preseason games.

“(Fitzpatrick) does a lot of things that you sit there and you watch him and you say, ‘Well, he does that because he’s a veteran,’” Rivera said. “You watch Taylor make a mistake: ‘Oh, that’s inexperience, man. He’s going to have to learn and he’s going to have to grow.’”

And then there’s Kyle Allen, a favorite of Rivera’s who knows offensive coordinator Scott Turner’s system well from their time together in Carolina. Allen is coming off a broken left ankle and could be in the mix soon, but for now it’s Fitzpatrick and Heinicke.

No matter what the situation, Fitzpatrick is not fazed. A decade and a half in the league has taught him not to dwell on uncertainty and concentrate on making himself and his teammates better.

“What’s productive is just to focus on myself every single day, focus on the things I need to work on — and with that, being the leader of a unit, sometimes my focus isn’t just about me,” Fitzpatrick said. “That was something I had to learn throughout my career: that it was all about me because there’s only so much I could control. Focusing on what I could control and doing the things that put me in a better situation to make me better.”

Washington needs better — or at least more — from the quarterback position than last season, when Smith was more of a game manager than a gunslinger when he guided the team to five victories in its final seven games to win a weak NFC East and make the playoffs.

Fitzpatrick showed a little of how he’s different in practice Friday, connecting with top receiver Terry McLaurin on a deep ball down the field. With fans cheering from the necessary distance away, McLaurin yelled back toward the line, “I see you Fitz!”

“He really does a good job of empowering us and also putting us in good situations to be successful,” McLaurin said. “He knows how to get us in the right play and get the receivers into the best route possible for (the right) type of leverage and things like that. And then (there is) just his ability to just give us opportunities down the field.”

Maybe that’s why Heinicke doesn’t see an opportunity to win the starting job, at least yet. But he is a popular teammate and a fan favorite, especially in Richmond, 100 miles from where he starred at ODU.

“I try to not let it get to me too much,” Heinicke said. “I think it’s pretty cool because I’ve worked very hard for it. But there’s still a lot of work to be done and to just go out there and win some games and see what happens.”