It's time: After 2 years of learning, Cardinals ready to win 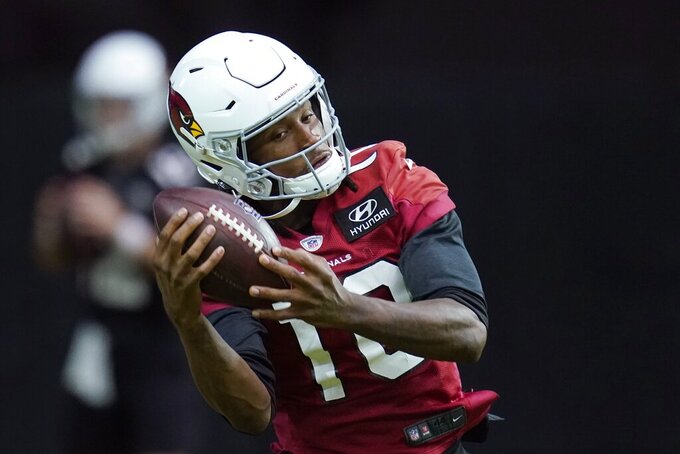 TEMPE, Ariz. (AP) — Arizona quarterback Kyler Murray and coach Kliff Kingsbury had a two-year honeymoon to adjust to life in the NFL. There were some good moments, some bad moments, and that inconsistency was reflected in an 8-8 record one season ago.

Now, the training wheels come off.

The Cardinals are under considerable pressure to make the playoffs this year after just missing the postseason in 2020. That's just fine for Murray, who said his expectations will always be sky high.

“I'm not trying to be average, I never will be,” Murray said. “I'm always striving to be perfect. Obviously, being perfect is very tough, very hard. Maybe it's not a thing. But we're going to get damn close."

The 24-year-old Murray is the unquestioned face of the Cardinals as they try to make headway in a tough NFC West that also includes the 49ers, Seahawks and Rams.

The Cardinals made multiple moves in the offseason in an effort to bulk up the roster, adding three-time Defensive Player of the Year J.J. Watt, seven-time Pro Bowl receiver A.J. Green and three-time Pro Bowl center Rodney Hudson.

Those are obviously some big names with big resumes, but adding them also represents a gamble. All three players are in their 30s and the NFL is notoriously tough place to last more than a decade.

“I love what they're about, that's the bottom line,” Kingsbury said. "All those guys have been incredible professionals, played at a high level, played in big games and have done it the right way for a long time. That type of leadership is outstanding for any program.

“Then you throw in that they can all still play at a high level.”

Arizona should still have one of the league's most interesting offenses. Murray threw for 3,719 yards and 26 touchdowns while also running for 819 yards and 11 scores. DeAndre Hopkins returns after an All-Pro season that included 1,407 yards receiving and six touchdowns.

Kingsbury and general manager Steve Keim made a surprise move during the offseason when they anointed rookie linebacker Zaven Collins as a starter before preseason camp began. The 6-foot-4, 260-pound Collins was the No. 16 overall pick out of Tulsa. He's expected to join second-year linebacker Isaiah Simmons as one of the future anchors of the defense.

“I felt like we clicked very early,” Simmons said near the beginning of camp. “As a player, you know guys that you're compatible with on the field. We're definitely compatible. Everything's been smooth sailing so far. We're both doing some learning, figuring out how we're going to run the defense."

FITZ IN THE FUTURE?

It seems unlikely at this point, but there's still the possibility 11-time Pro Bowl receiver Larry Fitzgerald returns for an 18th season.

Fitzgerald has played his entire career in Arizona and is one of the most productive receivers in NFL history. He sounded like a man close to retirement during a radio interview in August, though he kept the door open for a return.

“To be honest with you I just don’t have the urge to play right now,” Fitzgerald said in a Sirius/XM interview. “I don’t know how I’ll feel in September, October, November moving forward, but I just, today, I just don’t have that urge. And I think I have to be respectful of that. Football is not one of those games you want to walk out there and play and not be fully engaged and ready to prepare and do the things necessary that you need to do.”

The Cardinals hope they'll get a boost from the return of linebacker Chandler Jones, one of the NFL's elite pass rushers over the past few seasons before a biceps injury kept him out for much of 2020.

Jones had 19 sacks and led the league with eight forced fumbles in 2019. He's in the last season of an $82.5 million, five-year contract and has made it clear he'd like a new deal.

But Kingsbury said the outgoing Jones hasn't let it affect his work.

“Phenomenal human being and obviously a phenomenal football player," Kingsbury said. “We're all excited to have him back healthy. Can't wait to watch him this season.”

The Cardinals hope they've improved on special teams by adding veteran kicker Matt Prater. The 37-year-old is a two-time Pro Bowler entering his 15th NFL season. He spent the past seven years with the Detroit Lions.

Prater replaces Zane Gonzalez, who made some big kicks in 2020, including a handful of important ones. Prater has made a career 83.2% of his field goal attempts compared to 78% for Gonzalez.

The Cardinals have a tough early-season schedule with three of their first four games on the road. They’ll start at Tennessee before returning home to face Minnesota, Then they’ll have back-to-back road games at Jacksonville and the NFC West rival Los Angeles Rams.

28 minutes ago
By Pat Graham 2 hrs ago
By Arnie Stapleton 6 hrs ago
By W.g. Ramirez 9 hrs ago
By Brett Martel 11 hrs ago