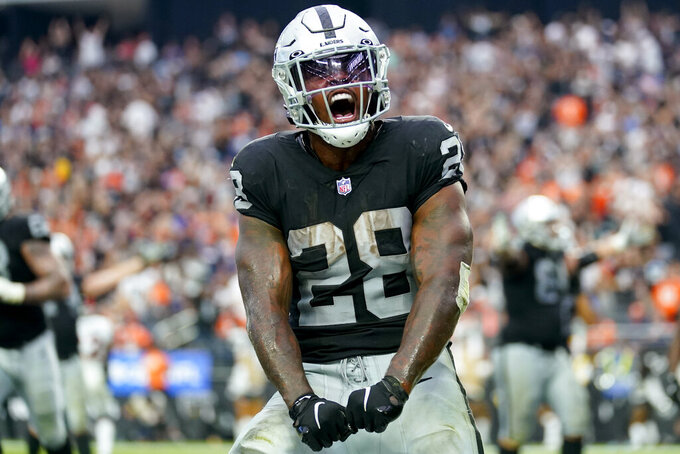 Las Vegas Raiders running back Josh Jacobs (28) celebrates his touchdown against the Denver Broncos during the second half of an NFL football game, Sunday, Oct. 2, 2022, in Las Vegas. (AP Photo/Abbie Parr)

He opted to take the ball after winning the coin toss and put the game in Josh Jacobs' hands.

Jacobs delivered with a career-high 144 yards rushing and McDaniels earned his first win as Raiders coach with a 32-23 victory over the Denver Broncos on Sunday.

“I came in saying when I get an opportunity to really put my stamp on this game, I'd let my presence be felt,” Jacobs said.

He did just that, carrying the ball 28 times, catching five more passes and scoring two touchdowns. He had a 10-yarder in the second quarter and a game-sealing 7-yarder late in the fourth that made sure the Raiders (1-3) wouldn't have another late-game collapse after blowing a 20-point lead two weeks ago against Arizona.

The Raiders got 58 of their 212 yards rushing on that final drive as McDaniels achieved his goal of wearing down the Broncos.

The Raiders came through with big plays on both sides of the ball late after a handful of mishaps led to three straight one-score losses to open McDaniel's first season in Las Vegas.

The victory was the first as a head coach for McDaniels in 4,341 days since his final win for Denver in 2010.

"I don’t want to make this about me; this is just our team trying to hold our home turf here against another division opponent,” he said.

“We’re making progress,” McDaniels said. “We’re heading in the right direction, relative to trying to get to the point where we don’t have to do as much of that.”

Special teams. The Raiders had a botched punt return by Tyron Johnson that left them backed up in the first quarter to set up a Denver touchdown. They also failed to recover a surprise onside kick, had a missed extra point by Daniel Carlson and allowed punt returns by Montrell Washington that went for 30, 20 and 16 yards.

Amik Robertson. The third-year cornerback made the play of the game when he scooped up a fumble by Melvin Gordon III and returned it 68 yards for the Raiders' first TD on special teams or defense since 2019. Robertson also fared well in coverage after allowing a deep catch early to Jerry Jeudy.

Chandler Jones. The Raiders' big offseason addition is still searching for his first sack of the season. Jones, who had at least 10 sacks the last seven seasons he played more than 10 games, has only six tackles, no quarterback hits and just one tackle for loss.

LB Denzel Perryman is in concussion protocol after getting hurt in the first half. ... CB Rock Ya-Sin (knee), WR Hunter Renfrow (concussion) and TE Foster Moreau (knee) could be back this week.

5 — Carr used his legs to run for a career-high five first downs. Two came on short-yardage sneaks and three more on scrambles as he ran for 40 yards in all. It marked just the third time in the past 20 seasons that a Raiders QB generated at least five first downs in a game, with Marcus Mariota getting eight in 2020 against the Chargers and Daunte Culpepper five in 2007 against Miami.

The Raiders visit Kansas City on Monday night, looking for their second road win against the Chiefs in their last nine trips to Arrowhead.