Jags have plenty to offer in search for new general manager 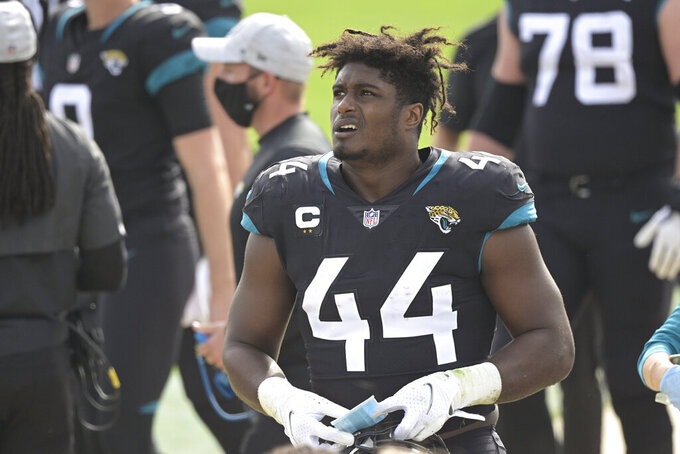 Jacksonville Jaguars linebacker Myles Jack (44) in the bench area during the first half of an NFL football game against the Cleveland Browns, Sunday, Nov. 29, 2020, in Jacksonville, Fla. (AP Photo/Phelan M. Ebenhack) 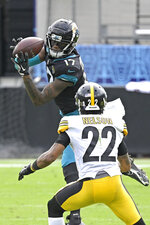 JACKSONVILLE, Fla. (AP) — The Jacksonville Jaguars have arguably the most attractive general manager opening in the NFL. It might not be close, either.

They have several building blocks in place, including pass rusher Josh Allen, linebacker Myles Jack, running back James Robinson and receiver DJ Chark. They have 11 draft picks in 2021, including two first-rounders and probably four in the top 50. They will have close to $100 million in salary cap space.

Throw in the Florida weather, nearby beaches, no state income tax and a patient owner who’s willing to spend big, and the Jaguars (1-10) should be able to entice just about anyone to come to Jacksonville and take over a team poised for a quick turnaround.

The next GM will be able to select his quarterback and his head coach. He also will be able to put his touch on the league’s youngest roster that’s shown potential by playing closer-than-expected games against Houston, Green Bay and Cleveland in November. Jacksonville had chances to tie or win each in the waning minutes.

Khan also kept coach Doug Marrone and his staff in place through the end of the season, almost certainly ensuring a total reboot for the floundering franchise.

“I think there’s a foundation," Marrone said. "I think it’ll attract many people. Who wouldn’t want to work for someone that’s going to give you all the support that you need? That’s what you want.”

Change was long overdue. It probably should have happened in 2016, after Jacksonville lost 48 of 62 games with Caldwell and coach Gus Bradley directing a roster rebuild.

It probably should have happened in 2019, after personnel chief Tom Coughlin, Caldwell and Marrone dismantled one of the most talented teams in franchise history.

Near the end of their tenure, the NFL Players Association had warned free agents about signing with Jacksonville because of Coughlin’s overbearing ways. The locker room was filled with infighting publicly, and the coaching staff and front office were pointing fingers at each other privately.

Khan stopped short of a house cleaning both times, first pinning blame on Bradley and then on Coughlin.

Caldwell and Marrone got another chance to show what they could do without Coughlin. They failed miserably, losing more consecutive games in a single season than anyone in the team's previous 25 years.

They gambled on second-year QB Gardner Minshew, and he showed holes in his game. They rolled the dice with the league’s youngest defense, and it allowed at least 30 points in six straight games. And the team’s latest first-round picks, cornerback CJ Henderson and defensive end K’Lavon Chaisson, look like reaches at Nos. 9 and 20, respectively.

Caldwell couldn't defend any of it, especially not the mounting losses.

It was time to go in a different direction.

The Jags need better execution with 2-point conversions. They have been successful twice in eight attempts, including three straight misfires. They had chances to tie Houston and Cleveland with 2-point tries late and failed both times.

Rookie Collin Johnson caught four passes for a career-high 96 yards against the Browns, including a 46-yard score in the first quarter. It was the second-longest touchdown by a Jacksonville player in 2020 and the longest TD reception by a Jaguars rookie since 2017.

Minshew (thumb) was inactive Sunday despite throwing last week, and with veteran Mike Glennon playing well in his first start since 2017, it’s possible Minshew might not see the field again in 2020.

Rookie defensive tackle DaVon Hamilton’s right knee isn't "as bad as we thought,” Marrone said. Hamilton is headed to injured reserve, but he should be healthy enough for offseason workouts in March.

Jacksonville has a lose-lose game at Minnesota on Sunday. If the Jaguars lose, they lower the second-round pick they got from the Vikings in exchange for DE Ngakoue. If Jacksonville wins, it risks dropping out of the second overall draft spot.