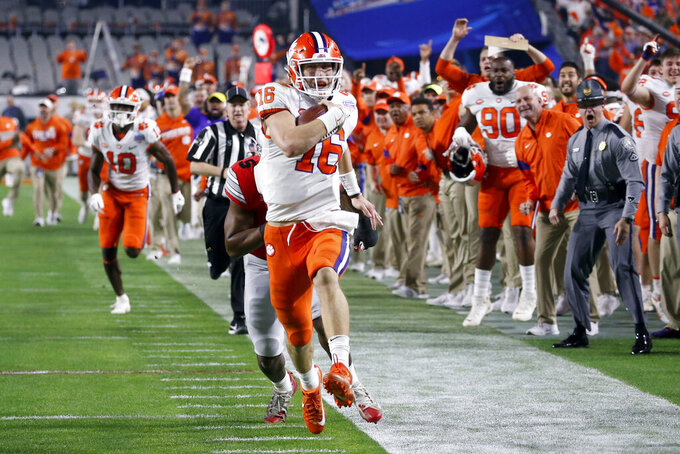 FILE - Clemson quarterback Trevor Lawrence runs for a touchdown against Ohio State during the first half of the Fiesta Bowl NCAA college football playoff semifinal in Glendale, Ariz., Saturday, Dec. 28, 2019, in Glendale, Ariz. Lawrence is widely considered the best quarterback prospect to come out of college since Andrew Luck nearly a decade ago. (AP Photo/Ross D. Franklin)

Five of the first 65 picks, a chance to land several young starters to build the team around. The No. 1 choice, an opportunity to grab Clemson star Trevor Lawrence and secure a franchise quarterback for the foreseeable future.

It was too good to pass up.

Now, Meyer hopes to not mess it up.

“As a coach, I find myself always looking at need and that’s where you have to be cautious (or) you start chasing players,” Meyer said this week. “The whole idea of value is completely new to me. … I’m a quick learner. I’ve been working at this now for about three months, and the last three to four weeks, this has been our entire life in that room watching video, stacking the board.

“So trusting the board is key. I’m at the point, almost there, that I will trust it. But as a coach, I can see where (you say), ‘We need this, we need this and we need this,’ and that’s where you get yourself in trouble. It’s been a great learning experience for me.”

Still, Meyer is admittedly nervous heading into the NFL draft. That’s normal for the 56-year-old control freak whose passion and prowess led to three national championships at the college level.

Meyer and his staff have already gone through a couple of dry draft runs, including mocks that include pick Nos. 1, 25, 33, 45 and 65. He wants to know where everyone will be sitting, what everyone’s role will be and some details few others might imagine, down to which computer and television screen to watch for the most up-to-date information.

“We’re going to be on point,” Meyer said.

The first pick will be easy.

Meyer and the Jaguars have been locked on Lawrence for months. He’s widely considered the best quarterback prospect to come out of college since Andrew Luck nearly a decade ago and will pair with Meyer as the faces of the franchise.

The Jaguars have done just about everything short of announce Lawrence as their first pick. Meyer stood a few feet from Lawrence for most of Clemson’s pro day because “you want to hear it leave his hand, listen to it go by you.”

Meyer already gave Lawrence (and a few other QBs) a playbook and has held several Zoom sessions with him.

“Ultimately, the owner’s going to pull that ticket on that one,” Meyer said this week.

General manager Trent Baalke made it even clearer when asked what he’s learned about Lawrence during the draft process.

“Well, the easiest way to answer that is no negatives,” Baalke said. “All the research we’ve done, you’re always looking for the stars to align when you’re looking at prospects, whether that be from a physical, mental, character aspect, whatever the case may be. With his situation, like many others in this draft, the stars all align and that’s what you’re looking for.”

Jaguars fans would be devastated if the team did anything other than draft Lawrence with the top pick. After all, hundreds of them banded together via a social media campaign and raised more than $11,000 to buy the quarterback and his new bride a wedding gift. They purchased a $300 toaster for Trevor and Marissa and donated the rest to a charity of Lawrence’s choice.

Lawrence thanked them on Twitter and responded by donating $20,000 to charities in Jacksonville and said he and Marissa “hope to be a part of your community soon.”

It should be official shortly after the draft begins Thursday night. Lawrence won't attend the league event in Cleveland. Instead, he's expected to be introduced in Jacksonville on Friday.

The Jaguars are picking in the top 10 for the 13th time in the last 14 years, a stunning stretch of futility. Of the previous 12 selections, only the last two – defensive end Josh Allen (2019) and cornerback CJ Henderson (2020) – remain on the team.

Aside from quarterback, Jacksonville’s biggest need is at tight end. The Jaguars opted not to exercise an option in Tyler Eifert’s contract and traded oft-injured Josh Oliver to Baltimore for a conditional pick.

They added blocking tight end Chris Manhertz in free agency and re-signed James O’Shaughnessy. But Meyer has made it clear the position group needs more work.

Jacksonville has had 15 tight ends catch passes in the past three years, with only Eifert making more than 30 receptions in a season.

Jacksonville has drafted just nine quarterbacks in its 26-year history, with three of those (Jake Luton, Gardner Minshew and Tanner Lee) coming in the last three years. Only three of those nine were taken in the first round: Byron Leftwich (2003), Gabbert (2011) and Bortles (2014).