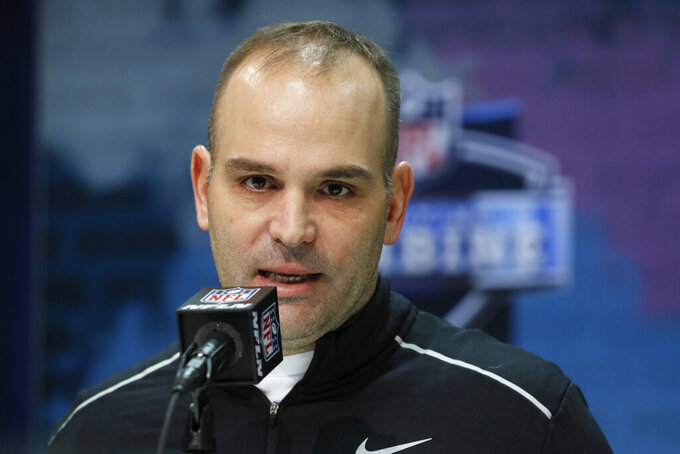 JACKSONVILLE, Fla. (AP) — Jacksonville Jaguars owner Shad Khan considered firing general manager Dave Caldwell last year. He ultimately gave him a chance to show what he could do without personnel chief Tom Coughlin wreaking havoc on the salary cap and the locker room.

Caldwell came up well short of the owner's winning expectations, making Khan’s decision an easy and somewhat expected one.

Khan fired Caldwell on Sunday after the team's 10th consecutive loss, its single-season record. The move sends a clear message that the small-market franchise is headed in a new direction.

“Dave was exceptionally committed and determined to bring a winner to Jacksonville, but unfortunately his efforts were not rewarded with the results our fans deserve and our organization expects," Khan said after a 27-25 loss to Cleveland. "Our football operation needs new leadership, and we will have it with a new general manager in 2021.”

Khan will keep coach Doug Marrone and his staff to finish out the season and likely let the next general manager decide their fate. It would be stunning to see Marrone return in 2021. Former San Francisco executive Trent Baalke will serve as interim GM.

The Jaguars are 39-87 since Khan gave Caldwell his first GM job in 2013, falling a few plays shy of the franchise’s first Super Bowl in 2018 and miring mostly in mediocrity since. The Jaguars (1-10) have dropped 16 of their last 19 games, including 11 by double digits.

Caldwell drafted and signed plenty of talent along the way, but he whiffed repeatedly while trying to fill a gaping hole at quarterback. He chose Blake Bortles with the third overall pick in 2014, and nearly four years later — after everyone in the league knew the QB's flaws — he gave Bortles a three-year, $54 million extension that included $26.5 million guaranteed.

When Bortles didn’t pan out, Caldwell signed Super Bowl 52 MVP Nick Foles to a four-year, $88 million deal that included $50.125 million guaranteed. The oft-injured Foles broke his collarbone in the 2019 season opener, returned two months later and got benched for good three games into his return.

Caldwell and Marrone gambled on second-year pro Gardner Minshew this year, only to see the sixth-round pick exposed as the team started 1-6. Another rookie, fellow sixth-rounder Jake Luton, wasn’t any better.

The Jaguars will try again with what likely will be another top-five pick in 2021, with most expecting them to draft Clemson’s Trevor Lawrence or Ohio State’s Justin Fields should they enter the draft.

Khan couldn’t let Caldwell make that all-important selection, even if it turns out to be a no-brainer.

Nonetheless, Caldwell built the core of the roster that won a division title in 2017 and nearly upset New England in the AFC championship game. He drafted one of the best receivers (Allen Robinson, 2014), the best cornerback (Jalen Ramsey, 2016) and one of the best pass rushers (Yannick Ngakoue, 2016) in franchise history. But he also failed to re-sign any of the three.

First-round picks have been as much a part of his undoing as quarterbacks.

Left tackle Luke Joeckel (2013) is out of the league. Bortles (2014) also was out until Denver signed him to its practice squad this season. Defensive end Dante Fowler (2015), Ramsey (2016) and running back Leonard Fournette (2017) were considered headaches and traded. Defensive tackle Taven Byran (2018) is a first-round bust, and cornerback CJ Henderson and defensive end K’Lavon Chaisson look like 2019 reaches at Nos. 9 and 20, respectively.

In Caldwell’s defense, he didn’t have total control for some of those calls. Coughlin had final say over all football decisions for three years (2017-19).

Caldwell spent part of this offseason trying to clean up Coughlin’s mess. Khan essentially blamed the team’s struggles in 2018 and ’19 on its inaugural coach who failed to make a smooth transition to the front office.

Caldwell and Marrone were tasked with fixing the two most important parts Coughlin ruined in his second stint in Jacksonville: the salary cap and the locker room.

They parted with several key starters, including five-time Pro Bowl defensive lineman Calais Campbell, cornerback A.J. Bouye, safety Ronnie Harrison, Fournette, Foles and Ngakoue. They went extremely young on defense — getting stuck with a virtual offseason was a setback — and some of those guys seemed overwhelmed when thrust onto the field early.

They just will have a new GM and probably a new quarterback and coaching staff in 2021 and beyond.