Jets D-coordinator Williams has Adams' back as player 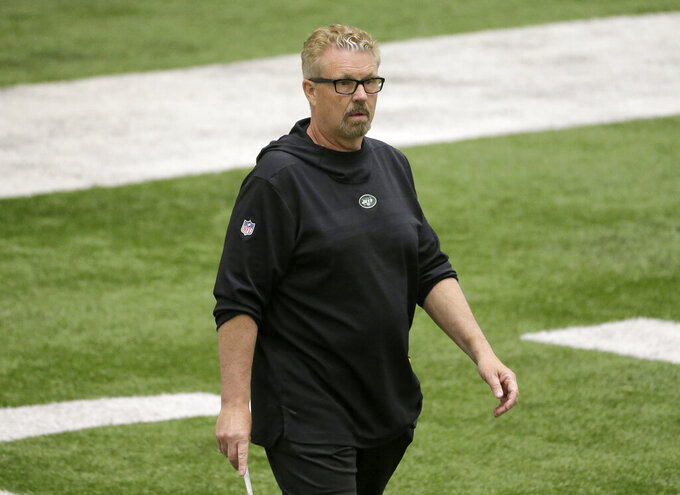 FILE - This May 23, 2019, file photo shows New York Jets defensive coordinator Gregg Williams during an NFL football team practice in Florham Park, N.J. Williams believes All-Pro safety Jamal Adams has the skills to be a Hall of Famer. Williams can only hope that Adams will keep displaying them in New York. (AP Photo/Seth Wenig, File)

Jets defensive coordinator Gregg Williams believes All-Pro safety Jamal Adams has the skills to be a Hall of Famer. Williams can only hope Adams will keep displaying them in New York.

Adams is in the midst of a standoff with the team over his contract. He has asked to be traded, and while general manager Joe Douglas has said he will listen to offers for any player, the Jets are under no obligation to redo Adams' rookie deal.

New York holds rights to the 24-year-old safety through next season and could also potentially use the franchise tag on him in 2022.

Williams only wants to look at what Adams brings to the Jets on the field and in meetings.

“I want him to feel good about being here and everything that’s going on,” Williams said during a conference call on Thursday. “I can’t wait to coach him again.

Williams had no interest in talking about Adams' contract situation. The longtime defensive coach and former head man for the Bills and, on an interim basis, for the Browns preferred to focus on why he “has Adams' back."

And to look back at some of the spectacular plays Adams made in his third pro season, Williams' first with the Jets. Williams recalled how, as the Jets blitzed, Adams basically was the lone man with a chance to stop Jaguars running back Leonard Fournette from scoring a long touchdown last season. Adams chased down Fournette.

“He has the ability to not only play as a defensive back, safety, but like a linebacker, like a rusher, like a run stopper,” Williams said, admitting he smiles often when talking about Adams. “He has multidimensional ability to play football. I have had several guys like that and have shown him films of how we utilized (those) guys in the past. We're going to use our guys to highlight their strengths, and he has multiple strengths.

Yet Adams could be gone from the team that selected him sixth overall in the 2017 draft. Adams has developed into one of the best selections the Jets have made in recent years, but he's also apparently developed a dislike for the franchise, judging by his social media posts.

Williams noted that he stays off social media, but he's fully aware of the impasse.

“My reaction personally (to Adams' demands) was completely level-headed and it is nothing I have any responsibility for," Williams said. “He knows when he gets inside the doors and white lines ... with us there is a chemistry. I have been through this before with other players. You can’t get too emotional, I get that.”

He also gets that the Jets could be without their top defender, probably their top player, when — or if — the season ever rolls around.

“We always have to have the next-man-up philosophy and we've been able to do that,” he said. “We had 18 guys who played for us last year on defense who had not played much on other defenses, guys had been cut from two up to eight times.”