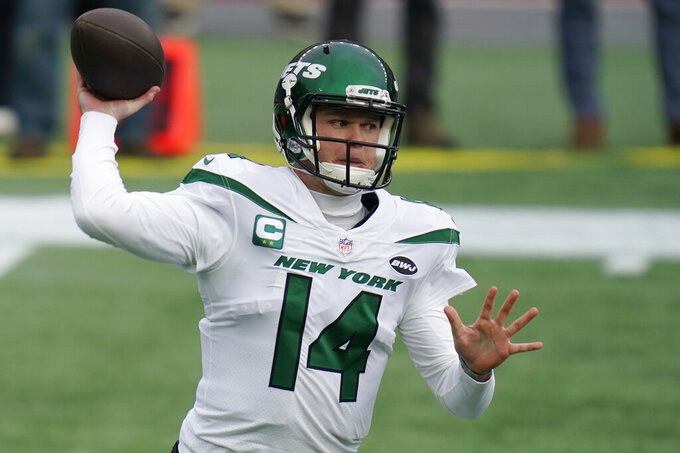 FILE - New York Jets quarterback Sam Darnold rolls out to pass against the New England Patriots in the first half of an NFL football game in Foxborough, Mass., in this Sunday, Jan. 3, 2021, file photo. The 23-year-old quarterback was considered an untouchable player on the roster only a year ago. General manager Joe Douglas has backed off that stance, though, and it could signal a major change at the position as free agency and the NFL draft approach. “I will answer the call if it's made,” Douglas said Wednesday, March 3, 2021, when asked if he'd listen to offers for Darnold from other teams. (AP Photo/Charles Krupa, File)

NEW YORK (AP) — Sam Darnold's time as the face of the New York Jets franchise might be nearing a disappointing end.

The 23-year-old quarterback was considered an untouchable player on the roster only a year ago. General manager Joe Douglas has backed off that stance, though, and it could signal a major change at the position as free agency and the NFL draft approach.

“I will answer the call if it's made,” Douglas said Wednesday when asked if he'd listen to offers for Darnold. “As it pertains to Sam, Sam’s, we think, a dynamic player in this league with unbelievable talent and who really, really has a chance to really hit his outstanding potential moving forward.

"But, you know, like I said earlier, if calls are made, I will answer.”

Douglas' comments during a video call that included new coach Robert Saleh marked the first time the GM directly acknowledged being willing to trade Darnold. And that has the quarterback's future with the Jets murky — just three years after being hailed as a potential long-term solution at a position that has long lacked consistent production.

“Our stance on Sam hasn’t changed,” Douglas insisted. “He’s an extremely talented player and he’s very smart, very tough. And we have no doubt that Sam is going to achieve his outstanding potential. Obviously, we’re in the process of getting as much information as we can leading up through free agency and the draft.”

Then-GM Mike Maccagnan traded up in the draft to select Darnold with the No. 3 overall pick in 2018, but the quarterback has not lived up to those lofty expectations because of inconsistency and injuries. Former coach Adam Gase acknowledged he didn't help Darnold enough to thrive, and the Jets lacked playmaking talent to help him take the next step in his development.

While Darnold has shown flashes during his three NFL seasons, there remain serious doubts as to whether he can lift the franchise. His contract also makes his status uncertain.

Darnold is entering the fourth year of his rookie deal and is scheduled to count $9.8 million against the Jets’ salary cap. While that's a manageable cost, New York has until May 3 to decide whether to exercise Darnold's fifth-year option — which would cost the Jets between $15 million and $20 million, fully guaranteed.

New York currently holds the No. 2 overall pick in the draft next month, and BYU's Zach Wilson and Ohio State's Justin Fields are among the names being mentioned as options for the Jets.

But they are also being mentioned as potential suitors for Houston's Deshaun Watson, who wants out — although the Texans have, for now, insisted they have no intention of dealing the star quarterback. If the Texans do change their stance, any deal would likely have to include lots of draft capital. And that's something it doesn't appear Douglas is willing to part with.

“Ultimately, for us to get to where the great teams are, the most consistent teams are, you do that through the draft,” Douglas said when asked his philosophy on hypothetically dealing picks for a star player. “For us to really be that team that’s consistently competing for Super Bowls, we have to hit on our draft picks.”

While rumors swirl, Douglas contended that the Jets, who are expected to have about $80 million to spend under the cap, have no immediate deadline on making a decision on Darnold or the quarterback position.

The Jets could also opt to stick with Darnold, for at least this year, and trade down from No. 2 to acquire several more roster-building draft picks.

“We're gathering as much information as we possibly can, especially as it pertains not only in free agency, but in this year’s draft class,” Douglas said.

— Douglas said in January that safety Marcus Maye, scheduled to be a free agent, would be a priority for the team this offseason. Maye appears to be a likely candidate for a franchise tag. Agent Erik Burkhardt was critical of the Jets' handling of Maye's situation in a Twitter post Tuesday night, but Douglas brushed off those comments.

“I’ve had a lot of great conversations with (Burkhardt), and you guys know how I feel about Marcus,” the GM said. “This is part of the business. This is part of negotiating. I don’t see this affecting our ability to get something done with Marcus that’s beneficial for both him and the team.”

— Saleh is optimistic the Jets, who haven't made the playoffs in an NFL-worst 10 seasons, can become contenders in the near future.

“We’re going to win championships here," the coach insisted. “To give you a timeline, I wish I knew, I’d go to Vegas. But we’re excited about the opportunity that we have in front of us.”

— Woody Johnson has returned as the Jets' chairman after a four-year stint as the U.S. Ambassador to the U.K. His brother Christopher served as the chairman and CEO in his absence, and is now the team's vice chairman.

“They’ve both been very supportive of the processes that we’ve had in place and continue to have moving forward," Douglas said. "It’s been great having Woody back. I feel like the communication has been outstanding. And it’s the No. 1 thing is that they both want to win.”