Jets keep Adams, Bell, Anderson: 'There was no fire sale' 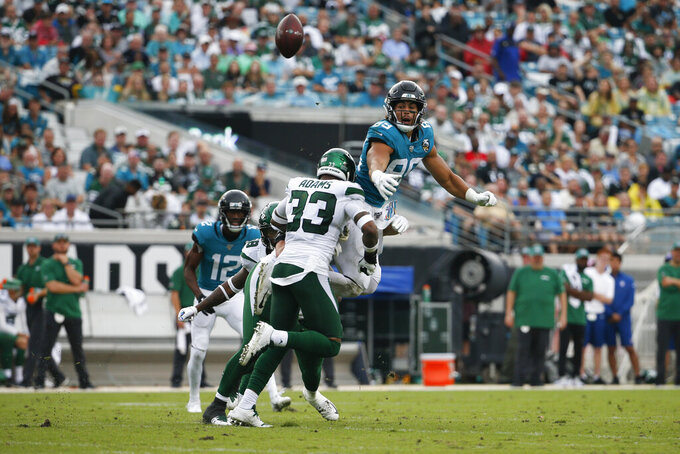 FLORHAM PARK, N.J. (AP) — Joe Douglas was busy answering his phone right up until the NFL trade deadline, listening to offers for some of the New York Jets' best players.

Despite all the back-and-forth conversations, Jamal Adams is staying put.

So are Le'Veon Bell and Robby Anderson.

"There was no fire sale," Douglas said Tuesday night without actually naming the players. "There's no garage sale going on with these players. We value these guys a lot. And, ultimately, the offers we received for these players didn't equal the value that we have for them."

At 1-6, Adam Gase and the Jets are struggling were seen as potential big sellers before the deadline. They helped fuel that speculation Monday, when Douglas traded defensive lineman Leonard Williams to the Giants for a third-round pick in 2020 and a conditional fifth-rounder in 2021.

Adams, Bell and Anderson were considered the most likely players to join Williams as ex-Jets, with Adams generating the most interest. Dallas tweeted that it tried to acquire him, but ultimately "couldn't land Jamal Adams." Baltimore was also reportedly in on talks with Douglas and the Jets.

Douglas acknowledged he "absolutely" views Adams, a Pro Bowl pick last year in his second season, as part of the team's long-term vision.

"I mean, I just want to reiterate, we were not shopping any of those players that were talked about today," Douglas said. "You guys see Jamal every day. He wears the (captain's) 'C' patch for a reason. The guy's an absolute warrior. He's the heartbeat of this team and this defense. He's got the exact mentality, and I told him from the beginning, from my first day here, he's a mission statement guy.

"When you talk about the traits you're looking for, that's Jamal."

But, moments after Douglas met with reporters, Adams sent two tweets indicating he was frustrated at being "shopped" by the Jets and insisted he never asked to be traded by New York.

"At the end of the week last week, I sat down with the GM and Coach Gase and told them I want to be here in New York," Adams wrote. "I was told yesterday by my agent that the GM then went behind my back and shopped me around to teams, even after I asked him to keep me here! Crazy business."

In a follow-up interview with 98.7 ESPN New York, Douglas was asked about Adams' tweets and reiterated that the Jets weren't actively trying to deal the safety — but were simply listening to teams' offers.

"In this case, it's a simple miscommunication," Douglas said. "Someone told him I was shopping him around. That's not true."

Douglas added that he doesn't take Adams' tweet personally, and the two will speak to clear things up.

Bell and Anderson also took to social media after the trade deadline, but both expressed excitement they were staying put.

"I'm happy as hell to be a New York Jet," said Bell, who signed a four-year, $52.5 million deal in March. "I'm happy to be here despite all the trade rumors and talks. I am here and I am happy to be here. But everybody just has to have a little bit of patience."

Anderson tweeted a video of Leonardo DiCaprio's character Jordan Belfort in "The Wolf of Wall Street" shouting to his employees: "I'm not leaving!"

With all three staying, they'll be counted on to try to help turn things around this season — and moving forward in the future.

In his news conference, Douglas was asked if he believes in any players being considered untouchable.

"Yeah, I think there are untouchable players," Douglas said, "especially when you're talking about franchise quarterbacks."

Douglas was then asked if the Jets have a franchise quarterback in Sam Darnold, who has struggled his last two games with seven interceptions and just one touchdown pass.

"I think we do," Douglas said. "I think we have a young man who's 22 years old who just finished his 17th game in the National Football League, and I think we see the growth, we see the ups and downs, but we see a guy who's made of the right stuff and a warrior mentality. And, we've got to take care of him."

That means, Douglas said, surrounding Darnold with playmakers and linemen to protect him.

That's a process that began when Douglas dealt Williams to the Giants, parting ways with a popular player who wasn't as productive as expected when he was drafted with the No. 6 overall pick in 2015.

"It's difficult to say goodbye to a player with that much ability, that much talent, that good of a person," Douglas said, "We felt the picks that we received for him just really gave us flexibility for the future."

Douglas, who was hired in June, took on some of the responsibility for the team's poor start saying everything needs to be done better "and that starts with me."

Douglas also showed support for Gase, despite many frustrated fans already calling for the coach to be fired. He called Gase "a great coach and a great communicator," and insisted the Jets don't lack competitiveness.

"I can promise you," Douglas said, "we are doing everything in our power so that we won't have a start like this again."