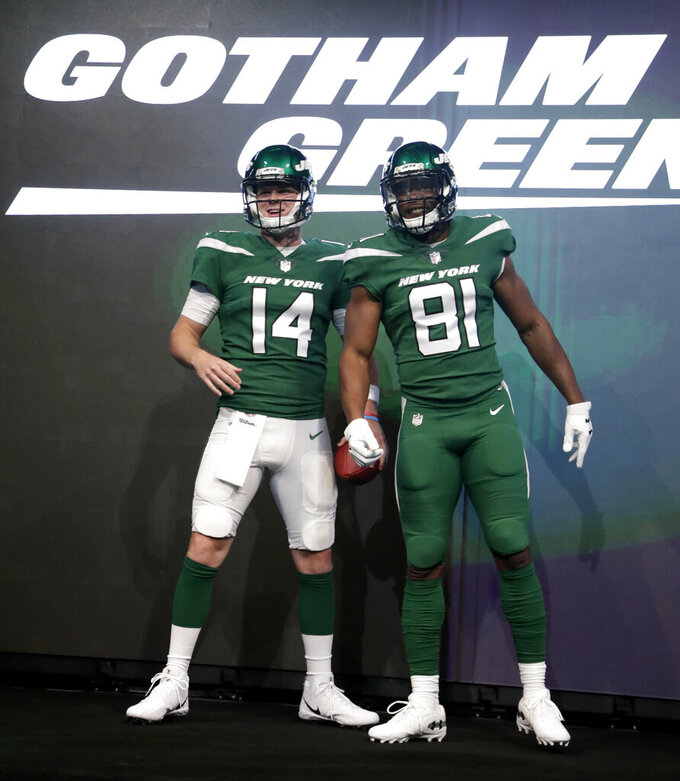 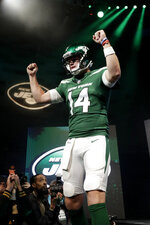 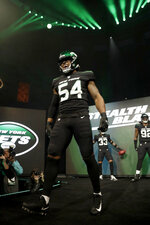 The New York Jets are the latest NFL franchise to switch up their playbooks and call for a major rebranding, with the team's revamped look unveiled Thursday night during a launch party at a midtown Manhattan ballroom.

"It's just a different swagger, man," safety Jamal Adams said. "It's something that this team needed."

Gone is the familiar hunter green and white combination that graced the Jets' uniforms for the past 20 years, replaced by what the team calls "Gotham Green" and "Spotlight White." There's also a "Stealth Black" alternate uniform, along with a refreshed logo on all-green helmets.

"We wanted to create something that we think today's fans and traditional fans will like, and something that the players will like," team president Neil Glat told The Associated Press in a telephone interview. "And we also kind of were looking for that gritty, resilient New York City-area look. So, you're trying to accomplish a lot of different things."

It's a risky but potentially rewarding proposition with a thorough creative process — including lots of behind-the-scenes meetings, seemingly endless tweaks and plenty of opinions — that NFL teams, as well as franchises in other professional leagues, have attempted to varying degrees of success.

"The main reason teams do it is because fan interest has waned and you're looking to do a restart," said Marc Ganis, president of Sportscorp, a Chicago-based consulting firm, and an adviser to several team owners. "You're looking to re-energize or restart the marketing and branding of the team."

Just ask the NHL's New York Islanders, whose "fisherman" logo replaced the traditional "NY" circular design before the 1995-96 season — but was absolutely despised by fans and was gone by the end of that season.

In the NFL, teams can't pivot so quickly. They have to stick with their rebranded designs for five years before they can approach the league about changing uniforms and logos again.

"The reason we do that is to kind of help the consistency of the brand from a fan's point of view," said Chris Stackhouse, the NFL's art director. "It gives every change that we make enough longevity to really see if it sticks and make sure it works. So when our clubs approach us, they know that when they're making a change, it's a big deal and they're going to be locked into it for five years."

Jacksonville found out the hard way in 2013, when it redesigned its uniforms and included helmets that featured a two-tone finish. The new look was never fully embraced by Jaguars fans and was widely mocked. So, last year, the team unveiled an updated "no-nonsense" look that was much better received.

Merchandise revenue in the NFL is, by and large, divided equally among all 32 teams. So, franchises that make changes aren't necessarily doing it for money grabs to get new items online and on the shelves in retail marketplaces in hopes of direct financial gains.

For the Jets, there was plenty of hype leading up to their first major uniform and logo changes since 1998. That included team CEO Christopher Johnson teasing the announcement during the NFL owners meetings in Phoenix last month by saying he thought the new uniforms were "bad-ass."

There was rampant speculation on social media during the last several months with fan-crafted uniform mock-ups causing many to wonder if they were anywhere close to what would ultimately end up on the field.

"This is the first time the Jets are changing their brand and their how they communicate to fans in really a generation," said James Carmichael, the NFL's brand director. "So, it was really important to get this right. So you don't want to rush that. You want to make sure you're doing your due diligence exploring all your options to truly make sure that it fits who they are and who they want to be as a brand."

The process for the Jets began in 2014, when owner Woody Johnson and brother Christopher kicked around the idea of refreshing the look of the franchise. That jumpstarted several conversations between the team, Nike and the NFL, which surveyed management, employees and fans.

"Doing that diligence really kind of brings all the important pieces to the surface," Stackhouse said, "and helps my team really know how to kind of find that North Star creatively going forward."

When considering redesigning merchandise and apparel, teams typically have to measure the delicate balance between maintaining their traditions while having an eye toward the future.

"We know that fans of these teams, their colors or logos, this stuff is on shirts and apparel that are handed down from father to son from generation to generation," Stackhouse said. "These things mean a lot to people and we're changing that. So we take it very seriously, but we have to take as much of a long view on this as we can."

There was some early internal discussion in the Jets organization about making an extensive change to the team logo. Instead, the team decided on a refresh rather than an overhaul.

The uniforms, though, were set for a complete rebranding — from the style to the color. That process included a trip to downtown Manhattan for Stackhouse and his team to sift through bolts of fabrics after not quite getting into the end zone with the right shade of green.

"We needed to refresh the process and think differently," Stackhouse said. "And sure enough, we brought back one and as soon as we rolled it out on the table, we, on our end, kind of looked at it and had a strong feeling that we knew it when we saw it. And when we brought it to Mr. Johnson and the rest of the ownership there, they felt the same way."

Once a team gets the color nailed down and the logo is in development, Nike takes on an even bigger role by designing uniforms based on the concepts that have been collected.

Next comes the tweaks. And, lots of them.

Until, eventually, a team has its new look.

And, for the Jets, it comes at a time when change has swept through the franchise. There's a new coach in Adam Gase , a free-agent prize in running back Le'Veon Bell and a promising quarterback heading into his second NFL season in Sam Darnold.

And, they'll all be sporting a new look this season.

Winning or losing, however, will make for the ultimate fashion critic.