Jets S Maye out for season with torn Achilles tendon 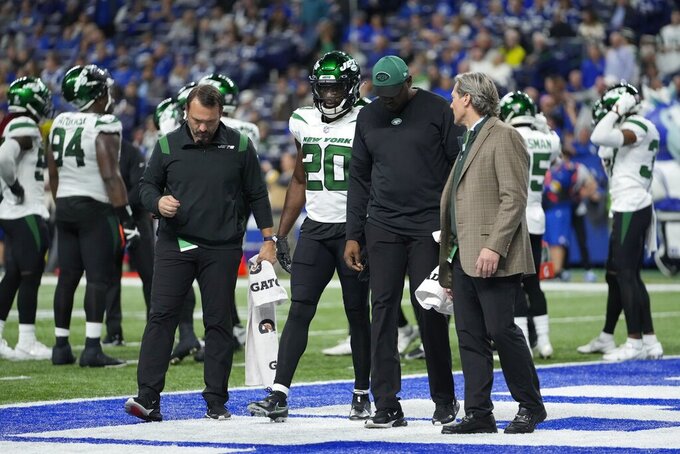 New York Jets' Marcus Maye (20) is helped off the field during the second half of an NFL football game against the Indianapolis Colts, Thursday, Nov. 4, 2021, in Indianapolis. Maye will miss the rest of the season with a torn Achilles tendon. Tests confirmed the severity of the injury, which coach Robert Saleh announced Friday. (AP Photo/AJ Mast)

Maye was injured early in the third quarter of the Jets' 45-30 loss at Indianapolis on Thursday night on a non-contact play. Tests confirmed the severity of the injury, which coach Robert Saleh announced Friday.

“Leaning on my faith,” Maye tweeted shortly after the game. “Y’all just pray for me and wish the best for me! I love my teammates more than y’all know! Hold it down! I’ll be alright, God got me!”

The 28-year-old safety took a few steps back in the secondary before pushing off to move forward on Jonathan Taylor's 2-yard run. He immediately went down to the turf and grabbed at the back of his right leg.

“It's heartbreaking,” defensive coordinator Jeff Ulbrich said. “He's the communicator back there. He's the general.”

The Jets got some positive injury news on quarterback Mike White, who left the game in the first quarter with a right forearm injury. Saleh said a bruised nerve that caused White to feel numbness in fingers on his throwing hand felt better by the end of the game, and it’s looking promising for him to practice next week.

White was starting his second straight game in place of rookie Zach Wilson, who Saleh said also is on track to practice next week. The coach said the team will see how the quarterbacks feel and practice before determining who will start against Buffalo on Nov. 14.

Tight end Tyler Kroft is being placed on injured reserve with a chest injury suffered at Indianapolis.

Maye's injury could mark the end of his tenure with the Jets. He's playing this season on the franchise tag after he and the team failed to reach an agreement on a long-term deal in the offseason. He could become a free agent after this season, but will now also have to deal with rehabilitating the Achilles tendon.

Maye remained with the Jets after the NFL's trade deadline Tuesday after receiving interest from some teams as a possible option in a deal. New York could again opt to use the franchise tag again on Maye, who was a second-round pick out of Florida in 2017 and is the team's longest-tenured player.

“For Marcus, I’ve seen this story unfortunately one too many times in this league,” Saleh said. “It’s never good initially. It sucks. But the one thing with Marcus is he is a young man, he’s got a tremendous mindset and he’s made of grit. His ride’s not over, his story’s not over.”

Maye is also dealing with some legal issues, stemming from his DUI arrest in Florida in February that the team was only recently made aware of after an ESPN report. He could face a suspension from the NFL, which is reviewing the case under its personal conduct policy, and discipline from the Jets for not informing them of the incident.

“I definitely feel sorry for it,” Maye said two weeks ago. "You know, I learned from it, owned everything. Just got to keep going.”

The Jets are in a tough spot at safety with Maye out and Lamarcus Joyner previously lost for the season with a torn triceps. Second-year safety Ashtyn Davis has been starting in Joyner's absence the past few games, with Sharrod Neasman and Jarrod Wilson also on the roster.