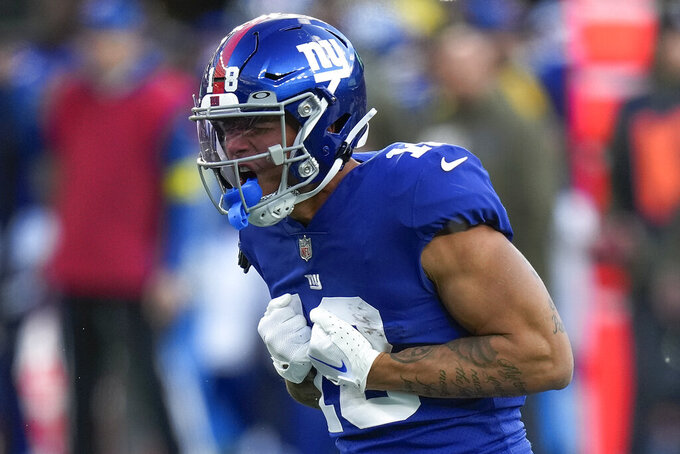 EAST RUTHERFORD, N.J. (AP) — The New York Giants have been finding ways to win all season and they came up with a new one against the Houston Texans.

Barkley carried a career-high 35 times for 152 yards and scored a touchdown as the surprising Giants returned from their bye week and beat the Houston Texans 24-16 on Sunday.

“I think he loves those opportunities," said quarterback Daniel Jones, who threw two touchdown passes to help the Giants improve to 7-2. “He loves the opportunity to take over a game and play as well as he did.”

The Giants seemed to come into the game planning to run against the NFL's lowest-ranked run defense. Jones handed the ball off 42 times and carried another five times himself as New York gained 191 yards rushing.

“We wanted to get him going and get our line going and try to win the line of scrimmage,” Giants coach Brian Daboll said. “And Daniel had a, what, 153 (passer) rating? Is that right? So, he was efficient.”

Barkley, who had contract talks with the Giants during the bye week without reaching a new deal, downplayed the number of carries, adding he was feeling fine after the game.

Jones, who was 13 of 17 for 197 yards, hit tight end Lawrence Cager on a 9-yard TD pass and Darius Slayton on a 54-yard catch and run as the Giants tallied on their opening possession of each half in building a 14-3 lead.

The Giants defense preserved the win, forcing two red-zone turnovers in the fourth quarter. Linebacker Jaylon Smith recovered Dameon Pierce's fumble at the 11-yard line and Dane Belton intercepted Davis Mills' pass in the end zone, one play after Houston lost a TD pass to Brandin Cooks because of a holding call.

“Obviously, the frustration is there,” Mills said. “No one likes losing, especially me. That’s probably the worst feeling I can ever imagine, is losing something when you’re putting in all the hours to go out there and win games and it’s just not happening.”

Fairbairn's last field goal cut the lead to eight points with 7 seconds to play but Adoree Jackson recovered the onside kick to seal the win.

Pierce ran for 94 yards and had two catches for 28 yards for the Texans.

Texans coach Lovie Smith said the game was a microcosm of the season. Houston didn't capitalize on its chances, turned the ball over too much and gave up big plays.

“We realize what the problem is and what the results say a little bit, but we are close,” Smith said. “Eventually I do feel like we’re going to get over the hump. So far, we just finished the first half of the season but we still can see promise for the second half.”

Cager was elevated from the practice squad for the game and the TD catch was the first of his brief four-game career, three with the Jets. He also recovered an onside kick after Fairbairn's second field goal. ... Texans TE Jordan Akins had three catches for 72 yards. ... Slayton finised with three catches for 95 yards.

Giants: Belton had a chest X-ray but he did not seem concerned.

Texans: Return home to play the Commanders on Sunday.