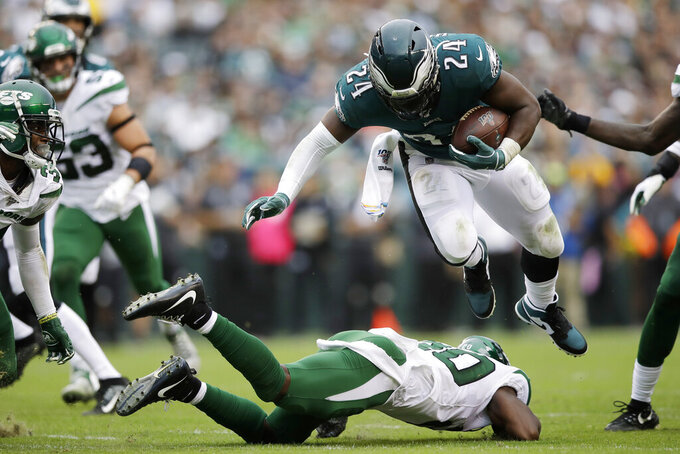 PHILADELPHIA (AP) — Jordan Howard does everything quietly except when he has the ball.

The soft-spoken running back keeps going forward, doesn't shy away from contact and will even dish it out. He's a punishing runner with a knack for reaching the end zone.

Howard leads the Philadelphia Eagles (3-2) with 248 yards rushing, an average of 4.7 yards per carry and five touchdowns (four rushing, one receiving). He has split time with rookie Miles Sanders, but is earning a featured role.

"He's kind of the guy that you kind of settle down in the run game and give him those touches," Eagles coach Doug Pederson said. "He's a between-the-tackles guy. He's big and powerful. He has good vision. And I really think Miles is learning from Jordan running the ball, which is a positive. I think as we go, Jordan has been the lead back the last couple of games for sure. But Miles is learning and coming, and we are really happy with both of them."

Howard has been a team player since his arrival in Philadelphia, following a trade with Chicago.

"I'm comfortable with whatever role they give me," he said. "Any running back likes to get touches to get in a rhythm but me and Miles work hand-in-hand along with Darren (Sproles) and when Corey (Clement) gets his opportunity, he'll take advantage as well. So I just look forward to it."

Howard had 3,370 yards rushing and 24 touchdowns in three seasons with the Bears. A fifth-round pick in 2016, he went to the Pro Bowl as a rookie. But he lost some touches to Tarik Cohen in 2017-18 and was traded to the Eagles for a conditional sixth-round pick in March.

"I pretty much knew what was happening," Howard said. "I just didn't know where I was going. Coming to a winning team pumped me up. My first two years, I didn't win. I was enjoying winning last year and I was glad to be coming to another team that had success in the previous year, so I was really excited about it."

Sanders, a second-round pick, had an impressive preseason, but is averaging only 3.6 yards per carry. Sanders has been more effective as a receiver, catching 10 passes for 133 yards, including three long gains. He's also solid in pass protection.

"Our relationship has been great," Howard said. "I know he's young and hungry and ready to prove himself. I remember being like that my rookie year. He's a smart kid and he's picked up on a lot of things very fast. We also have a great coach, Duce Staley, so he keeps him up to speed as well."

Howard, who turns 25 on Nov. 2, is in the final year of his rookie contract. He could earn a lucrative deal if he puts up big numbers. But the Eagles like to spread the ball around, mix up their backs and their offense is centered around Carson Wentz's throwing arm.

Howard is fine with that.

"Just having a lot of options, a lot of talent, as many guys that touch the ball, it'll make it that much harder to stop us, so I'm all for it," he said.

The Eagles relied on Howard and Sanders in a win at Green Bay on Sept. 26. The duo combined for 159 of the team's 176 yards rushing. Running the ball effectively could be a formula for success with three straight road games coming up, starting this week at Minnesota (3-2).

It's Howard's time to shine.

"You can just tell he's an experienced runner," offensive coordinator Mike Groh said. "He's obviously really strong with the ball in his hands. He's decisive. He has good vision. He shows the ability to stick his foot in the ground and then he pushes the pile. He's generally falling forward for additional yards, rarely knocked back. He's a strong runner. He brings that tenacity to our offense."