Julian Love to be wild card in Martindale's Giants defense 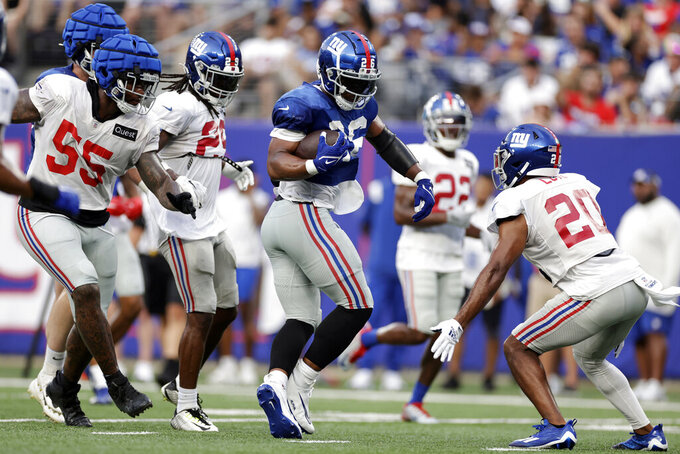 EAST RUTHERFORD, N.J. (AP) — Julian Love had a busy offseason and the New York Giants safety will probably have an even busier football season.

Instead of picking out flowers, cakes, honeymoon sites for his wedding to his high school sweetheart and now wife, Julia, Love is getting ready to be the wild card in Wink Martindale's attack-from-all-angles defense.

Love, who has moved into the starting lineup with the release of Logan Ryan, is excited about his new role. In addition to being a safety, the four-year veteran from Notre Dame has played in the box, in the slot, blitzed and done all sorts of things meant to confuse the opposition.

“He’s pacing us right now,” Love said of Martindale's aggressive approach. “He wants to show what we want to show in the preseason and we’re going to get to that eventually. But yeah, he has a plan and some are going to be more exotic.”

Some of the Patriots complained the Giants defense did a little too much in a 23-21 victory over New England in the preseason opener on Thursday.

Love felt what the Giants did was very standard, even the blitzes. He expects more of the same Sunday in the preseason game at home against the Cincinnati Bengals.

Martindale, who was hired as the defensive coordinator by Brian Daboll earlier this year, likes Love's versatility.

“I mean those guys you can move around are fun to coach because the No. 1 thing is how smart he is — how football smart he is,” said Martindale, who was the Ravens coordinator in his final four seasons in Baltimore. “He understands little things and it’s a valuable piece to have when you’re putting a defense together in this league.”

A fourth-round draft pick, Love has played in 48 of 49 games in his three NFL seasons with 16 starts. The only game he missed was because he was inactive for the third game of his rookie season.

Love made five starts last season, but he still finished eighth on the team with 66 tackles, 10 on special teams.

“I’ve had a lot going on this offseason, but during it all, I've just been putting perspective on what I want for myself in this upcoming year,” Love said. “Everybody knows I’m a pretty selfless guy. I try to do whatever I can to help a team improve, but now I’m excited just to have the opportunity to take my game to the next level.”

One thing that has been obvious at practice the past few days is the defense is getting the better of quarterback Daniel Jones and the offense.

There has been some chirping about it, too.

“We’re going to be tripping a little bit just hoping for a response, but it’s just the nature of competition with them,” Love said.

If there is any area the Giants seemingly need help in it's at cornerback. The safeties are set with Love and Xavier McKinney starting and Andrew Adams backing them up.

Adoree Jackson has been solid at the right cornerback spot but second-year pro Aaron Robinson, who was given the left side after James Bradberry was released in a salary cap move, struggled against New England.

There were two plays in a row where a receiver ran right past him. Some of the other cornerbacks struggled defending balls thrown to a receiver's back shoulder.

Players who might challenge Robinson are veteran Darnay Holmes and youngsters Cor'Dale Flott (third-round pick), Darren Evans and Zyon Gilbert. Second-year pro Rodarius Williams has been limited in camp by an injury.

“We got some guys and this next game and then the next one, you want to see guys take that next step,” Love said. “I feel like coaches might feel a certain way, but I’m like, it’s their first game. let them ease into it.”