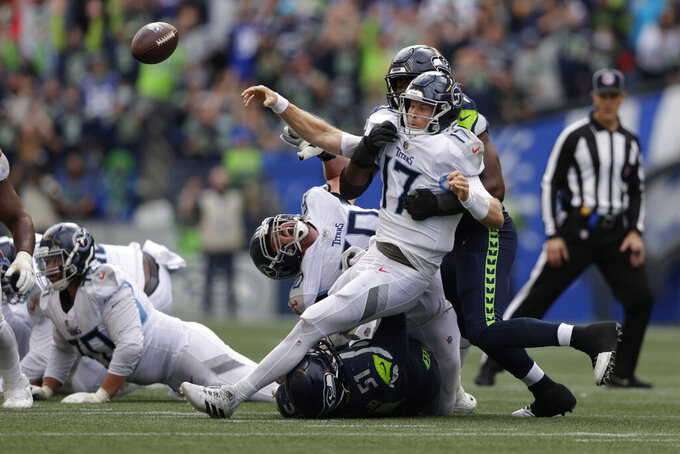 Tennessee Titans quarterback Ryan Tannehill (17) gets off an incomplete pass as he is tackled by Seattle Seahawks defensive end Rasheem Green, right, during the second half of an NFL football game, Sunday, Sept. 19, 2021, in Seattle. (AP Photo/John Froschauer)

The Titans leaned on their All-Pro star and staged the kind comeback they haven't pulled off in a regular-season game in more than a decade.

“I don’t think anyone expected us to come here and get a ‘W,’” Henry said. “I knew if we stuck together, trust in what we preach and what coach preaches, play the way we practice, it would eventually come together for us.”

Henry ran for 182 yards and two fourth-quarter touchdowns, Randy Bullock hit a 36-yard field goal midway through overtime, and the Titans rallied from a 14-point deficit to stun the Seattle Seahawks 33-30 on Sunday.

“It just never ceases to amaze me. We just got to keep being in opportunities and being in football games where he can help us affect the outcome,” Titans coach Mike Vrabel said. “That’s really what happened today.”

Down 24-9 at halftime and 30-16 early in the fourth quarter, the Titans leaned on their All-Pro running back, who carried them on the day Seattle welcomed fans back for a regular-season game for the first time since the end of the 2019 season.

They left in silence, thanks to Henry, a terrific fourth-quarter drive from Ryan Tannehill and Seattle’s missed opportunities.

Seattle led by 14 after Freddie Swain busted free from coverage for a 68-yard touchdown with 13:06 left. But Jason Myers missed the extra point, hitting the upright and setting the stage for a wild conclusion.

Henry rumbled 60 yards for his second touchdown of the game less than a minute after Swain’s TD catch. His 1-yard run with 29 seconds left in regulation and the extra point from Bullock tied the game at 30.

And when Tennessee needed yards in overtime after nearly ending the game with a safety, Henry had four runs for 21 yards to set up Bullock’s winning kick.

Most important, the Titans avoided an 0-2 start.

“I don’t get caught up in all the scenarios and records,” Henry said.

Russell Wilson was splendid for three-plus quarters, but struggled in the closing minutes of regulation and overtime when Seattle had chances to put the game away.

Wilson was 22 of 31 for 343 yards and two touchdowns, including a 63-yard strike to Tyler Lockett in the first half. Chris Carson added a pair of short TD runs.

It was the fourth time in franchise history Seattle lost when leading by at least 15 points at halftime and first since losing to the St. Louis Rams 33-27 in overtime in 2004 at home.

“We see what we can do in the first half, we know what we’re capable of,” said Lockett, who had eight catches for 178 yards. “We’ve just got to be able to learn how to be able to play when we’re on top.”

It was a disastrous fourth quarter for Seattle and overtime wasn’t much better. Tennessee nearly won the game when Ola Adeniyi sacked Wilson on Seattle’s only overtime possession. It appeared to be a safety, but Wilson was ruled down at the 1. The resulting short field led to an easy winning drive for the Titans.

“Happy for him that he can get recognized and help his football team win,” Vrabel said.

Seattle’s first home regular-season game with fans since Week 17 of the 2019 season was a giant party from the pregame concert with hometown hip-hop artist Macklemore to the roar after Lockett’s long touchdown reception that left the stadium swaying.

But the atmosphere turned tense in the fourth quarter and downright sour as fans headed for the exits.

Tannehill was 7 for 7 on the final drive of regulation, six of the seven passes going to running backs. The Titans faced just one third down and on first-and-goal, Henry plunged in from the 1.

Tennessee finished with 532 total yards, including 345 in the second half and overtime.

Henry also became the 18th player in league history with at least 10 games of 150 yards rushing. The Titans are 10-0 in those games.

“He got rolling, and when he gets rolling, he’s dangerous,” Seattle's Jamal Adams said.

The Titans' offensive line took a big blow two hours before kickoff when left tackle Taylor Lewan limped off the field with a knee injury suffered in early pregame warmups. Ty Sambrailo started in Lewan’s place, the same role he took on last year after Lewan was lost to a season-ending knee injury in October.

The injury woes up front persisted for Tennessee as left guard Rodger Saffold III went down with a shoulder injury briefly in the first half, returned, then left for good in the third quarter.

Seahawks: At Minnesota on Sunday.