Kirk Cousins was an old-school quarterback in Vikings opener 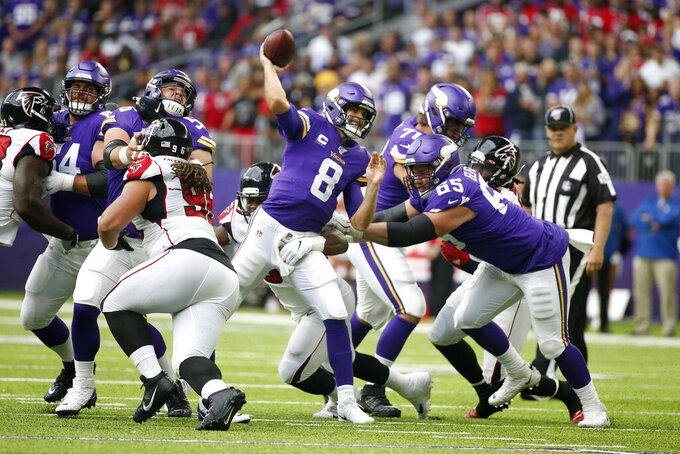 Minnesota Vikings quarterback Kirk Cousins throws a pass during the first half of an NFL football game against the Atlanta Falcons, Sunday, Sept. 8, 2019, in Minneapolis. (AP Photo/Bruce Kluckhohn)

Kirk Cousins went back to his Pop Warner days.

Cousins only threw 10 passes in Minnesota's 28-12 win over Atlanta in Week 1. He completed eight for 98 yards and one touchdown as the Vikings dominated the game on the ground.

The attempts, completions and yards were career-lows for Cousins in games he started. It was the fewest attempts by a Vikings quarterback in a regular-season win since 1977.

"Throwing 10 times is really unique," Cousins said. "Probably haven't had a game with that few attempts since literally Pop Warner. I have no problem with being conservative. As long as we win the football game, that's all that matters to me."

Here's a look inside more numbers going into Week 2:

PERFECT PASSERS: Ravens quarterback Lamar Jackson and Cowboys quarterback Dak Prescott each posted a 158.3 passer rating last week, becoming the first players with a perfect rating in a season opener. The 22-year-old Jackson became the youngest player to do it. Jackson threw for 324 yards and five TDs in a 59-10 win over Miami. Prescott had 405 yards passing and four TDs in a 35-17 victory over the Giants.

FAST START: Baltimore scored the most points (42) by any team in the first half of a season-opening game in league history. The Ravens also became the first team since Oakland in 1967-68 to open consecutive seasons with 40-point games.

BACKUP EFFICIENCY: Jaguars rookie quarterback Gardner Minshew replaced Nick Foles and completed 88 percent of his pass attempts (22 of 25). It was the highest completion percentage for a rookie in his debut, minimum 15 attempts. Minshew completed his first 13 pass attempts.

TIE MATTERS: The Cardinals and Lions played to a 27-27 tie, the third time a season opener ended without a winner. The Steelers and Browns started the season with a tie last year.

CLIMBING THE CHARTS: Arizona's Larry Fitzgerald made his 117th career TD catch, passing Antonio Gates for sixth on the all-time list. Marvin Harrison is fifth with 128.

MOVE OVER, ED: Le'Veon Bell became the fastest player to reach 8,000 scrimmage yards in league history, surpassing Eric Dickerson by doing it in his 63rd game.

D-JACK MAGIC: Eagles receiver DeSean Jackson had 154 yards receiving, including a pair of a 50-plus yard TDs. He has 31 TDs of at least 50 yards, trailing only Jerry Rice (36) on the all-time list.

DUAL THREAT: Panthers running back Christian McCaffrey ran for 129 yards and had 10 receptions against the Rams. He's the first player in the last 54 years with multiple games in his career with at least 120 yards rushing and 10 catches.