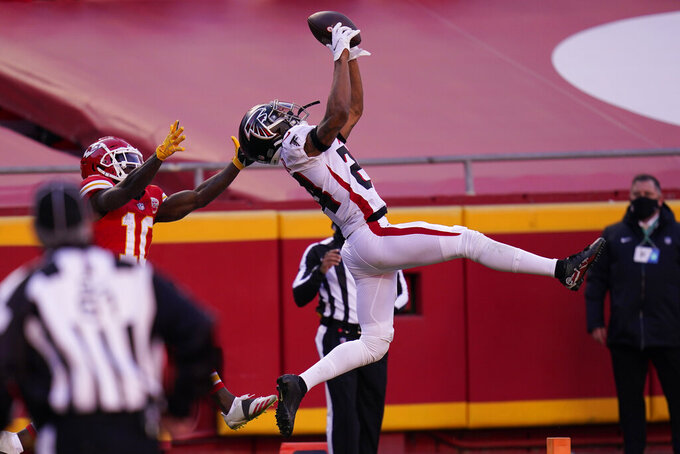 Sunday’s 17-14 defeat at Kansas City ended with an unlikely source of frustration. Younghoe Koo, who had missed just once this season and had made 27 consecutive field goals, sliced a 39-yard attempt that would have sent the game to overtime.

The Falcons earlier this year became the first team in history to blow two 15-point leads in the fourth quarter — they did so in consecutive weeks against Dallas and Chicago — and in their most recent game allowed Tampa Bay's Tom Brady to make a stirring comeback similar to his historic rally for New England past Atlanta in Super Bowl 51.

Losing to the Chiefs dropped Atlanta to 4-11, but the team has been on the wrong end of lopsided games just three times. The other eight were decided by an average of 3.5 points.

“The biggest takeaway is we can play with anybody,” interim coach Raheem Morris said. “You can line them up and have a chance to go get after them. And these guys certainly can show that. We certainly have been able to do it most of the year, but we haven’t been able to win these games that come down to the wire.”

Staying competitive, however, isn’t likely to help Morris much whenever he interviews for the job vacated by the firing of Dan Quinn after a 0-5 start. The Falcons have now lost four straight under Morris.

The Falcons also are in the market for a new general manager after Thomas Dimitroff was fired simultaneously with Quinn.

The missed kick wasn't the only play that could have turned things in Atlanta's favor. Cornerback A.J. Terrell nearly had an interception in the right corner of the end zone, and the Chiefs took the lead on the next play.

“I just went up for the ball and came down with it,” Terrell said. “The ground just bobbled it loose. I wish I could have it back, but it just is what it is.”

The pass rush generated no sacks for the first time in the last 10 games, though the Falcons did a good job of moving Patrick Mahomes, who was hit five times, off his spot. Grady Jarrett had the only tackle for a loss.

The Falcons began the game having allowed 62 explosive plays, third-most in the league. Credit coordinator Jeff Ulbrich’s scheme with holding Kansas City’s NFL-leading offense to four plays of 20 yards or more. One of them was a 25-yard touchdown pass, but the defense played well enough to give Atlanta a chance to win, holding the Chiefs under 20 points for the first time since Week 5 of last season.

It’s probably not fair to compare Matt Hennessy in his first career start at center to the man he replaced, six-time Pro Bowl selection Alex Mack, but Hennessy struggled. He committed three penalties and was overmatched at times against Chris Jones and Kansas City’s stout defensive line.

4 — The Falcons' current position in next year's draft.

Get ready for the season finale at Tampa Bay on Sunday.