Kyler Murray ahead of Cardinals veterans with the playbook 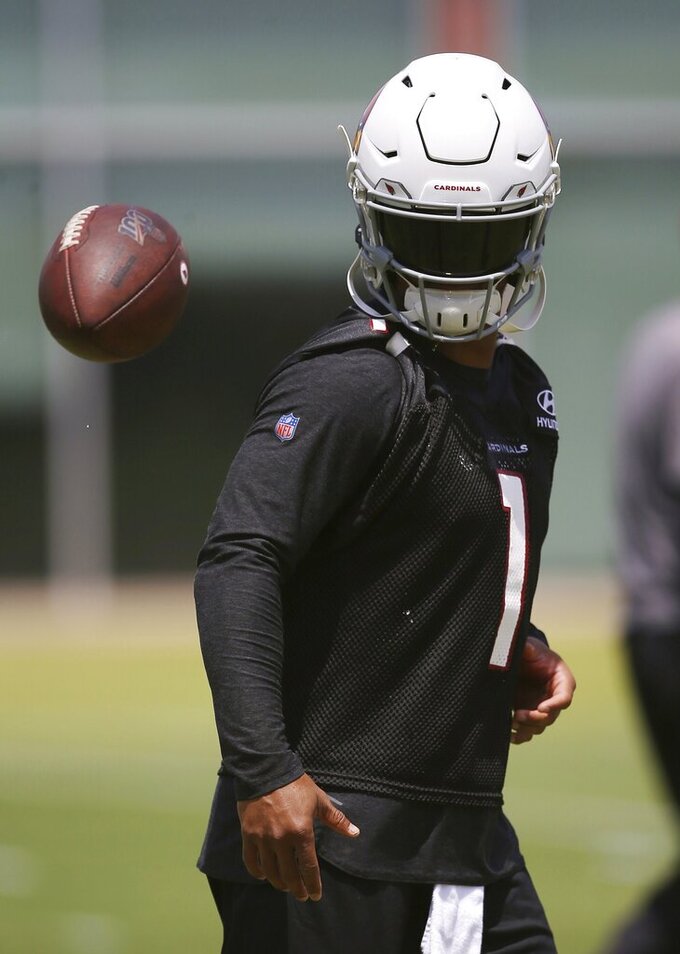 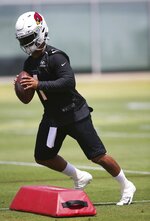 TEMPE, Ariz. (AP) — Everything has been new for Kyler Murray since the NFL draft. He's had to adjust to new teammates and coaches, being in a professional atmosphere, facing the demands of being an NFL player.

But as the Cardinals opened their first mandatory minicamp Tuesday, Murray had an advantage in one area: the playbook.

First-year Arizona coach Kliff Kingsbury has brought in an entirely new offensive system that's unfamiliar to the Cardinals veterans but that Murray knows, at least to a certain degree, after playing at Oklahoma.

Just last week, Arizona receiver Larry Fitzgerald, entering his 16th NFL season, acknowledged Murray is ahead of most veterans in terms of the playbook.

"Obviously, I'm more familiar with it; coach Kingsbury knows it the best," Murray said after the first practice of minicamp. "With him (Fitzgerald) being a veteran, not having to come to the OTAs and me being there every day, studying it every day, yes I do know it better. But that's my job."

Kingsbury had one of college football's highest-scoring offenses during his six seasons with Texas Tech and twice produced the nation's passing leader.

Kingsbury was hired to replace Steve Wilks in part because of that offense and set out to get a quarterback who knows it and can run it.

The Cardinals moved up four spots to No. 10 overall in last year's draft to take Josh Rosen, seemingly settling the quarterback spot for at least the near future.

When Murray bypassed a professional baseball career to play football, Arizona and Kingsbury couldn't pass on taking him this year with the No. 1 overall pick.

Though small for an NFL quarterback at 5-foot-10, Murray had an explosive lone season as Oklahoma's starting quarterback, accounting for 5,300 yards and 54 touchdowns on his way to winning the Heisman Trophy.

Murray played in a similar wide-open offense to what Kingsbury ran in Lubbock and the Cardinals are hoping he can pick it up quickly to do some of the same things he did in college as an NFL quarterback.

"There's probably some truth to it, having been in a similar system all those years," Kingsbury said of Murray knowing the playbook better than the veterans. "(Receiver) Christian Kirk has a good feel for it as well. Some of the terminology and concepts are really similar to what they've done before."

Even so, knowing the playbook and executing it are two different things.

Murray dominated as a college quarterback, yet the jump to the NFL is a big one. The players are bigger, faster, smarter, so there's a feeling-out process for any rookie player, particularly a quarterback.

"The windows are a lot tighter, guys are a lot smarter," Murray said. "They know what you're going to do before you even do it; you say hut, they already know what you're looking for. It's mind games, but it's fun, a lot of competition — everything I thought it would be."

Murray has impressed the Cardinals through rookie camp and offseason workouts, showcasing his rare ability to make plays with his arm and his legs.

These lower-key workouts without pads have given him a chance to experiment, take chances here and there, see what he can and can't do against NFL players.

A bigger test will come when the Cardinals get to training camp and the preseason, when they're in pads and the intensity ratchets up.

"I like his attitude because he's going to take chances and this is the time to do it, see what you can get away with," Kingsbury said. "If you want to go after Pat (All-Pro cornerback Patrick Peterson) a couple times, it's usually all it takes to learn. He's aggressive in nature, the way he thinks, the way he attacks the football field, and I like that."

Murray has a head start with the playbook. They key will be using it to his advantage as the season gets closer.