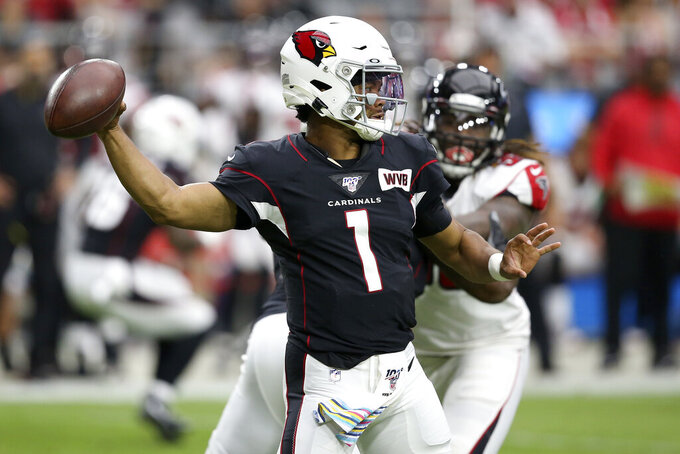 The Latest on the NFL's Week 6 (all times EDT):

The NFL is down to just a pair of winless teams with the New York Jets and Washington Redskins finally getting their first victories of the season.

Washington won the battle of winless teams by edging Miami 17-16 with the Redskins smothering a 2-point conversion by the Dolphins inside the final minute.

The Jets got Sam Darnold back at quarterback, and they held off Dallas 26-24 to give coach Adam Gase his first victory with New York.

That leaves Cincinnati 0-6 under rookie head coach Zac Taylor and the Dolphins at 0-5. Miami hosts Cincinnati on Dec. 22.

Tennessee quarterback Marcus Mariota has been replaced by backup Ryan Tannehill late in the third quarter with the offense struggling.

With Mariota running the show, the Titans managed just six first downs and 88 total yards trailing Denver 13-0. Mariota's numbers into the third quarter: 7 of 18 for 63 yards passing. Mariota also was intercepted twice for his first turnovers of the season. Denver sacked Mariota three times after he was sacked 22 times through the first five games.

Tannehill was acquired by the Titans in a trade with Miami in March to back up Mariota, the No. 2 pick overall in the 2015 draft.

Broncos receiver Emmanuel Sanders has been ruled out for the second half against Tennessee with a knee injury.

Sanders had one catch for no yards in the first half.

The 32-year-old Sanders has 24 receptions for 298 yards and two touchdowns this season in his comeback from left Achilles tendon surgery and an operation on his right ankle.

Dallas kicker Brett Maher has tied his own franchise record by kicking a 62-yard field goal — with plenty of room to spare — as the first half ended cutting the Cowboys' deficit against the New York Jets to 21-6.

It was also the longest field goal ever made against the Jets.

Maher also booted a 62-yarder against the Eagles last December.

Broncos kicker Brandon McManus broke a streak of seven straight misses from 50 or more yards when he connected from 53 late in the first half against Tennessee.

He also made a 31-yarder in this low-scoring affair.

The Broncos were out of sorts on special teams most of the first half. They had to call timeout before a Tennessee punt in the first quarter because they had only 10 players on the field.

Then, right before McManus' 53-yard attempt, they had to call another one with the play clock to avoid a delay of game penalty.

Two high-flying offenses have made big mistakes in the first half of a defensive struggle between the Los Angeles Rams and the San Francisco 49ers.

San Francisco and Los Angeles are tied 7-7 at halftime after both teams committed turnovers at their opponents' 1.

Jimmy Garoppolo threw a terrible interception to Marcus Peters to kill a strong drive by San Francisco. The Rams then got stopped for no gain on two running plays from the Niners 1.

San Francisco is struggling to establish a running game without both of its starting offensive tackles, while the Rams have just 27 yards passing even though they're missing star running back Todd Gurley.

Kyler Murray and the Arizona Cardinals are flying through Atlanta's defense.

Murray has hit 16 of 19 passes for 240 yards and a touchdown, helping the Cardinals build a 20-10 halftime lead over the Falcons.

Zane Gonzalez kicked his second field goal, from 22 yards, in the final seconds of the half.

Dallas Cowboys wide receiver Amari Cooper is questionable to return against the New York Jets with a quadriceps injury.

Cooper left the game late in the first quarter and was on the sideline without his helmet early in the second quarter. He had one catch for 3 yards.

The Cowboys' leading receiver was limited at practice last week with ankle and quad ailments. Cooper was coming off a career-high 226 yards receiving against Green Bay. He has 33 receptions for 515 yards and five touchdowns this season.

Richard Sherman made sure nobody would question his pregame handshake etiquette this week.

The San Francisco 49ers cornerback gave humorously exaggerated handshakes to the Los Angeles Rams' captains during the coin toss before their meeting at the Coliseum.

Sherman claimed last week that Browns quarterback Baker Mayfield didn't shake his hand before the game, even though he did. Sherman used the imagined slight as motivation in the 49ers' Monday night victory.

Injuries are mounting for the Texans in their game against Kansas City.

Right tackle Tytus Howard was carted off the field on the opening possession of the second half with a knee injury. A few plays later, cornerback Bradley Roby left with a hamstring injury.

Texans linebacker Zach Cunningham left in the first half with a knee injury.

Meanwhile, the Texans' Ka'imi Fairbairn has missed a field goal, and Kansas City has answered with Tyreek Hill's second TD catch of the game, giving the Chiefs a 24-23 lead late in the third quarter.

The Texans lead the Chiefs 23-17 at halftime of a punt-free foul-fest in Kansas City.

The teams have combined for 14 penalties for 114 yards, the most fouls in any half of any NFL game this season. That doesn't include another six penalties that were offsetting, overruled or declined.

Deshaun Watson has touchdowns throwing and rushing for the Texans, who closed the first half by scoring 20 unanswered points. They punctuated it with a strip-sack of Chiefs quarterback Patrick Mahomes with 23 seconds remaining that set them up for Watson's short TD run.

The Minnesota Vikings have used two long touchdown passes by Kirk Cousins to Stefon Diggs to take a 24-10 halftime lead on the Philadelphia Eagles.

Diggs scored on plays covering 51 and 62 yards, becoming the first Vikings player since Randy Moss in 2000 to post two touchdown receptions of 50-plus yards in one game. Cousins has three touchdown passes and 209 yards at the break.

In three home games this year, the Vikings have outscored their opponents in the first half by a combined score of 66-17,

The Denver Broncos are honoring their two latest Hall of Fame inductees at halftime of the game against the Titans.

Hall of Fame president David Baker will present the Hall of Fame rings to Champ Bailey and family members of the late Pat Bowlen.

Also, Bailey is being inducted as the 33rd member of the Broncos' Ring of Fame.

He becomes the first Bronco inducted into the Pro Football Hall of Fame and the team's Ring of Fame the same year.

The NFL wanted to make kickers work harder to make extra points, and it's working. Three extra points already have been missed by halftime for a total of 24 missed PATs for the season.

That's a new high through six weeks since the NFL moved the spot for extra points back. The previous high was 22 last year and also in 2016.

Two extra points were missed in Cleveland with Seahawks kicker Jason Myers missing the extra point after Russell Wilson ran for a 16-yard TD for Seattle in the first quarter, then Browns rookie Austin Seibert missed the extra point in the opening seconds of the second quarter leaving Cleveland's lead at 20-6.

Ka'imi Fairbairn of the Texans missed the third extra point and his fourth this season after a touchdown pass by Deshaun Watson, leaving Houston trailing Kansas City 17-9. Fairbairn missed only two extra points all last season when he led the NFL in scoring.

Bengals cornerback Dre Kirkpatrick has been taken off the field on a cart after hurting his left knee late in the first quarter against the Baltimore Ravens.

Kirkpatrick was injured while making a sideline tackle on tight end Mark Andrews. Kirkpatrick came into the game ranked sixth on the team in tackles and with one of Cincy's six sacks. His return is questionable.

Hill had been sidelined with a broken clavicle sustained against the Jaguars.

The Chiefs were penalized four times on their opening drive, which started at their 9-yard line. So by the end of the drive, Patrick Mahomes already had thrown for 116 yards and the touchdown.

The early games have started off with a burst. Literally.

Brandon Wilson took the opening kickoff in Baltimore 92 yards for a touchdown, giving Cincinnati a 7-0 lead over the Ravens. Wilson and the Bengals made Baltimore pay for a rare kickoff that Justin Tucker didn't put out of the end zone.

That's the first opening kick returned for a touchdown in the NFL in two years. Pharoh Wilson did it with a 103-yard return in a Rams' win over the Jaguars in Week 6 in 2017.

In Cleveland, Dontrell Hilliard didn't reach the end zone on Seattle's opening kickoff. But Hilliard went 74 yards down to the Seahawks 23, and Nick Chubb scored three plays later with the Browns taking advantage of the big return.

The New Orleans Saints got an unexpected — and probably unintentional — backer for their game at Jacksonville.

Pope Francis, the head of the Catholic Church, included the Saints' Twitter logo in a tweet Sunday morning — one New Orleans football fans took as a good omen for their team.

"Today we give thanks to the Lord for our new #Saints. They walked by faith and now we invoke their intercession," the Pope tweeted after canonizing five new saints at a mass at Vatican City.

The hashtag and capitalization of Saints added the Fleur de Lis, the emblem associated with the Saints and worn on the team's helmets.

People certainly noticed as one person wrote, "Who Dat, father?" At least one Saints player took the tweet as a good sign: "Wow, are we blessed or what?!??"

Carolina's Joey Slye missed a 60-yard attempt on a rare free kick for a field goal at the end of the first half against Tampa Bay.

Slye got his opportunity after the Panthers called for a fair catch at midfield with 1 second left in the half. Tampa Bay had false-started three straight times before the punt.

The Panthers chose the option of a free kick. That allowed Slye to kick from the 50 with the Bucs players forced to remain 10 yards back. The kick went wide right and Carolina's lead remained 17-7 at the break.

The Panthers used a franchise-record tying six first-half sacks, three takeaways and two Christian McCaffrey touchdowns to take a 17-7 halftime lead in London against the Bucs.

The Carolina Panthers have taken a 10-0 lead over the Tampa Bay Buccaneers thanks to a short drive and a long one.

Carolina's James Bradberry intercepted Jameis Winston on the first play from scrimmage. The Panthers lost 2 yards before settling for a 49-yard field goal from Joey Slye.

Carolina then drove 99 yards for a touchdown after Bradley Pinion's punt was down at the 1. Kyle Allen went 5-for-5 for 68 yards on the drive and Christian McCaffrey capped it with a 1-yard run on fourth down.

That was just the second 99-yard drive for Carolina in the past 12 seasons. The Panthers had one last year against Baltimore.