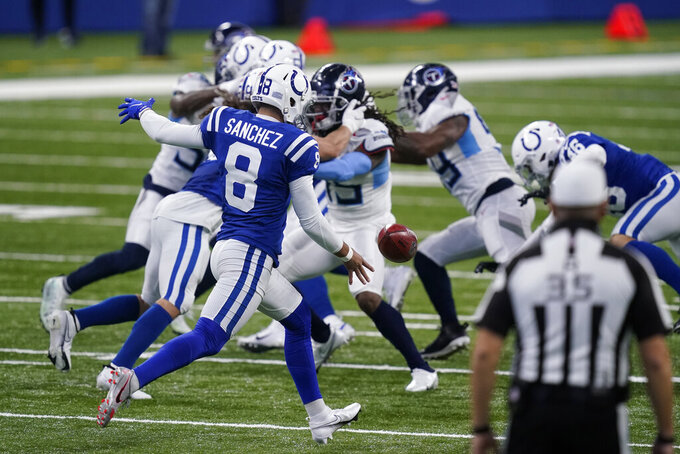 The ejection came after an incomplete pass on second-and-9 from the Saints 26. The personal foul gave Kansas City a down and Le'Veon bell scored on a pitch from Mahomes. The Chiefs added a two-point conversion to make it 29-15.

Larry Fitzgerald caught his first touchdown pass of the season to help the Cardinals take a 26-20 over the Eagles at halftime in Arizona.

The 36-year-old Fitzgerald has 12 touchdowns in 10 career games against Philadelphia. The receiver has caught a pass in 255 straight games, which is the second-longest streak in NFL history behind Jerry Rice (274).

Fitzgerald’s 14-yard catch from Kyler Murray pushed the Cardinals ahead 26-14 late in the second quarter. The Eagles responded with a 5-yard pass from Jalen Hurts to Greg Ward to pull within 26-20.

New Orleans quarterback Drew Brees needed more than a full quarter to complete a pass or lead the Saints to a first down.

Once he did, he started looking a little more like his old, record-setting self, and it led to a touchdown.

Brees, playing for the first time in five weeks because of fractured ribs and a punctured lung, started 0 for 6 with an interception that set up the Kansas City Chiefs' first touchdown.

Brees finally completed a short pass to running back Alvin Kamara for New Orleans’ first first down of the game about three minutes into the second quarter.

A few plays later, he hit Emmanuel Sanders 51 yards down the right sideline. That made him 2-for-10 passing through five possessions, but it was good enough to cut the Chiefs’ lead to 14-7 after Taysom Hill powered in from 1 yard out.

The winless New York Jets are 30 minutes away from ending their 0-13 slide.

The Jets lead the Los Angeles Rams 13-3 at halftime, with their defense putting on an impressive display against Jared Goff and the Rams’ inconsistent offense.

New York scored on its opening drive for the eighth consecutive game with a 74-yard march ending in Ty Johnson’s 18-yard TD catch. The Jets then added two field goals after a blocked punt and an interception by Bryce Hall.

The Jets are hoping to avoid the third 0-16 season in NFL history, although a win also would endanger their chances at the No. 1 draft pick.

The Rams haven’t been sharp on offense for most of the season despite their winning ways, and Sean McVay’s group has fallen apart at SoFi Stadium. The Rams managed just 63 yards on their first six drives before a quick march in the final 57 seconds to a 45-yard field goal by Matt Gay at the gun.

Drew Brees’ comeback from rib fractures and a punctured lung that sidelined him four games is off to a shaky start.

The New Orleans Saints’ record-setting quarterback was intercepted on his fourth pass after his first three fell incomplete. He was 0 for 5 through three series and the Saints didn't have a first down.

The interception by L’Jarius Sneed gave Kansas City the ball on the New Orleans 36-yard line. It was just BRees’ fourth interception this season and the Chiefs capitalized, driving for a touchdown on Tyreek Hill’s 5-yard touchdown catch to make it 7-0 in the first quarter.

New Orleans also has just two QBs available, the other being Taysom Hill, who went 3-1 as a starter during Brees’ absence.

New Orleans’ other reserve QB, Jameis Winston, was placed on the club’s COVID-19 reserve list on Sunday morning. The designation applies to players who either tested positive for COVID-19 or were known to be in close contact with an infected person.

The Chiefs went up 14-0 on the first play of the second quarter.

Detroit kicker Matt Prater has tied the NFL record for most field goals of 50 yards or longer.

Prater made a 53-yard field goal with 4:09 left in the third quarter Sunday to pull Detroit within 24-18 of the Tennessee Titans. That gave Prater the 58th field goal of his career of 50 yards or longer, tying the mark first set by Sebastian Janikowski for the most in NFL history.

With his 70th catch, Jefferson topped the mark set in 1998 by Pro Football Hall of Famer Randy Moss.

Jefferson has five receptions for 83 yards for the Vikings, who trail the Chicago Bears 27-20 in the third quarter. The first-round draft pick from LSU has 1,162 receiving yards to lead all NFL rookies this year. Moss holds the franchise rookie record in that category with 1,313 yards.

The Tampa Bay Buccaneers have lost Carlton Davis to a groin injury.

Davis, who leads Tampa Bay with four interceptions, was ruled out for the rest of the game against the Atlanta Falcons early in the second half.

Romeo Okwara snapped a 75-game drought for the Detroit Lions along with getting them some points.

Okwara sacked Titans quarterback Ryan Tannehill in the end zone with 3:31 left in the second quarter. With the sack, Okwara had his career-high eighth this season. It also was Detroit’s first safety in 75 games, coincidentally also against Tennessee on Sept. 18, 2016. That pulled Detroit within 21-9 of the Titans.

The Lions also converted the ensuing kick into points as D’Andre Swift scored on a 2-yard touchdown run. But Matt Prater’s extra point was wide left.

The Titans capped the first half with a 38-yard field goal by Stephen Gostkowski for a 24-15 lead.

New England Patriots cornerback Stephon Gilmore has left the game at Miami in the second quarter with a right leg injury. He was hurt trying to change direction covering a receiver and was helped to the locker room.

Gilmore was the NFL Defensive Player of the Year in 2019.

The Patriots lead the Dolphins 6-0 at halftime.

Dez Bryant has scored his first touchdown since December 2017, catching an 11-yard pass from Lamar Jackson for the Baltimore Ravens against the Jacksonville Jaguars.

Bryant made the catch on the left side of the end zone late in the first half. It was his first reception of the game and first score since facing the New York Giants for Dallas on December 10, 2017.

Bryant missed the 2018 season and last year before signing with Baltimore this season as a free agent. The 32-year-old returned this week after a two-week stay on the reserve/COVID-19 list.

When Rodrigo Blankenship made his second extra point Sunday, he broke a Colts’ rookie record that stood for 50 years.

His 37 extra points this season are one more than Jim O’Brien in 1970. O’Brien capped that season by making the winning field goal with 9 seconds left to give the Colts the first of their two Super Bowl titles.

Dallas long snapper L.P. Ladouceur has set an NFL record for regular-season games by a Canadian-born player, appearing in his 251st game on a first-quarter punt against San Francisco.

The 39-year-old Montreal native broke kicker Eddie Murray’s record of 250 games from 1980-2000. Ladouceuer joined the Cowboys for the fourth game of the 2005 season and has played every game since then. The 2014 Pro Bowler also has been in nine playoff games.

Ladouceur was one of the three team captains for the game against the 49ers and the only one to go to midfield for the pregame coin toss. He shares the Dallas club record of 16 seasons with tight end Jason Witten. If he completes this season, Ladouceur will be one game shy of Witten’s franchise high of 255 games. His 251 consecutive games are already a club record.

According to the Cowboys, Ladouceur has a perfect record on what is now 2,238 snaps after the successful punt against the Niners. The breakdown is 1,054 punts, 512 field goals and 672 PATs.

Canadian Prime Minister Justin Trudeau issued a letter of congratulations to Ladouceur this past week.

Derrick Henry has run himself into another piece of NFL history with his latest touchdown.

The reigning NFL rushing leader capped the Tennessee Titans’ opening drive with a 3-yard TD run against the Detroit Lions. That’s his 15th of the season, and he came into the game with 1,532 yards rushing. He now is the fourth player in NFL history to run for at least 1,500 yards and 15 TDs in consecutive seasons.

The Jacksonville Jaguars have turned to placekicker Aldrick Rosas to handle their punting duties in place of Logan Cooke.

Cooke is out with an illness, so Rosas was called upon to make the free kick after a Baltimore safety in the first quarter. Rosas kicked the ball a respectable 53 yards, but that was without pressure.

Cooke is also the holder, so it’s unclear who will fill in at that spot for the Jaguars.

Jason Myers tied Seattle’s franchise record with his 30th consecutive made field goal that put the Seahawks up 3-0 on Washington midway through the first quarter. Myers is 19 of 19 this season and tied Olindo Mare’s franchise mark.

Washington went three and out on its opening drive with Dwayne Haskins back as the starting quarterback and is the only team left in the NFL that hasn’t scored on its first possession.

Colts punter Rigoberto Sanchez is active and is expected to play against Houston less than three weeks after having a cancerous tumor removed.

Sanchez has chosen to keep the location of the tumor private. It is unclear whether Sanchez will only punt — as he did two days before having surgery — or whether he will also kick off and serve as the holder on extra points and punts as he usually does.

Sanchez first became concerned when he felt something wasn’t right as he warmed up for kickoffs during practice Nov. 25. The team’s medical staff advised him to have an MRI, which revealed the tumor. Sanchez opted to play that week and punted five times in a loss to Tennessee. He made the announcement Nov. 30 and had surgery the next day.