The Latest: Texas A&M to have reduced capacity for football 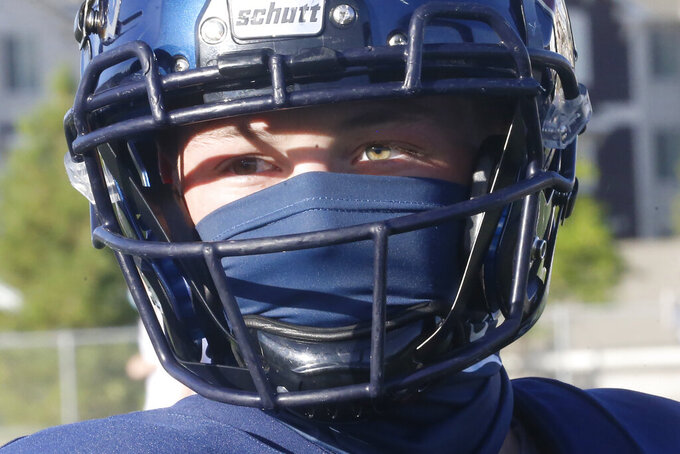 A Herriman player wear a mask during a high school football against Davis on Thursday, Aug. 13, 2020, in Herriman, Utah. Utah is among the states going forward with high school football this fall despite concerns about the ongoing COVID-19 pandemic that led other states and many college football conferences to postpone games in hopes of instead playing in the spring. (AP Photo/Rick Bowmer)

The university's plan focuses on the recommended health protocols and ensures that attendance during the season will comply with Texas Gov. Greg Abbott’s executive order limiting the normal operating capacity for outdoor sporting venues.

The exact capacity percentage will be determined based on the number of season ticket holders and student sport pass holders who choose to attend.

The football season is scheduled to begin Sept. 26. Initial anticipated attendance to begin the season is approximately 30% of normal stadium operating capacity, but that's subject to change based on state health developments. Kyle Field's capacity is 102,733.

Notre Dame has canceled in-person undergraduate classes for two weeks after a spike of coronavirus cases since the semester began last week.

University president the Rev. John Jenkins says he decided against sending students home after consulting with health care experts. Instead, the university is imposing restrictions on student activity, including limiting access to dormitories to residents and barring students from major gathering places on campus.

Jenkins said there have been 147 confirmed cases of coronavirus on campus since the start of classes and called it “very serious” in an address to students and staff.

Football coach Brian Kelly says the team is testing every week and players have to wear masks, practice social distancing, and avoid large gatherings. Kelly says if players want to play they have to maintain that discipline.

Alabama will allow about 20% capacity for games at Bryant-Denny Stadium this season.

The university released its plans for dealing with COVID-19 at games, noting seating will be set up to allow social distancing.

The Crimson Tide opens its home schedule against Texas A&M on Oct. 3. Southeastern Conference teams are scheduled to play only 10 league games starting on Sept. 26.

Alabama will have mobile-only ticketing and parking to allow for contactless entry for all venues.

All Ohio high school sports can go forward this fall, with an option for sports like football or soccer to be delayed until the spring if schools wish, Gov. Mike DeWine said Tuesday.

The governor’s order takes effect Friday and prohibits spectators at events other than family members or individuals close to athletes, with final decisions on those people left up to schools.

It will be up to schools to police the limits on attendance at sporting events.

Orgeron said during a video conference Tuesday that the team had “two or three guys that are out” because of positive tests. He did not specify which players had tested positive.

“We’re ahead (of) most programs,” Orgeron said. “Our players feel comfortable that they’re getting proper care.”

The New England Patriots will be playing without fans in Gillette Stadium at least through September.

Stadium officials said in a statement on Tuesday that the state will not allow fans at any event next month. That includes the Patriots’ games on Sept. 13 against the Miami Dolphins and the one two weeks later against the Raiders.

While saying that they “fully support” the state’s position, stadium officials also said they “would have welcomed the opportunity to host fans in August and September, but are hopeful to do so later in the season.”

The Patriots had previously announced a plan that would have limited Gillette Stadium to about 20% of its 66,000 person capacity. Officials said they worked with experts to develop a plan to reopen at partial capacity and “are confident in our ability to provide a safe and comfortable environment for fans.”

According to the Massachusetts reopening plan, sporting events with fans will not be allowed until the state reaches Phase 4, which requires a vaccine or treatment for COVID-19.

The Chiefs will allow up to 2,000 season ticket holders to attend training camp on Saturday, making them the first NFL team to allow fans since the coronavirus pandemic dramatically altered the way teams are preparing for the season.

The team also said that up to 5,000 season ticket holders will be allowed at practice on Aug. 29, when the franchise plans to raise a new Super Bowl championship flag over the west end zone.

The Chiefs typically draw thousands of fans daily to training camp on the campus of Missouri Western State University, about an hour’s drive north of Kansas City in St. Joseph, Missouri. But the pandemic caused the Chiefs and the few other teams that still leave home for training camp to instead hold all their workouts at team facilities.

North Carolina coach Mack Brown said he remains “confident” that the Tar Heels will play football this season after the school shut down in-person undergraduate classes.

Brown said Tuesday that the school’s move to online courses after recent coronavirus clusters in student housing and a fraternity could ultimately help “create a better seal around our program and a better bubble.”

Brown said team staffers hosted a Zoom call for parents on Monday to address questions. Athletes can choose to remain in current residences, while some football players have previously chosen to opt out of the upcoming season.

Brown said many players were already taking online courses and that the team will continue once-weekly testing of players for the coronavirus.

He said the team is trying to “make sure our players and our staff understand that we’ve got three months here where we cannot go outside for social reasons or to eat or anything else if we want to have our football season.”

The Southeastern Conference will prohibit “suite hopping” as part of COVID-19 guidelines designed for fan safety and health in preparation for conference-only play this season.

Decisions on whether fans can attend games will be made closer to Sept. 26 when the league begins play. Attendance numbers will be left to member schools but must follow state and local guidelines. Centers for Disease Control and Prevention recommendations should be followed in the absence of those measures.

Furniture in premium seating and clubs shall be arranged to promote physical distancing, the guidelines add. Physical distancing and face coverings will also be stressed there as well as in public areas, including concessions, where barriers must be installed. The SEC guidelines also suggest “grab and go” food options, with drinks provided directly to spectators and single-serve condiments offered.

SEC Commissioner Greg Sankey said its 14 schools adopted the fan guidelines as a baseline and added, “They provide conference-wide expectations for protection of guests who are able to attend our games.”

The Tennessee Titans won't have fans at their home opener on Sept. 20 against Jacksonville because of the coronavirus pandemic.

Burke Nihill, the Titans’ president and CEO, says they wish they could open in front of fans as a franchise coming off its first AFC championship game in 17 years. But he says the Titans support the mayor and the local health department’s decision to keep Nissan Stadium closed to fans at least to start the season.

The Titans play only one home game in September. Team officials have been working with public health experts to design a stadium plan in the hopes that fans will be able to attend some of the eight scheduled home games this season. Those precautions include mandatory masks, socially distant seating, contactless faucets and hand sanitizer stations throughout the stadium.

Nashville's MLS team has three games scheduled through Sept. 12 at Nissan Stadium. Nashville SC set a record for the largest soccer crowd in Tennessee with its MLS debut on Feb. 29 as fans packed Nissan Stadium.

One person who isn't a player returned a positive result for COVID-19 out of 1,400 tests administered in the controlled environment set up for the U.S. Open and another tennis tournament preceding it at the same site in New York.

The U.S. Tennis Association said Tuesday that the person is asymptomatic and must isolate for at least 10 days.

Contact tracing has started to see who might have been exposed to that person and should quarantine for two weeks.

The Western & Southern Open, moved this year from Cincinnati to New York because of the coronavirus pandemic, begins Saturday. The U.S. Open starts Aug. 31.

South Africa has withdrawn from a planned women’s cricket tour of England because of coronavirus-related restrictions.

The England and Wales Cricket Board and Cricket South Africa say “this decision was taken due to the current international travel regulations in place for South African national teams.”

South Africa had been scheduled to travel next month and play using the same bubble-style protocol used for men’s tours of England by West Indies, Ireland and Pakistan.

The ECB says it is in “multiple discussions” to host international women’s cricket tours.

It’s the third women’s series to be canceled this year for South Africa following a planned series against Australia in South Africa and a tour of the West Indies.

Two players from Roma’s youth team have tested positive for the coronavirus.

The Italian soccer club has not named the players but says they are asymptomatic and have begun self-isolating.

Roma says “those who have come into contact with the two individuals have been traced and notified” and adds that “a deep clean and disinfection of the club’s training facilities has also already begun.”

The two players, their teammates and the youth team staff will undergo further tests.

The team’s training activities have been suspended until at least Aug. 24.

German soccer club Union Berlin wants to hold a pre-season friendly match with 3,000 spectators and is hoping that “preventative” coronavirus tests for fans will allow it to happen.

The Bundesliga club says it has applied to the local Treptow-Köpenick health authorities for permission to hold the game with an altered hygiene plan on Sept. 5.

Union says “a preventative test for all spectators is intended to replace the currently valid social distancing rules.”

German soccer clubs previously outlined plans to resume games with some socially distanced fans attending in seated areas. Union’s Stadion An der Alten Försterei has mostly standing terraces so it could have far fewer fans attending than its competitors.