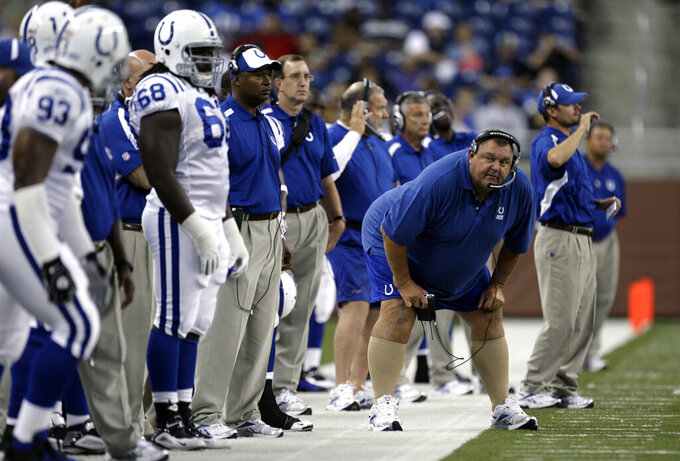 WAITING FOR VERIFICATION- DO NOT MOVE - FILE In this Aug. 29, 2009, file photo, Indianapolis Colts defensive line coach John Teerlinck, front right, looks on during the first quarter of a exhibition NFL football game against the Detroit Lions in Detroit. Longtime NFL assistant coach Teerlinck has died. He was 69. Colts owner Jim Irsay made the announcement in a Twitter post Sunday, May 10, 2020. (AP Photo/Paul Sancya, File)

Indianapolis Colts owner Jim Irsay announced Sunday on Twitter that Teerlinck, who spent nearly a quarter-century creating mayhem for NFL quarterbacks, had died. The Colts confirmed it was from Irsay's account. Teerlinck was 69.

His prized pupils routinely showed everyone what they learned.

The late Chris Doleman, John Randle and Kevin Greene went on to have Hall of Fame careers. Four more players — Al “Bubba” Baker, Neil Smith, Robert Mathis and Dwight Freeney — all finished their careers with at least 100 sacks. Thirty-one players made the Pro Bowl and at his final stop, Indianapolis, Teerlinck put together one of the most dynamic pass-rushing combinations in recent memory with Mathis and Freeney.

And yet, Teerlinck never served as a defensive coordinator or head coach in the league.

But those who knew Teerlinck understood without his imposing presence, booming voice and demanding tackling dummy drills, they would not have become household names.

“He was an innovator and his teachings were way ahead of his time," Freeney said in a statement released by the Colts. “He taught me so much and I definitely would not have had the career I had if it wasn't for him. I will miss him. Rest in peace my friend, the greatest d-line coach of all-time."

The real genius of Teerlinck was his ability to adapt his style to whomever he worked with.

When he took over as Minnesota's defensive line coach, under defensive coordinator Tony Dungy in 1992, he inherited a proven pass-rushing demon in the late Chris Doleman and an emerging one in the previously undrafted Randle. Doleman recorded 27 sacks over the next two seasons and Randle made his first two Pro Bowl appearances under Teerlinck's tutelage.

In 1995, Teerlinck left for Detroit where he took promising defensive end Robert Porcher and turned him into a three-time Pro Bowler. Porcher finished his career with 95 1/2 sacks.

“He was a great tactician, who taught me a lot, including telling me Brett Favre was going to get the snap when he opened his hands under center,” Porcher recalled. “He also had a big personality and a big body.”

After surviving a controversy in Detroit over allegedly teaching his players to tackle quarterbacks low, Teerlinck landed in Denver. There, he helped the Broncos finish in the league's top 10 for sacks in 1997 and 1998 — both Super Bowl-winnning seasons.

In 2002, he left the Broncos to reunite with Dungy in Indy, where he won a third Super Bowl ring following the 2006 season with the help of Mathis and Freeney. His career ended after the 2011 season.

Teerlinck's influence didn't just show up on the stat sheetm, either.

At least eight former players including Greene and Mathis went to become coaches. So did one of his five children, Bill.

After the younger Teerlinck landed the defensive line job at Virginia Tech in January, he called his father his hero and told reporters the only job he ever wanted was to coach.

“RIP to THE GREATEST Passrush Coach OF ALL TIME!!!! #JohnTeerlinck," Mathis wrote on Twitter. “The man that taught the great Rod Marinelli and all believers of REAL PASSRUSH."

Teerlinck was a fifth-round draft pick of San Diego in 1974 and went on to play 20 games with the Chargers before he suffered a career-ending knee injury.

He spent six seasons coaching teams before taking his first pro job under the late George Allen with the USFL's Chicago Blitz. Chicago produced the top-rated defense in each of the league's three seasons. He joined the Arizona Outlaws in 1986 before making his NFL debut with the Cleveland Browns in 1989. Teerlinck moved to the Los Angeles Rams in 1991.