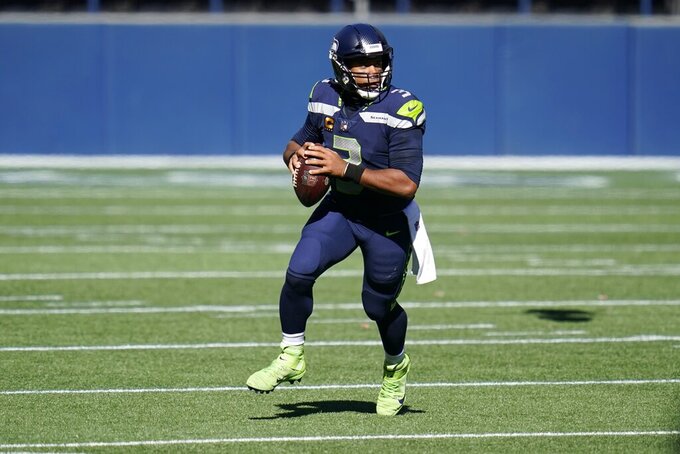 FILE - In this Sunday, Sept. 27, 2020, file photo, Seattle Seahawks quarterback Russell Wilson looks to pass against the Dallas Cowboys during the first half of an NFL football game in Seattle. Wilson leads the NFL with 14 touchdown passes. The Seahawks play the Miami Dolphins on Sunday, Oct. 4. (AP Photo/Elaine Thompson, File)

One of the NFL’s premier matchups of the early schedule has been postponed due to players testing positive for the coronavirus. Patriots starting quarterback Cam Newton and Chiefs practice squad quarterback Jordan Ta’amu were both placed on the COVID-19 reserve list Saturday.

The game will be played Monday or Tuesday, the league said.

It is the second game postponed this weekend: Pittsburgh at Tennessee was moved to Week 7 after an outbreak of the coronavirus with the Titans.

With the way the Chiefs toyed with the Ravens in prime time in a matchup of the two best teams in the AFC — and possibly the entire NFL — it's hardly surprising that Kansas City is being anointed months before the Super Bowl.

Oh yes, the defending champions look unstoppable on offense and vastly improved on defense. Their confidence level has soared higher than the upper stands at Arrowhead Stadium. Stands, by the way, that will have fans in the seats when the Patriots (2-1) pay a visit.

“We understand that you get people’s best shot,” Chiefs coach Andy Reid says. “When you play the Patriots, you’re always going to get their best shot. That’s how we’re looking at it and we have looked at it throughout the weeks here.”

The Chiefs (3-0) have won a franchise-record 12 straight games. They beat the Patriots at New England 23-16 last December as part of that streak.

New England has displayed a strong running game and is likely to try that approach to keep Patrick Mahomes and cohorts off the field.

The action began Thursday night with Denver's 37-28 road victory over the New York Jets. Melvin Gordon sealed the Broncos’ first victory with a 43-yard touchdown run with 1:48 left, and the defense made just enough plays in the fourth quarter to beat the winless Jets.

Should the Bills win — a long shot considering the history of this original AFL rivalry — they would invoke some positive history.

The Bills are 1-11 in their past 12 road games against the Raiders, with the only win in the past 54 seasons coming in 1991 in Los Angeles. But Buffalo is seeking back-to-back 4-0 starts for the third time in franchise history. The Bills did it in 1991 and 1992 on the way to AFC titles, and in 1964-65 when they won AFL championships.

Some Raiders history, carrying over from Oakland and LA, of course: They seek their fifth 3-1 record in the past 25 seasons. They made the playoffs the previous four times and missed them every other season.

OK, OK. Everyone in America seems to know that Russell Wilson is the best NFL quarterback to not receive an MVP vote in his career. His numbers so far are very MVP-like, of course.

Wilson is the first player to have at least four touchdown passes in each of his first three games in a season. He leads the league with 14, the most after three games in NFL history. Wilson has 24 games with a passer rating of at least 130, the most in the league since 2012.

And now he faces a porous Miami secondary. The Dolphins are allowing 8.8 yards per pass, worst in the NFL.

“He causes a lot of issues,” Dolphins coach Brian Flores says of Wilson. “Most guys scramble to run. Some guys scramble to throw. He’s really a true dual-threat who can extend plays and create big plays or stand in the pocket and fire throws down the field. So it’s a big challenge and he’s a great player. I can’t say enough good things about him.”

Who Dat going to beat the Saints? Well, the Raiders and Packers the past two weeks while New Orleans was minus 2019 Offensive Player of the Year Michael Thomas (ankle). The star receiver, probably the NFL's most valuable performer who is not a quarterback, hopes to be back against the Lions.

The Saints have lost consecutive games for the first time in three years. The most recent time they lost three in a row was when starting 0-3 in 2016.

The Lions ended an 11-game slide with their upset victory at Arizona.

Rookie Justin Herbert is the third quarterback in NFL history to throw for 300 yards in his first two games. But if Tyrod Taylor is recovered from a medical mishap, he could start.

Bucs WR Mike Evans has four TD receptions, one of three players with a TD catch in each of the first three games. But Tampa Bay's other top wideout, Chris Godwin, is hobbled with a hamstring issue.

That should be a ticked-off group of Ravens traveling down I-95 to take on their “neighbors.” Kansas City exposed the Baltimore offense when it falls out of Lamar Jackson's comfort zone, though the Ravens did show some spunk in the second half in the loss.

Their defense is not likely to be stressed by Washington, which also needs to rekindle the pass rush that lifted it to an opening victory against Philadelphia before two losses.

The Ravens have won seven consecutive on the road since a defeat at Kansas City in September 2019, the longest current streak in the NFL. Baltimore averaged 34 points in those seven games and scored five defensive TDs.

Each team comes off unexpected results. The Panthers went out to LA and beat the Chargers handily. The Cardinals, one of the league's most impressive starters in 2020, fell to the previously winless Lions. The Panthers have won four straight games against the Cardinals and 11 of the past 14.

If the Nick Foles era is beginning in Chicago, well, we know he is capable of doing big things, as he proved in 2017 with the Eagles. The Bears finally tired of Mitchell Trubisky's inconsistency, and Foles brought them back to beat Atlanta.

“I feel really comfortable,” Foles says. “And I think that going in this week, there have been a lot of great conversations. Even last game, I felt more of myself when I stepped into that situation just playing and getting to just do things that I like to do in a chaotic situation.”

The Colts' opponents have been the Jaguars (1-2, beating Indy), Vikings and Jets (both winless entering this week). This is their first real test.

Traveling cross country seeking a first victory isn't the best route, and the Giants were only surpassed by their MetLife Stadium compadres, the Jets, for inept performances through three weeks. They are banged-up everywhere.

The Rams flew back from Buffalo believing they should be 3-0, though they tried to shrug off some officiating gaffes that might have cost them late against the Bills. Their offense is in high gear, and New York has trouble covering everybody.

Could two teams look more opposite? The Falcons have blown big leads the past two weeks in dramatic fashion, putting an already under-fire coaching staff even closer to the flames. Atlanta's defense has been a sieve and its offense has disappeared in fourth quarters.

As for the Packers, well, they went 13-3 last season and look even better right now. Even without his only reliable wideout, Davante Adams, Aaron Rodgers easily handled the Saints in New Orleans.

“Other than Davante ... I don’t think many teams look at us and think we have a number of stars that they’re really worried about," A-Rod says. "Obviously (running back) Aaron Jones is a such a talented guy and you try and take him away, but you never know really whose day it’s going to be.”

We never know which Browns or Cowboys team will show up each game. Cleveland was awful in its opener against Baltimore, then beat up on Cincinnati and Washington. That means the Browns lost to a good opponent and defeated two tail-enders.

Which of those the Cowboys might be is undetermined. They were handed their only victory by hapless Atlanta, and the two road losses were at the Rams and Seahawks. Again, quality opposition.

New Browns coach Kevin Stefanski seems to have had more effect on his club than Cowboys new man Mike McCarthy has so far in Big D.

Here's the scary part for banged-up Philadelphia: The easier portion of the early schedule just concluded.

At least the Eagles, who need Carson Wentz to settle down and protect the ball and for his line and receivers to step up, get an undermanned 49ers.

“We’re coaching like we’re playing against Carson Wentz who is one of the better quarterbacks in this league. He was the best player in the league the year they won the Super Bowl,” 49ers coach Kyle Shanahan says.

No team has been hit harder by injuries, missing a half-dozen key starters. But Niners 2019 All-Pro tight end George Kittle should return.

The fact that Joe Burrow and his teammates were crushed by tying at Philadelphia says a lot about the new mindset in Cincinnati. The top overall draft pick has been solid so far, finding a favorite target in Tyler Boyd, who has 21 receptions.

After an opening upset win over Indianapolis and tight defeat at Tennessee, the Jags spit the bit at home against Miami. They got extra time after that Thursday night flop to mend — and to watch tape of how awful they were.

A pair of 2019 division winners with nothing to show this season. The Texans have fallen to the Chiefs, Ravens and Steelers, total record 8-1. Their defense has been unimpressive and they sorely miss WR DeAndre Hopkins, who is going wild in Arizona.

In come the Vikings, who played Tennessee last Sunday and thus had to make adjustments according to NFL/NFLPA protocols after the Titans had some positive coronavirus tests. Minnesota isn't getting much of a pass rush, a strength in previous years, but at least the offense woke up in the loss to Tennessee.