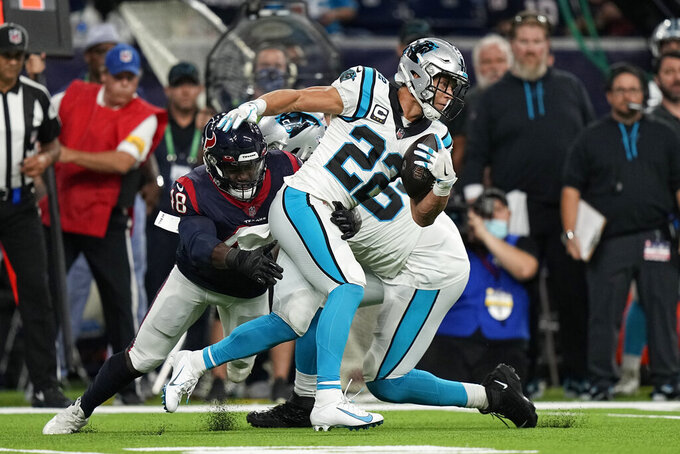 CHARLOTTE, N.C. (AP) — Panthers running back Christian McCaffrey returned to practice on a limited basis Wednesday after missing Carolina’s 36-28 loss to the Dallas Cowboys with a hamstring injury.

Coach Matt Rhule said McCaffrey had a “good practice,” but added that it’s too early in the week to know if McCaffrey would be fully recovered in time to play Sunday against the Philadelphia Eagles.

“Christian was limited today and I don’t know what that means in terms of where he will be on Sunday,” Rhule said. “That is probably something that will go up until game time and we will make the best decision for him and the team moving forward.”

The Panthers are 3-0 this season when McCaffrey plays.

The last thing the Panthers want to do is rush back their most versatile offensive player, but quarterback Sam Darnold said that decision is ultimately up to the 2019 All-Pro running back.

“It's tough for him because he's such a competitor and he wants to go out there and play," Darnold said. "At the same time it is early in the season. But if he feels like he can play, he will make a calculated decision. He is very smart and very savvy that way.”

The Panthers will be without starting linebacker Shaq Thompson, one of their top defenders, on Sunday. Thompson sustained a foot injury against Dallas. Rhule said there is a chance Thompson could return for next week's game against the Minnesota Vikings.

Also, starting left tackle Cam Erving did not practice because of a neck injury and his status for this week remains up in the air. Rookie Brady Christensen or Trent Scott would start Sunday if Erving can't play, Rhule said.