Miller bids final farewell to Broncos before heading to Rams 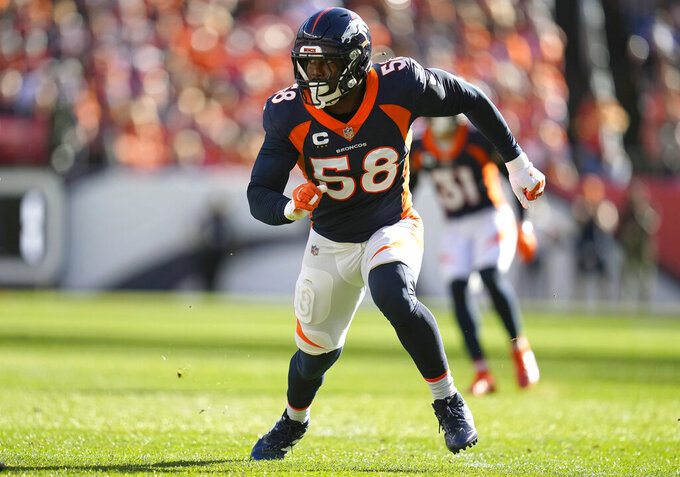 FILE - Denver Broncos outside linebacker Von Miller (58) plays against the Las Vegas Raiders during the first half of an NFL football game, Sunday, Oct. 17, 2021, in Denver. A person with knowledge of the deal tells The Associated Press, Monday, Nov. 1, 2021, that the Denver Broncos have agreed to trade star linebacker Von Miller to the Los Angeles Rams for a pair of 2022 draft picks. (AP Photo/Jack Dempsey, File) 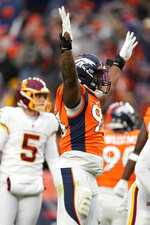 ENGLEWOOD, Colo. (AP) — The Broncos got a taste of life without Von Miller when the star linebacker was held out of Denver's scratch-and-claw 17-10 win over Washington.

The Broncos (4-4) managed five sacks and a pair of Justin Simmons end-zone interceptions as they snapped a four-game skid less than 24 hours before bidding their all-time sacks leader farewell.

Their first win since Sept. 26 left them at .500 heading into next weekend's game at Dallas.

“This team, they’re going to start winning soon,” Miller said as he headed to the Los Angeles Rams in exchange for a pair of second-day draft picks in 2022. "I wanted to be a part of it to fix it.”

Instead, Miller is joining forces with Aaron Donald in LA, where the Rams (7-1) are trying to join the Tampa Bay Buccaneers as the second straight team to win a Super Bowl in its home stadium.

Not that Miller was in any sort of rush to leave on a cold, overcast day in the Mile High City.

The Super Bowl 50 MVP may be on his way to the West Coast, but first he needed to say goodbye to the Rocky Mountains and the only organization he has ever known.

“It’s always tough whenever you leave,” Miller said Monday as he sat in the back seat of a Cadillac Escalade before making his way out of the team's complex. “It was an honor and a privilege to play here.”

Miller watched the Broncos turn in a stellar defensive performance on his behalf Sunday. They pressured Washington's Taylor Heinicke all afternoon.

What's more, Miller's proteges performed to rave reviews. Malik Reed had two sacks and Dre'Mont Jones recorded 1 1/2 more, along with a blocked field goal. Stephen Weatherly, who was acquired Oct. 23 from Minnesota, got in on the act with a sack. So did Shelby Harris, who had a half-sack and another blocked field goal — his second in two weeks.

“I had a lot of fun,” Harris said. “Just going out there and playing, getting back to your roots.”

The Broncos lost deep roots with Miller, who had seven 10-sack seasons since being picked No. 2 overall in 2011 out of Texas A&M. He was an eight-time Pro Bowler and seven-time All-Pro in Denver.

In exchange for Miller, the Broncos received 2022 second- and third-round picks from the Rams. They also are picking up $9 million of the $9.722 million left on his contract.

Now it's up to the likes of Kenny Young — just acquired from the Rams — rookie Baron Browning, Reed, Jones, Jonathon Cooper and Harris to help carry the load. Same with Miller's rushing partner, Bradley Chubb, once he returns from injured reserve.

“We really can do whatever we put our minds to,” Harris said Sunday after the win. "But it needs to be 11 collective minds for the same goal.”

Browning received a glowing performance evaluation as he stepped into the role of defensive signal caller. Browning finished with a team-high eight tackles.

“He was ready for the moment,” Reed said. “It wasn’t too big for him.”

The Broncos rushed for a total of only 83 yards on 21 carries. Melvin Gordon III did have the go-ahead score on a 7-yard run with 4:27 remaining. But he also had a critical third-down fumble that gave Washington the ball at Denver's 24 with 21 seconds remaining.

“That’s on me," said Gordon, who also had a touchdown catch. "I’ve been in the league long enough to know what to do. You get what you can, go down, punt the ball and seal the game. The defense had my back, though. Hats off to those guys.”

Simmons turned in his first multi-pick game of his career. Simmons now has 19 interceptions since entering the league in 2016.

Broncos offensive coordinator Pat Shurmur's play-calling continues to be baffling at times, especially on the last drive and with 37 seconds left. After a short run by Javonte Williams — who fumbled, but Denver recovered — Teddy Bridgewater threw an incompletion that stopped the clock. Then, Gordon fumbled the ball, giving it back to Washington for one last gasp.

Asked what happened, Fangio responded: "It was awful. It was a terrible, terrible series of downs for us.”

On Monday, he stepped back a bit and said the botched rollout by Bridgewater was on him, not Shurmur.

“The coaches thought it would be a good call and ran it through me — I approved it,” Fangio said.

He acknowledged he was tempted to nix the play and order a handoff instead.

“I was, but we were confident that if it didn’t work and the throw wasn’t there that we wouldn’t throw an incompletion," Fangio said. "If you’re going to second-guess anybody, you should second-guess me on it because I approved it.”

Fangio didn't have any updates on left tackle Garett Bolles (ankle) and cornerback Bryce Callahan (knee), who both left in the fourth quarter.

The Broncos could receive a boost in the defensive backfield this week with Michael Ojemudia and Essang Bassey possibly returning.

110 1/2 — That's the number of regular-season sacks for Miller, which is the most in Broncos history. His most sacks were on Chargers and Colts QB Philip Rivers (16).

The Broncos travel to Dallas to face the Cowboys on Sunday — without Miller.