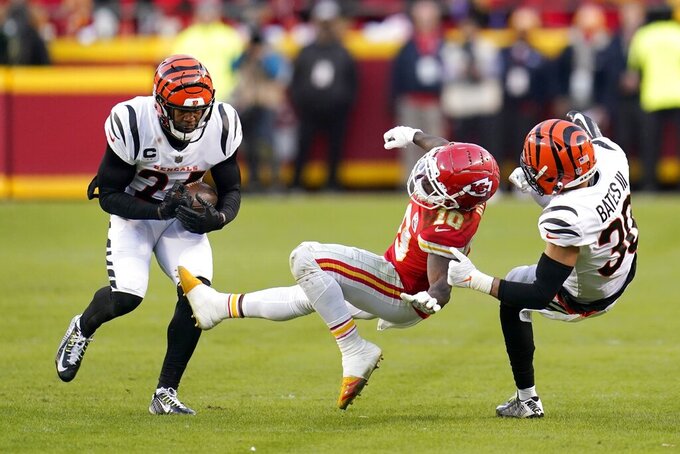 KANSAS CITY, Mo. (AP) — The Kansas City Chiefs followed perhaps the greatest 13 seconds in franchise history in the divisional round against the Bills with 13 seconds late in the first half of the AFC title game against Cincinnati that they'd rather just forget.

Not to mention most of the next 30 minutes and overtime.

In a loss both heartbreaking and humiliating, one of the league's prolific offenses failed to put the game away just before the break Sunday, then never reached the end zone in the second half. The Bengals took advantage of Kansas City's many mistakes to dig out of a 21-3 hole, force overtime and watch Evan McPherson drill a 31-yard field goal for a 27-24 victory, giving the long-downtrodden franchise its first conference championship in 33 years.

“It's definitely disappointing,” said Chiefs quarterback Patrick Mahomes, who threw for 275 yards and three touchdowns but also had two second-half interceptions, including one in overtime that gave the Bengals the chance to drive for the win.

“With this group of guys we have,” Mahomes said, “we expect to win that game and anything less is not success.”

As the Bengals spilled off the sideline in celebration, the Chiefs slumped in their seats — a complete reversal of the previous week, when the Chiefs beat the Bills in overtime in one of the most exhilarating games in NFL history.

Making the about-face all the more shocking was that it was the Chiefs' offense that let them down.

Mahomes was 18 of 21 for 220 yards and three scores in the first half, finding Tyreek Hill and Travis Kelce for big gains almost at will. His quarterback rating was nearly perfect, as was the Kansas City offense, and coach Andy Reid's team built a 21-10 lead and was 30 minutes away from a third straight trip to the Super Bowl.

The only flub came when the Chiefs had the ball first-and-goal at the Bengals 5 with — you guessed it — 13 seconds left, the exact same amount of time it took them to drive 44 yards for the field goal to force overtime against Buffalo.

This time, Mahomes threw incomplete on first down. Then he completed a short pass to Hill, who was stopped short of the goal line as the clock expired, and Kansas City squandered a chance to extend its lead.

It turned out to be a harbinger of the rest of the game.

The Chiefs punted on each of their first two second-half possessions. The third ended when Mahomes had a pass batted in the air and caught by 311-pound defensive tackle B.J. Hill, setting up Joe Burrow's touchdown pass to Ja'Marr Chase and the ensuing 2-point conversion that tied the game 21-all heading to the fourth quarter.

The Chiefs finally showed some resolve, answering 21 straight points by Cincinnati with a long drive of their own. But the red zone left them seeing red one more time: With first-and-goal and less than 2 minutes left, Jerick McKinnon was stuffed and Mahomes was sacked by Sam Hubbard on back-to-back plays.

The Chiefs were fortunate that Harrison Butker, whose 49-yarder sent the Chiefs to overtime with Buffalo, calmly drilled another one from 44 yards at the opposite end of the field to keep their Super Bowl hopes alive.

And it appeared fate was shining on the Chiefs once again when backup Bengals quarterback Brandon Allen called heads and the coin flip landed tails — the exact opposite result of the previous week, when Bills quarterback Josh Allen called tails and the Chiefs took the only possession of overtime for the winning score.

That's where the similarities ended, though.

Mahomes threw an incomplete pass, then nearly had a pass picked by Bengals cornerback Eli Apple, before launching a throw toward Hill down the sideline. The ball was batted in the air by Jessie Bates III, who was perfectly position to make the play, and into the waiting hands of Bengals safety Vonn Bell.

Burrow and the Bengals didn't give Kansas City another chance.

With the game now sudden death, they breezed downfield and into the range of McPherson, who turned around in triumph even before his winning kick had passed through the uprights inside stunned Arrowhead Stadium.