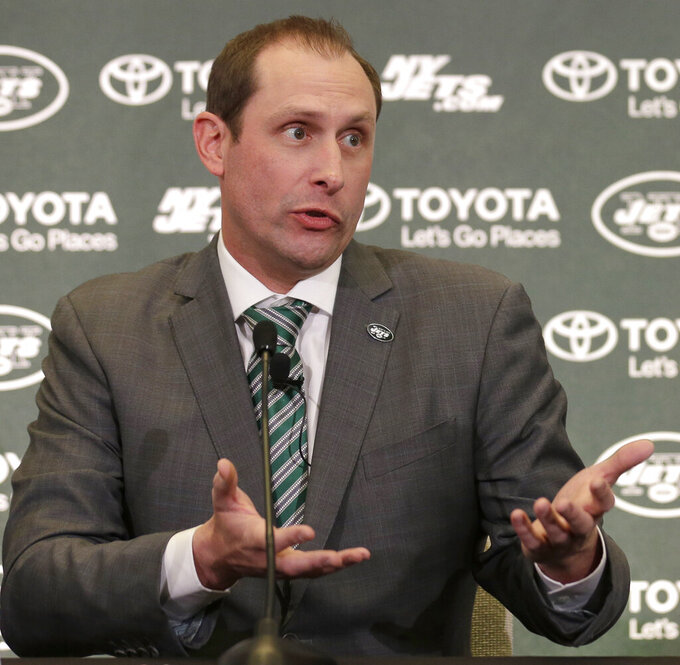 They're aiming for the New England Patriots.

"Pretty much, he's going for that one team that's been winning every single year in this division," linebacker C.J. Mosley said during a conference call Wednesday. "He said that's one of the main reasons he came here and we all believe that. And, the guys that are new additions to the team, we're pretty much here for the same reason."

That, of course, has been the goal for the Jets — as well as the Miami Dolphins and Buffalo Bills — for the better part of the last two decades. And, they've mostly been unsuccessful.

The defending Super Bowl champion Patriots have won the AFC East 10 straight years, and 15 of the last 16 seasons. Since 2001, Bill Belichick's bunch has finished atop the division for all but two seasons: in 2002, when the Jets won it; and 2008, when the Dolphins finished on top when Tom Brady missed almost the entire season with a knee injury.

"We know what team has been on top for a long time," said Mosley, who spent the last five seasons in Baltimore. "We feel we have the tools and the players and the game plan to get that done."

Gase understands what chasing the Patriots is about after leading the Dolphins the last three years. Miami was 2-4 against New England under him, including regular-season splits the last two years.

The Jets weren't nearly as successful under former coach Todd Bowles, dropping the last six meetings. But this is a different team with new leadership in Gase and lots of new faces on the field, including Mosley, running back Le'Veon Bell, wide receivers Jamison Crowder and Josh Bellamy, and left guard Kelechi Osemele.

"His mindset is that he came here to win," Mosley said of Gase. "At the end of the day, history shows who we have to beat to get to that top spot. Not overlooking anybody else in the division or anybody else on our schedule, but we know if we want to get where we want to be, we know what team we've got to knock off."

The Jets began their offseason program last Monday at the team's facility in Florham Park, New Jersey, and Gase was able to address his players as a group for the first time since he was hired as coach in January. They have held a handful of workouts since, and Gase has certainly made a positive first impression.

"I would say he's very energetic, you know, a pumped-up, hype type of coach," said Crowder, who played in Washington his first four NFL seasons. "I like him from what I see, just me being here in this short amount of time. I'm just looking forward to growing our relationship."

Bellamy is one of the few Jets players who already had some familiarity with Gase, who was the receiver's offensive coordinator in Chicago in 2015. Gase was also one of the main reasons Bellamy signed with the Jets as a free agent last month.

Bellamy also has no doubts that Gase will be able to help turn around a franchise that hasn't made it to the playoffs since the 2010 season.

"He's going to build a culture of just everybody being a dog, having that type of mentality, of being aggressive," Bellamy said. "He's ready to win and we all want to win."

While it's not exactly Rex Ryan's bold declaration in 2009 that he didn't join the Jets to "kiss Belichick's rings," Gase is clearly confident he'll be able to get the job done. That approach is reflected in his coaching staff, particularly defensive coordinator Gregg Williams, and can quickly trickle down to the players.

"It just starts (from) a mental standpoint," Mosley said. "You've got to know where you are. You've got to know where the team is with a new set of coaches on both sides. And, the intensity the coaches (have) themselves trying to get us in the right position, that kind of brings a mentality to the players. We feed off that energy. If they're confident, then that makes us confident.

"When we're both confident together, especially knowing our game plan and know what we can and can't do, that can make us a dangerous team."