Newton, Panthers set to visit Tagovailoa and the Dolphins 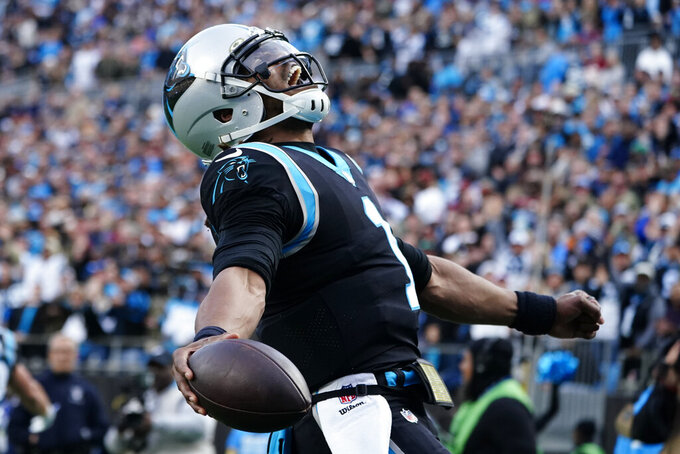 Carolina Panthers quarterback Cam Newton celebrates his touchdown pass to running back Christian McCaffrey during the second half of an NFL football game against the Washington Football Team Sunday, Nov. 21, 2021, in Charlotte, N.C. (AP Photo/Jacob Kupferman)

BETTING LINE: Carolina by 1 1/2, according to FanDuel SportsBook.

TURNOVER DIFFERENTIAL: Panthers minus-4; Dolphins minus-3.

PANTHERS PLAYER TO WATCH: OLB Haason Reddick. He leads the NFC with 10 1/2 sacks and has 18 sacks in his last 15 NFL games dating back to last season with the Arizona Cardinals. He’ll face a Miami offensive line that has allowed 27 sacks.

DOLPHINS PLAYER TO WATCH: QB Tua Tagovailoa. He completed 27 of 33 passes for 273 yards with two touchdowns and one interception in a win last week against the Jets to keep the momentum going for Miami. This week, the NFL’s top-ranked pass defense awaits, though Washington’s Taylor Heinicke completed 16 of 22 passes for 206 yards and three TDs against the Panthers last week.

KEY MATCHUP: Panthers RB Christian McCaffrey vs. Miami’s front seven. Since 2018, McCaffrey has averaged 134.1 yards from scrimmage per game, the most in the NFL. His 11 career 100-yard receiving games are the most by any NFL running back in history. The Dolphins rank 29th in the league in yards allowed -- but have tightened up considerably in the last three weeks.

KEY INJURIES: The Panthers could be down to third-string LT Brady Christensen against Miami. Starter Cam Erving (calf) remains on injured reserve while backup Dennis Daley went down with a glute injury last week against Washington, forcing the third-round pick into action.

SERIES NOTES: For whatever reason, when it’s time for the Dolphins and Panthers to play, it happens in November. This is the seventh meeting between the teams, the sixth to be played in November. ... Combined score of the series: Dolphins 124, Panthers 121. ... The Dolphins have never had the same quarterback start twice against Carolina. In descending order, they’ve used Jay Cutler, Ryan Tannehill, Chad Henne, Gus Frerotte, Jay Fiedler and Dan Marino against the Panthers -- and of those, Marino is the only one who didn’t throw a touchdown pass. ... In the last Dolphins-Panthers meeting, Carolina QB Cam Newton was terrific, completing 21 of 35 passes for 254 yards and four touchdowns. Newton also carried five times for 95 yards in the 45-21 win.

STATS AND STUFF: 'Carolina is 3-2 on the road, Miami 2-3 at home. ... Newton has lost his last nine starts for the Panthers dating back to the 2018 season. His last win as a Carolina starter came on Nov. 4, 2018. ... Newton is 3-1 all-time against Miami, going 2-0 with Carolina and 1-1 with New England last season. ... Carolina enters this week as the NFL’s most-penalized team, getting flagged 81 times. The Dolphins are tied for fifth with 75 penalties -- one more than they had in all of 2020 -- though it should be noted that they’ve been hit for only the 16th-most penalty yards this season. ... Carolina K Zane Gonzalez has made 16 straight field goal attempts. He leads the NFL with 12 field goals of 40 or more yards, despite not joining the Panthers until Week 3. ... Dolphins WR Jaylen Waddle is up to 68 receptions, 19 more than any other rookie in 2021. ... Miami RB Myles Gaskin is coming off a season-best 89 yards rushing in the win over the Jets.

FANTASY TIP: Newton has looked great since rejoining the Panthers, but bear in mind that the Dolphins have allowed only 12 points per game during their three-game winning streak.