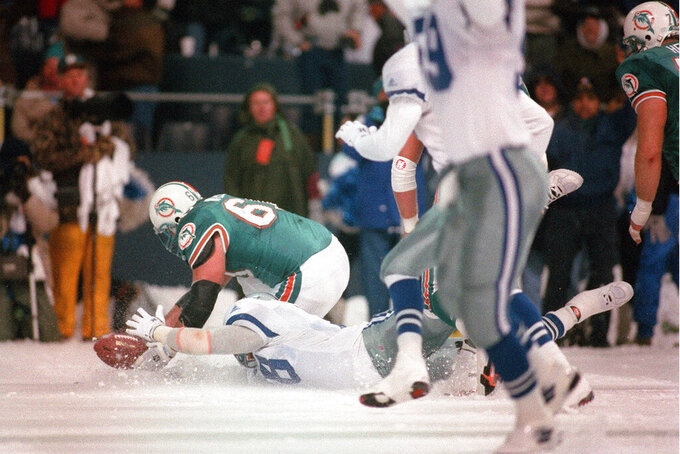 FILE - In this Nov. 25, 1993, file photo, Dallas Cowboys' Leon Lett (78) and Miami Dolphins' Bert Weidner (60) reach for a ball after Lett slides into the ball after the Cowboys blocked a field goal attempt in the snow during an NFL football game in Irving, Texas. After Lett touched the ball the Dolphins recovered and then kicked again for the 16-14 win. (Star-Telegram via AP)

As part of its celebration of its 100th season, the NFL is designating a Game of the Week, each chosen to highlight a classic matchup. For Week 3, it's the 1993 Thanksgiving Day matchup between the Miami Dolphins and the Dallas Cowboys.

To mark each Game of the Week, the AP will be reprinting its story of a classic matchup in the rivalry. The following is the story from the 1993 Thanksgiving Day matchup between the Miami Dolphins and the Dallas Cowboys that became known as the Leon Lett Game, first published Nov. 26, 1993 and written by Sports Writer Denne H. Freeman.

IRVING, Texas (AP) — Don Shula has coached in 486 National Football League games, but never had he witnessed anything like Leon Lett's blunder on a bizarre snowy Thanksgiving Day in Texas Stadium.

"I've never seen one end like that before," the Miami coach said of Pete Stoyanovich's second-chance, last-second field goal that gave the Dolphins a startling 16-14 victory over the Dallas Cowboys.

Lett, a defensive tackle whose hotdog play in January's Super Bowl allowed Buffalo's Don Beebe to catch him from behind and stop a sure touchdown, touched the ball after Stoyanovich's 41-yard attempt was blocked by Jimmie Jones, allowing Miami's Jeff Dellenbach to recover on the Dallas 1 with three seconds to play.

After his teammates scraped away snow to clear a kicking area, Stoyanovich hit the winner through the snowy mist from 19 yards on a day better fit for tobogganing as the frozen crowd at Texas Stadium sat in shocked amazement.

"It's the most disappointing loss I've ever been around," said Dallas Coach Jimmy Johnson. "We had it won. Leon made a mistake. One of a hundred mistakes in the game. But that one cost us."

As for the 9-2 Dolphins, they piled on each other as if they had just won the championship.

"I thought it was all over when Pete got blocked but at least our people had the knowledge to get down there and recover it," said Shula, who gained his record 327th career win. "You don't ever give Stoyanovich a second chance."

Said Dellenbach: "We all had the presence of mind that they had to touch the ball so we stayed away. I tried to get them to touch it and they did. We knew what the rules were."

Referee Ed Hochuli said once a ball is blocked, it is similar to a punt. Miami could gain possession only if Dallas touched the ball. Otherwise, it didn't matter if the Dolphins grabbed it. They couldn't advance it and the Cowboys would get possession. All Dallas had to do was let the ball roll to a halt.

But Lett suddenly slid in, kicking the ball in the process, and Dellenbach recovered. The Cowboys couldn't believe it. The crowd hushed. The officials huddled. The players argued. Then came Hochuli's ruling: Miami's ball with three seconds left.

Coincidentally, Lett had lost the ball on the 1 in the last Super Bowl to Beebe, who batted it out of his hands after a fumble recovery with the Cowboys romping.

Said Johnson: "I still don't know exactly what happened but someone said Leon's leg hit the ball as he slid. We are hurting now. ... I told Leon we all make mistakes and that's part of this game. Darrin Smith was telling everybody to get away from the ball, get back!"

Smith said not everybody knows what to do in that situation.

"I mean, it's a strange play," he said. "It's happening fast. He just went for the ball. He's trying to get the ball so we win."

Lett left the locker room without saying a word. A friend grabbed his clothes and took them to him in the training room so he wouldn't have to face reporters.

"I grabbed Troy (Aikman) and we were hugging, then they said they had the ball," Irvin said. "It was all so strange."

Rookie Kevin Williams caught a touchdown pass and returned a punt 64 yards for a touchdown as Dallas (7-4) apparently had the game in hand.

The game was played in the harsh conditions of a 5-degree wind-chill factor. It was the first time it had ever snowed during a Cowboys' regular season home game in Texas Stadium.

"Can you believe this one for bad luck?" asked Cowboys safety James Washington. "It's the unluckiest thing I ever saw."

"As soon as I get back to Miami, I'm going to take my kids to see Santa Claus and thank him," said Miami defensive tackle Mike Golic. "Man, oh, man, what a game."