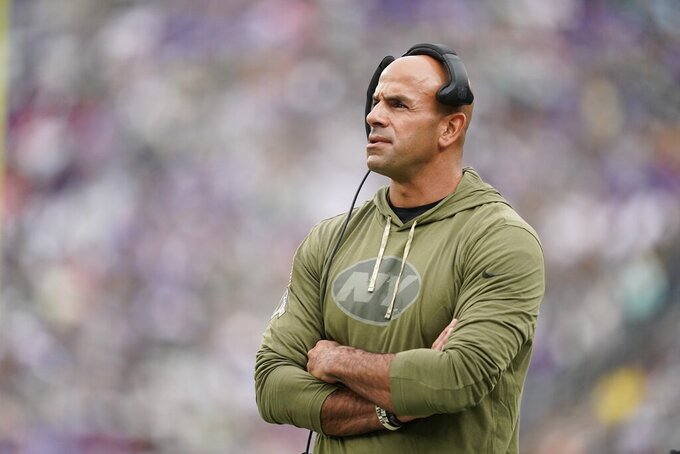 The NFL posted significant gains in hiring women for coaching, team front-office and league-headquarters positions, according to an annual diversity report.

Thursday’s report card from The Institute for Diversity and Ethics in Sport (TIDES) at Central Florida assigned an overall B grade for the league, with a B-plus for racial hiring and a B for gender hiring. The report examined a range of positions at the league office and within franchises using data for the 2022 season.

The gender results were an upgrade from last year's C grade. Specifically, the numerical score of 81.4 represented an increase of 6.4 percentage points from 2021. That led to a slight gain in the overall score (83.2) despite a decline in the racial hiring score (85.0) due to updated census data.

As with last year, team-level grades typically lagged behind the league's office.

TIDES director and lead report author Richard Lapchick told The Associated Press that the gender gains were “the biggest positive, and it’s bucking the trend of most of the leagues where gender scores have been going down.”

“I think the league office has placed that emphasis,” Lapchick said. “Dasha Smith, who’s the head of that sector of the office (as executive vice president and chief people officer), is one of the highest-ranking women in professional sports. I think it’s something she’s paid particular attention to — certainly not exclusively — but her leadership has been key.”

The study also reported 15 women working in coaching roles during training camp — the highest number for all men’s leagues evaluated annually by TIDES – and six in full-time coaching roles, with four being people of color.

Additionally, women held an all-time high of 41.3% of positions at the NFL headquarters, representing a significant climb from 27.9% a decade ago and 30.3% in 2015.

“We are pleased with the recent progress we have made with increasing diversity in almost all areas at the clubs and the league office, especially with women, but realize there is still much work to do throughout the organization," NFL senior vice president and chief diversity and inclusion officer Jonathan Beane said in a statement to the AP.

"It takes a collective effort to drive sustainable results and we have committed ourselves to do so. The NFL remains committed to diversity, equity and inclusion as core values of our league and we are continuously working to make sure our hiring practices across all levels reflect that.”

The league received A-minus grades for both racial and gender hiring at the NFL headquarters. Those were higher than team-level categories such as executive leadership (C in racial, C-minus in gender), vice presidents (C in racial, D-plus in gender) and senior administration (C-plus racial, C gender).

The league started the year with six people of color as head coaches for a C grade and currently has seven: Pittsburgh’s Mike Tomlin, Houston’s Lovie Smith, Tampa Bay’s Todd Bowles and Carolina’s Steve Wilks, who are Black; Miami’s Mike McDaniel, who is biracial; the Jets’ Robert Saleh, who is of Lebanese heritage; and Washington’s Ron Rivera, who is Hispanic.

Smith, Bowles and McDaniel are in their first season. Wilks joined the list last month after taking over as the Panthers' interim coach following the firing of Matt Rhule, though the racial makeup of the league's head coaching ranks remains a long-running issue.

The league also received an A-plus grade for initiatives to improve diversity hiring.

TIDES issues annual report cards on racial- and gender-hiring practices in professional leagues such as the NBA, WNBA, Major League Baseball and Major League Soccer, as well as for college sports in diversity hiring and graduation rates.