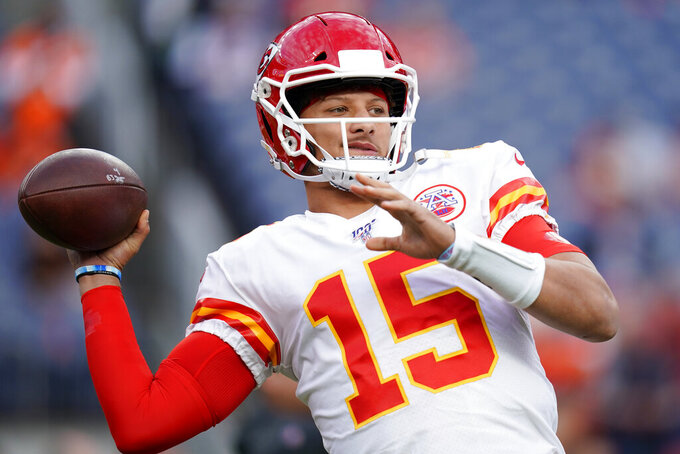 DENVER (AP) — With Patrick Mahomes sidelined, fans across the NFL may be longing for the days when the backup quarterback's job was to carry a clipboard and not the hopes and dreams of an entire franchise.

Mahomes escaped significant ligament damage when he dislocated his right kneecap Thursday night in Kansas City's 30-6 pummeling of the Denver Broncos and there is optimism the reigning NFL MVP could be back on the field in about a month.

Mahomes had an MRI exam Friday that showed the ligaments were intact, a person familiar with the situation told The Associated Press. The person spoke on condition of anonymity because the team was still sorting through the results and putting together a timetable for his return.

"He's a huge part of this team, huge part of the league. You just hate to see that," said journeyman Matt Moore, the latest No. 2 thrust into a leading role in this "Year of the Backup Quarterback."

Starting with Andrew Luck , who retired at age 29 after dealing with a series of injuries, the league's celebration of its 100th season has been marred by the loss of some of its biggest stars.

Now, the league's brightest young star is hurt, too.

Shortly after becoming the fastest player in NFL history to throw for 7,500 yards, in just his 25th game, Mahomes got hurt not on one of his improvisational masterpieces but on the most basic play, a quarterback sneak.

The stadium grew silent as one by one players peeled off the pile and Mahomes stayed down, his right leg stuck at an awkward angle before he rolled onto his back, ripped off his helmet and covered his face.

"I don't even want to think about that," receiver Tyreek Hill said. "We are just trying to move on from it, and I will continue to pray for my dog."

"It was out of whack," tight end Travis Kelce said. "I couldn't even describe it. You looked at it and were like, 'On no, there is something wrong with him.'"

"I've never seen anything like that on the field before," Harris said. "His knee was literally all the way to the side, his kneecap was. I wish him the best. We definitely need him in the league, he's definitely a big attraction in the league."

Mahomes shooed away a cart and trainers helped him off the field once his kneecap was popped back into place. Then, he walked gingerly to the locker room.

"Obviously we need him to get wins," Hill said. "But now we just have to move on."

The Chiefs' hopes of reaching their first Super Bowl since 1970 — the year Mahomes' father, former big leaguer Pat Mahomes, was born — will rest at least for a while not on their magnificent maestro but on Moore, a 35-year-old career backup who wasn't even in the league last year as he sought to transition into either coaching or scouting.

Moore attended Kyler Murray's pro day at Oklahoma this spring alongside Adam Engroff, the Miami Dolphins' director of college scouting. But Moore found himself in demand again when Chad Henne broke an ankle in the preseason and he signed Sept. 1 to back up Mahomes.

It was Kansas City's dominant defense that really stepped up when Mahomes went out Thursday night, but Moore did throw a 57-yard TD pass to Hill with Chris Harris Jr. in coverage. Overall, he was 10 of 19 for 117 yards.

"It is crazy. I am pretty sure about three or four of the guys out there on the field had never caught a ball from Matt even in practice," Kelce said. "I know I hadn't."

While backups Teddy Bridgewater in New Orleans and Kyle Allen in Carolina have each gone 4-0, most fill-ins aren't so fortunate.

Only four starting QBs who own Super Bowl rings are still standing: the ageless Tom Brady, the rejuvenated Aaron Rodgers, the dependable Russell Wilson and the floundering Joe Flacco, who somehow escaped injury Thursday night despite being sacked a career-high eight times and knocked down on most of his other drop-backs.

Hill insists it's business as usual with Moore under center instead of Mahomes.

Earlier this week, Broncos coach Vic Fangio said facing Mahomes is the toughest task in the football because "you have to defend two plays: the one they've called and then the one he might create."

Now, those skills are shelved, like those of so many others who have mastered the league's paramount and most precarious position.