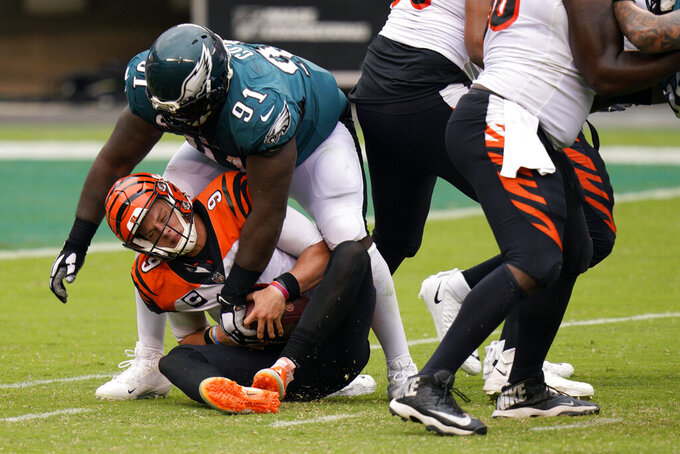 COLUMBUS, Ohio (AP) — The Cincinnati Bengals didn’t lose Sunday, but the 23-23 tie with the Philadelphia Eagles was just as difficult to take.

Quarterback Joe Burrow was sacked eight times, and the Bengals (0-2-1) offensive line still can’t give him enough time to look downfield. The running game is virtually non-existent. The defense was good at times, but still is giving up too much on the ground.

“It’s starting to hurt a little bit,” acknowledged Bengals wide receiver Tyler Boyd, who caught a team-high 10 passes for 125 yards. “This team, losing and losing, I don’t want that to become a thing for us because we’re a talented team on both sides of the ball that can change the game.”

Burrow continues to demonstrate why he was the Heisman Trophy winner and No. 1 overall draft pick. Despite the line’s inability to let him get set in the pocket, he completed 31 of 44 passes for 312 yards, including touchdown passes of 1 yard and 4 yards to rookie receiver Tee Higgins. His toughness and ability to create something out of nothing kept the Bengals in the game.

But nobody was good enough to win in Philadelphia on Sunday.

Following a pair of pass interference penalties by the Bengals, Philadelphia quarterback Carson Wentz ran 7 yards for the tying touchdown with 21 seconds left in regulation. Overtime was futile for both teams, with the Bengals coming up empty on four chances to win the game.

“It will never be about momentum or positive experiences to me,” Burrow said. “I’m about winning, I expect to win, I know we expect to win. No moral victories around there.”

Coach Zac Taylor said Monday the tie hurts as much as a loss.

“We've all got to take ownership of what's happening here,” he said. “I don't feel like anybody's running from anything.”

Burrow is developing chemistry with five-year pro Boyd and Higgins, the former Clemson star and second-round draft pick. With veteran receiver A.J. Green off to a slow start, finding those targets is even more critical for the young quarterback as he tries to find big plays. The defense had two interceptions against zero turnovers for the Bengals, and the pass rush was significantly better.

The offensive line continues to be terrible. Fred Johnson and Billy Price both struggled at right guard filling in for Xavier Su’a-Filo, who suffered an ankle injury in the season opener against the Chargers. Burrow was under pressure and hit a total of 18 times by the Eagles.

On Monday, the team looked to the practice squad for help, signing guard Keaton Sutherland and waiving guard Shaq Calhoun.

The Bengals' attack was again one-dimensional. Joe Mixon managed just 49 yards on 17 carries, an average of 2.9 yards per touch.

After hauling in seven of eight targets for 72 yards and a touchdown against Cleveland, Boyd grabbed 10 of his 13 targets on Sunday.

Cincinnati got through the game without any major injuries. Burrow had the wind knocked out of him after taking a huge hit from Eagles DT Malik Jackson in the second quarter. Burrow went out for a play but returned. Jackson was flagged for roughing the passer.

Same as the first two weeks: Keep Burrow from getting hit so often and try to slow down opponents' run game. Getting Su’a-Filo back from injury would be a boost for the OL, but that may not be soon. The Bengals have a decent chance to get their first win Sunday against Jacksonville (1-2).