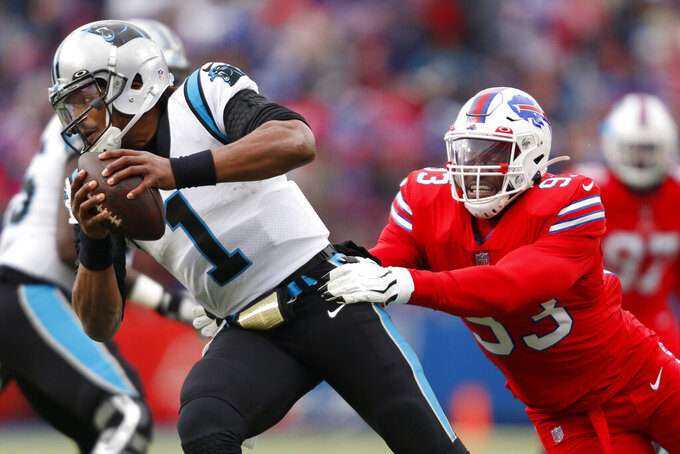 The Washington Commanders continue to add players from Ron Rivera's days with the Carolina Panthers.

Washington signed defensive end Efe Obada, who made his NFL debut in 2018 when Rivera and executive VP of football and player personnel Marty Hurney were in charge with Carolina. The move Wednesday came a week after the Commanders added another player from Rivera's Panthers tenure in left guard Andrew Norwell.

Obada had 3 1/2 sacks and 12 tackles in 10 games with Buffalo during the 2021 regular season. The 29-year-old who was born in Nigeria and grew up in the United Kingdom first drew interest in 2015 and signed with Dallas, Kansas City and Atlanta but did not play.

He was the first player from the NFL International Player Pathway program to make a 53-man roster. In 52 regular-season games, Obada has 62 tackles and 11 sacks and he also made three tackles in a Bills playoff game this past year.

Adding Obada is just the latest in a series of moves Rivera has made to increase the Commanders' resemblance to the Panthers he coached from 2011-19.

Norwell was the most recent before Obada. Signed to replace Ereck Flowers after the converted tackle was released, Norwell cited Rivera and offensive line John Matsko as major reasons he signed with Washington over a few other teams that tried to sign him in free agency out of Jacksonville.

"They had a tremendous impact early on," said Norwell, who played under Rivera and Matsko with Carolina from 2014-17 before spending the past four seasons with the Jaguars. “Coach (Rivera), he’s very consistent. He gives everybody an opportunity. He gave me an opportunity when I was a rookie, and I’m very fortunate for that opportunity.”

“The team wanted me, and I wanted to be back, so everything just came into agreement and everybody was happy,” said Sims, who Rivera has singled out as a player he would like to have a bigger role in the offense moving forward.

That will have a lot to do with Carson Wentz, who will be the first quarterback since the franchise rebranded as the Commanders. The team acquired Wentz from the Indianapolis Colts, who on Monday traded for Matt Ryan from the Atlanta Falcons in another spin of the league's wild quarterback carousel.

Sims said Wednesday his reaction to the Wentz trade was: “Let's go. Let's start working.” Sims will have to change numbers after Wentz was given his preferred No. 11 and declared the starting QB.