Odds stacked against Steelers heading into game vs. 49ers 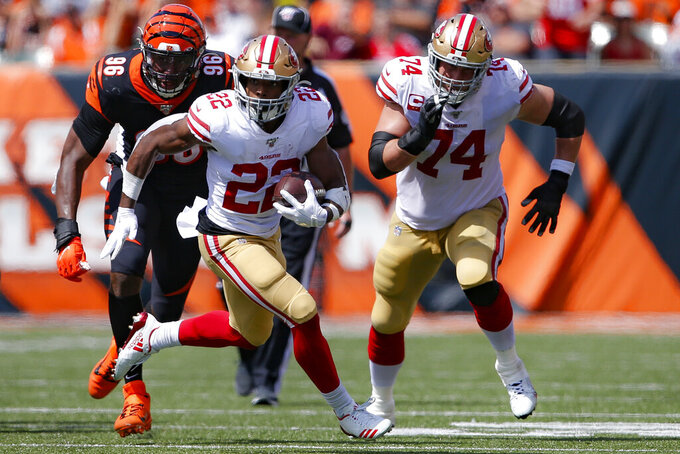 San Francisco 49ers running back Matt Breida (22) runs the ball during the first half an NFL football game against the Cincinnati Bengals, Sunday, Sept. 15, 2019, in Cincinnati. (AP Photo/Gary Landers)

SANTA CLARA, Calif. (AP) — Two straight losses to open the year, a season-ending injury to the franchise quarterback, and a West Coast trip to face an undefeated team all add up to many people writing off the Pittsburgh Steelers before the end of September.

"I don't care about many people's eyes and things of that nature, man," he said. "We're used to living in the eye of the storm in this business at this level. I do enjoy the challenges and the adversity that the game presents, so from that standpoint it does create a sense of urgency that's a good fuel. But in terms of perceptions and what people are saying outside our organization, it would be tough for me to care less."

The Steelers (0-2) are counting on that urgency to make up for the loss of Ben Roethlisberger to an elbow injury and help Mason Rudolph succeed in his first career start when Pittsburgh takes on San Francisco (2-0) in the 49ers' home opener on Sunday.

Rudolph, a third-round pick out of Oklahoma State in 2018, beat out Josh Dobbs during training camp to be the primary backup. He played well last week during a half of work against Seattle, completing 12 of 19 passes for 112 yards with two touchdowns and an interception that came off a tipped pass.

Rudolph said he was ready for his moment even if he hadn't even gotten on the field in his first 17 games as a pro.

"There have been plenty of quarterbacks who hadn't played immediately. I was encouraged by that," he said. "I tried to have a long-term mentality and understand that hopefully we play in this game a long time. And as long as I am ready for my opportunity, that's kind of all that matters."

While the message for the Steelers is hope isn't lost despite the rough start to the season, the 49ers are trying to avoid complacency after opening the season with double-digit wins at Tampa Bay and Cincinnati.

It has been rare success for a team that took until December to win its second game in coach Kyle Shanahan's first season in 2017 and until November last year.

"I think our team is smart enough and knows the deal. There's not one person in our building, at least that I've noticed, that feels like we've arrived by any means," Shanahan said.

The Niners are dealing with their own significant injury with star left tackle Joe Staley out for at least six weeks with a broken leg. Sixth-round rookie Justin Skule will get his first career start in place of Staley, who has started all but four games since 2011.

"It's still the game of football," Skule said. "Just take a deep breath, and don't let anything get too big for myself."

IF THE SAFETY FITZ

Pittsburgh expects to start newly acquired safety Minkah Fitzpatrick just days after acquiring him from Miami. The Steelers parted with three picks, including a first-rounder in 2020, for the opportunity to bring in the versatile 22-year-old Fitzpatrick. Though Fitzpatrick played multiple positions with the Dolphins, Tomlin expects to "anchor" Fitzpatrick at free safety until he gets acclimated.

The Niners had a big day on the ground last week, rushing for 259 yards in the team's' sixth-most productive rushing day of the past decade. Making that even more impressive was that the three halfbacks in the game — Matt Breida, Raheem Mostert and Jeff Wilson Jr. — all entered the league as undrafted players. That trio combined for 238 yards, the third most by undrafted players in a game since the merger.

Steelers wide receiver Donte Moncrief could be out of a starting job just two games into his time with Pittsburgh. Moncrief struggled with drops in the opener against New England and was targeted just once last week against Seattle, a third-quarter pass from Rudolph that smacked off Moncrief's hands and helmet and led directly to an interception. Moncrief, signed as a free agent shortly after the Steelers traded Antonio Brown to Oakland, said he has been pressing.

"I know that we haven't been able to depend on him to this point, so he's got some challenges, and we have some challenges moving forward," Tomlin said.

The Niners won back-to-back road games to open the season for the first time in 30 years. Now they come home for their first game at Levi's Stadium with a winning record since losing to Seattle on Thanksgiving night in 2014. The 49ers haven't had a great home-field advantage since moving into Levi's Stadium five years ago, with empty seats a regular occurrence for a team that has won only 17 games the previous four seasons.

"I don't think we've given our fans a lot to be excited about in the two years I've been here at home or the years prior," Shanahan said. "But, when we have, I think our stadium has been loud.

Pittsburgh has struggled in recent years when the team plane has pointed toward the Pacific. The Steelers have lost each of their last four games in the Mountain and Pacific time zones dating back to 2015, including road losses to Denver and Oakland in 2018, teams that combined to go 8-22 against the rest of the league.