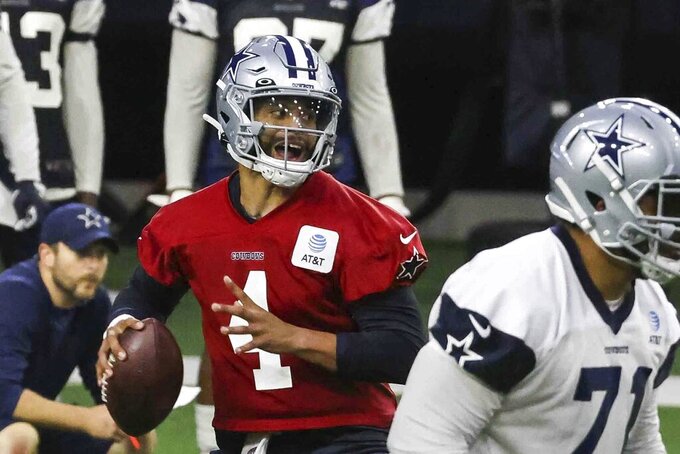 Quarterback Dak Prescott, 4, drops back to throw during the Cowboys' full-squad offseason workouts in Frisco, Texas on Tuesday, May 25, 2021. (Lola Gomez/The Dallas Morning News via AP)

FRISCO, Texas (AP) — Dak Prescott didn't downplay the significance of the first offseason practices for the star Dallas quarterback since his gruesome ankle injury last season, even though his coach thought he might.

Prescott is doing everything except 11-on-11 work, from rollout passes to making sure he carries out the fake by sprinting toward the sideline after handing off to running backs.

“It felt great after long months of recovery,” Prescott said Tuesday after the second of nine offseason practices, minicamp included. “The main goal is to just get back out there with my teammates, getting back on the field, running the huddle.”

Prescott could have been inclined to shrug off such things because he's been around his teammates and coaches most of the time since the compound fracture and dislocation of his right ankle in a game against the New York Giants in October.

Mike McCarthy would have said otherwise.

“It’s big. There’s no question about it,” the coach said. “Just getting the full-speed tempo and working on not just physically but the emotional and the mental components of it to be firing on all cylinders. This is exactly what he needed.”

There were two surgeries. During a practice later in the 2020 season, the team released a video of running back Ezekiel Elliott mimicking Prescott limping with one crutch, and his backfield mate responding by lifting the crutch and taking a few steps, with Prescott trying his best to disguise the limp.

Now, Prescott is pushing the limits of his rehab and recovery, within reason and while knowing he's still a ways from having players flying — and falling — around him.

“The ankle is fine,” Prescott said. “Some of these movements, it’s more about the psychological effect of me not being able to do them, rather than my leg can’t do them. So, to trust it, to push it but to know I’ve got to take care of my body as well on the back end.”

The Cowboys interrupted their first three offseason practices with a day off Wednesday, which means Prescott gets to stick with the rehab of planning of two days on, one day off.

Dallas doesn't go three consecutive days until minicamp June 8-10, which could be another benchmark for Prescott.

“I hope by the time that comes, I’m ready to go and I don’t have to take that third day as a break,” he said.

McCarthy said the quarterback wouldn't do any 11-on-11 drills before training camp in late July, when the Cowboys are expected to return to California after the pandemic forced all teams to stay home last year.

“He’s been moving with a lot of confidence for some time now,” McCarthy said. “He’s really capable of doing everything that we’ve done the last few days. We’re just being cautious by keeping him out of the team periods. He’s put a ton of work into this. I’d say he’s ahead of schedule.”

The Cowboys rallied to beat the Giants after Prescott's injury, but lost their first four games without him on the way to a 6-10 finish in McCarthy's first season. Dallas had the No. 1 offense in the NFL at the time of the injury, but dropped off significantly without the 2016 NFL Offensive Rookie of the Year.

Now Prescott is preparing for his first season since signing the richest contract in the history of the storied franchise, a $160 million, four-year deal.

“As he started to ramp up and started throwing these last few days, seeing that has had a lot of the offensive guys gain a lot of confidence,” tight end Dalton Schultz said. “Seeing him getting back in action and getting right back where he left off has been awesome.”

NOTES: LB Jaylon Smith is switching to retired quarterback Tony Romo's No. 9 after playing his first three seasons in No. 54. NFL rules require Smith to pay for the inventory of jerseys and T-shirts already in the market, but he says it was worth it. Smith wore No. 9 from youth football through his years at Notre Dame. ... RB Ezekiel Elliott didn't participate in Tuesday's voluntary workout, but McCarthy said he was at team headquarters.