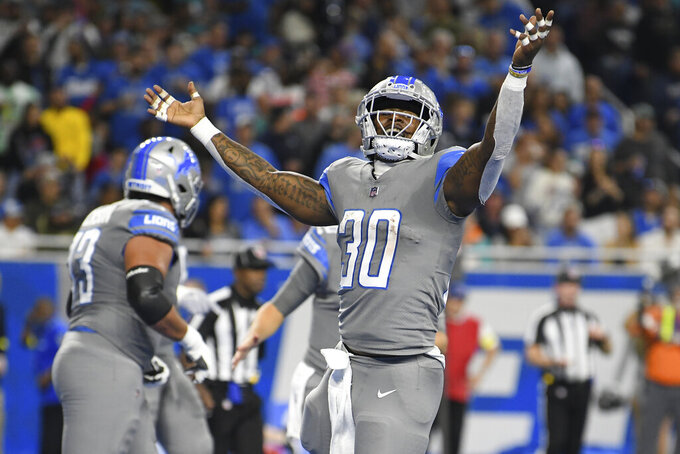 Detroit Lions running back Jamaal Williams reacts after 1-yard touchdown run during the first half of an NFL football game against the Miami Dolphins, Sunday, Oct. 30, 2022, in Detroit. (AP Photo/Lon Horwedel)

TURNOVER DIFFERENTIAL: Packers minus-3; Lions minus-5

PACKERS PLAYER TO WATCH: RB Aaron Jones is coming off a 143-yard rushing performance at Buffalo. He caught two touchdown passes a week earlier in a 23-21 loss at Washington. Jones has rushed for 575 yards this season and is averaging 5.87 yards per carry. Jones has averaged 142.3 combined yards rushing and receiving per game in Green Bay’s past four matchups with the Lions.

LIONS PLAYER TO WATCH: RB Jamaal Williams: This former Packer has eight touchdown runs this season to rank second in the league, behind only Cleveland’s Nick Chubb. Williams has rushed for 464 yards and is averaging 4.5 yards per carry.

KEY MATCHUP: Jones and Packers RB A.J. Dillon vs. Lions run defense. Jones and Dillon ran for a combined 197 yards at Buffalo as the Packers totaled a season-high 208 yards rushing on 31 carries. They could run wild against a Lions defense that is allowing 154.9 yards rushing per game and 5.1 yards per carry.

SERIES NOTES: Detroit’s 37-30 victory in the final week of the 2021 regular season came after the Packers already had clinched the NFC’s top playoff seed, so Aaron Rodgers only played the first half of that game. Detroit’s Amon-Ra St. Brown and Khalif Raymond each had more than 100 yards receiving in that game. That game ended a string of five straight Packers wins in this series. ... Green Bay’s 103 regular-season victories over Detroit are the most the Packers have against any single opponent. ... The Packers are 32-12 against the Lions since 2000.

STATS AND STUFF: The Packers have scored at least 30 points in each of their past four matchups with the Lions. Green Bay hasn’t exceeded 27 points in a game this season. ... The previous time the Packers lost four straight before now, they responded with an eight-game winning streak to reach the NFC championship game. That was in the 2016 season. ... The Packers haven’t dropped five consecutive games since 2008. ... Jones ranks fifth in the NFL in yards rushing. ... The Packers are allowing opponents to convert just 29.9% of their third down opportunities. Tennessee is the only team with a better percentage in third down defense. ... The Packers are 18-6 against the Lions in games that Green Bay QB Aaron Rodgers has started. Rodgers has thrown 52 touchdown passes and eight interceptions against the Lions. The only player ever to throw more touchdown passes against the Lions is former Packers QB Brett Favre with 58. ... Rodgers has thrown 40 touchdown passes and only one interception against NFC North opponents since 2020. ... The rebuilding Lions fired DB coach Aubrey Pleasant, replacing him with safeties coach Brian Duker, on Monday and traded standout TE T.J. Hockenson the next day to Minnesota to improve draft positioning in 2023 and 2024. ... Detroit scored 27 points and had 326 yards and a 10-point lead at halftime last week against Miami, and was scoreless with 67 yards in the second half of the four-point loss. ... The Lions had a five-game losing streak before November for the second time in two years under coach Dan Campbell and he is 4-19-1 overall with them.

FANTASY TIP: St. Brown hasn’t caught a touchdown pass since Sept. 18, but this could be the week he gets back in the end zone. St. Brown had eight catches for 109 yards and a touchdown when the Packers visited Detroit last season. The trade of Hockenson figures to have the Lions relying even more on their wideouts in the passing game.