Panthers would feel 'comfortable' taking at QB at No. 6 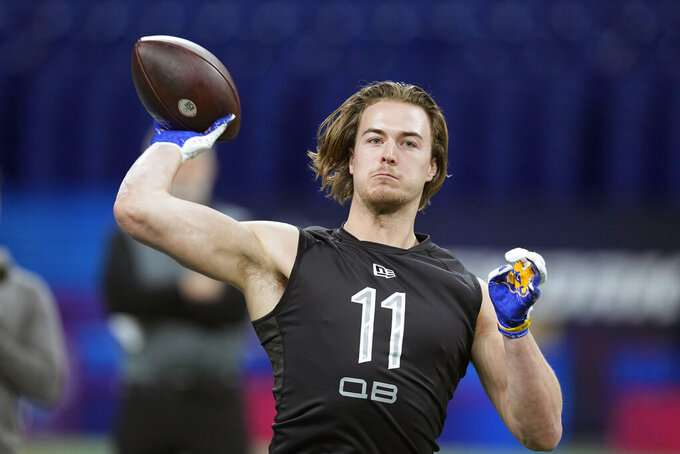 Whether that will be with the No. 6 pick in the NFL draft Thursday night or via trade for a veteran after the draft remains to be seen.

While this is not considered a strong quarterback class — and many draft pundits question whether any of them are worthy of being selected in the top 10 — Fitterer said the Panthers would feel comfortable taking one with the No. 6 pick.

“I think there is a talent level on a couple of them this year that can help us, whether that is at six or moving around,” Fitterer said. “If we had to pick one at six I would feel comfortable with one of them, or actually a couple of them, at six.”

Fitterer said trading for a veteran remains an option but that likely wouldn’t happen until after the NFL draft. He wouldn’t discuss specific players on other NFL teams because of league rules, but San Francisco’s Jimmy Garoppolo and Cleveland’s Baker Mayfield are among the veteran QBs on the trade market.

Fitterer said ideally the Panthers would like to draft a quarterback.

“It’s great to go with a young guy," he said. "And why are some quarterbacks available that are out there in the market? You have to ask yourself that.″

The top quarterbacks in this draft are considered to be Pittsburgh's Kenny Pickett, Liberty’s Malik Willis and Mississippi’s Matt Corral. The Panthers have met with those three QBs in person, as well as North Carolina's Sam Howell, Cincinnati's Desmond Ridder, and Western Kentucky's Bailey Zappe during the pre-draft process.

Currently, Darnold and P.J. Walker are the only quarterbacks on the Panthers' roster.

“In our conversation, I said, ‘hey listen, we are going to add to this group' through this weekend," Fitterer said of his meeting with Darnold on Monday. "It's open competition. It's his spot right now. But whoever can take this spot and run with it, we're going to do that. So he was good with that. We are on the same page. We know we need to stabilize that position and we're looking forward to adding to it."

Darnold struggled in his first season in Carolina after the team traded second-, fourth- and sixth-round picks to the New York Jets.

After leading the Panthers to a 3-0 start, Darnold went 1-7 the rest of the season, completing 59.9% of his passes with nine touchdowns and 13 interceptions. He was sacked 35 times in 12 games.

The Panthers are limited in what they can do in the draft.

The Panthers don’t have picks in the second and third rounds and their second selection isn't until No. 137 overall.

Fitterer said the Panthers will entertain trade down offers, but feels they can get a great player at No. 6.

Offensive tackle and defensive end are also considered areas of need for the Panthers.

NOTES: Fitterer said the Panthers will pick up the fifth-year option on Brian Burns' contract with the hopes of signing the defensive end to a long-term deal. Burns has 25 1/2 sacks in three seasons.