Patriots are nearly unanimous No. 1 in AP Pro32 poll 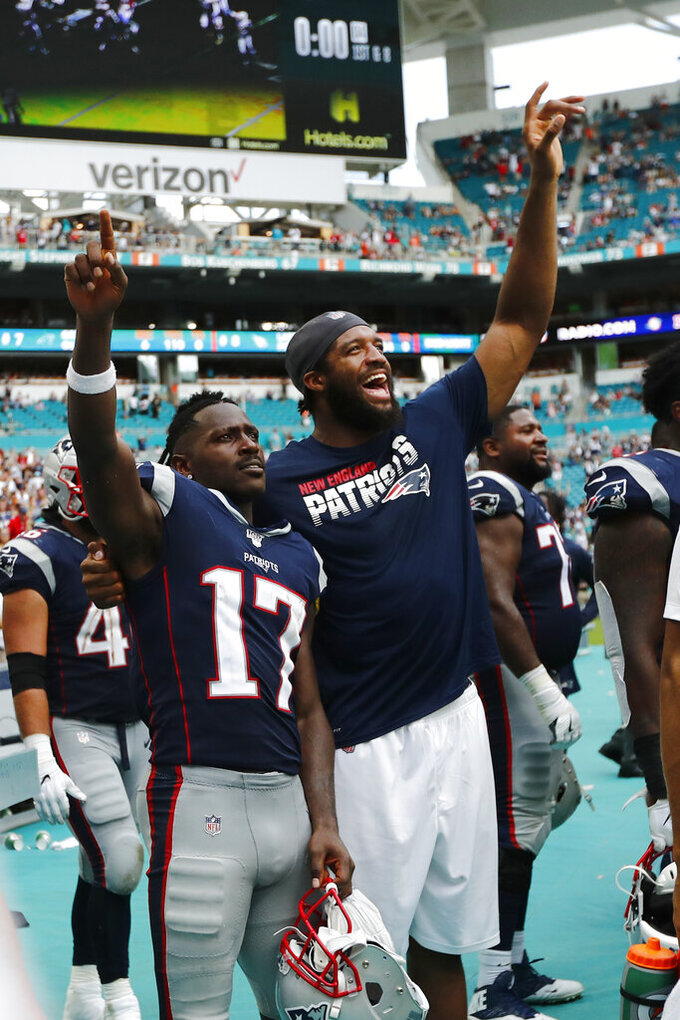 NEW YORK (AP) — The New England Patriots are one of nine 2-0 teams in the NFL.

The Patriots have maintained their dominating position at the top of the AP Pro32 poll by rolling over their first two opponents by a combined 76-3. Next up is the winless New York Jets this weekend.

The Jets are a 22-point underdog against the defending champions and will start third-stringer Luke Falk at quarterback in Foxborough.

For the second consecutive week, New England received 11 of the 12 first-place votes for 383 points in balloting Tuesday by media members who regularly cover the NFL.

"Bill Belichick shows no mercy on former Patriots defensive coordinator Brian Flores against the Dolphins, and the New England machine rolls on," Newsday's Bob Glauber said. "There's already talk of an unbeaten season, a testament to how well they're playing."

The Kansas City Chiefs stayed at No. 2, collecting the remaining first-place vote and 368 points.

The Chiefs host the Baltimore Ravens on Sunday in one of the top matchups of Week 3. The Ravens, off to a 2-0 start, jumped three places to No. 5.

"The league's No. 2 defense faces quite a challenge Sunday at Arrowhead, where Patrick Mahomes is waiting," said Ira Kaufman of Fox 13 in Tampa, Florida.

The Los Angeles Rams moved up a spot to No. 3 after routing the New Orleans Saints 27-9 in a rematch of last season's NFC championship game. The Saints, who will be without quarterback Drew Brees for the next six to eight weeks with a torn ligament in his throwing thumb, fell seven spots to No. 10.

"I'm not optimistic about the Saints in Brees' absence," said Alex Marvez of Sirius XM.

The Dallas Cowboys, Seattle Seahawks and Green Bay Packers, three NFC teams off to 2-0 starts, all made solid climbs in the poll.

The Cowboys moved up two spots to No. 4, and the Seahawks and Packers each jumped four places to Nos. 6 and 7, respectively.

The Philadelphia Eagles and Minnesota Vikings, each coming off close losses, lost some ground. The Eagles fell three spots to No. 8 after Sunday night's loss to Atlanta, and the Vikings dropped two places to No. 9.

"That loss all on (Kirk) Cousins," Fox Sports' John Czarnecki said of the Vikings quarterback who was 14 for 32 for 230 yards with a touchdown and two interceptions in Minnesota's 21-16 loss to Green Bay.