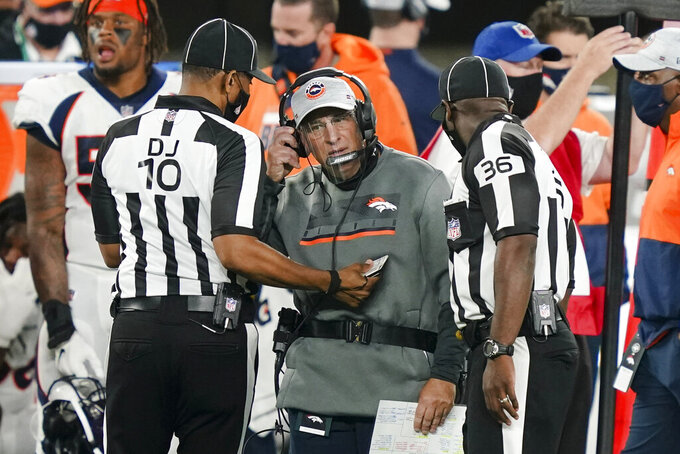 Denver Broncos head coach Vic Fangio talks to officials during the first half of an NFL football game against the New York Jets Thursday, Oct. 1, 2020, in East Rutherford, N.J.Maybe the third time will actually bring a kickoff between for the Denver Broncos and New England Patriots. After having their original Week 5 matchup twice postponed because of a mini outbreak of coronavirus cases on the Patriots that saw four players including quarterback Cam Newton and reigning Defensive Player of the Year Stephon Gilmore test positive, the teams are hopeful they will finally meet this week. (AP Photo/John Minchillo)

FOXBOROUGH, Mass. (AP) — Maybe the third attempt will result in a kickoff between the Denver Broncos and New England Patriots.

After having their original Week 5 matchup twice postponed because of a mini-outbreak of coronavirus cases on the Patriots that saw four players, including quarterback Cam Newton and reigning Defensive Player of the Year Stephon Gilmore, test positive, the teams are hopeful they will finally play on Sunday.

But during an NFL season that has already forced multiple teams to adjust their schedules and endure long layoffs between games, the underlying sentiment among players is that nothing is certain in the shadow of the pandemic.

“I think just with this season, you had an understanding from the get-go that things can constantly change,” Patriots running back Rex Burkhead said. “Anything could happen.”

Due to the disruptions last week, the league retroactively made Week 5 both teams’ bye week. But because of safety concerns the Patriots didn’t return to the practice field until Thursday.

If the game does indeed begin as scheduled on Sunday, it will be 13 days since the New England last played a game and 17 days for the Broncos, who beat the Jets in a Thursday night matchup on Oct. 1.

Broncos coach Vic Fangio said though their layoff has been longer, it helps that they did have a normal week of preparation last week even though the game was ultimately postponed.

“It’s not like we’ve been totally inactive during that time,” Fangio said.

Though he said they did basically have to start from “ground zero” again this week.

“Obviously, there will be some recall from the work that we did last week but we did want to start all over,” he said.

Those preparations now include getting ready for the likely return of Newton and Gilmore. Newton was activated from the COVID-19 reserve list Wednesday, followed by Gilmore on Thursday.

Newton's initial positive test was Oct. 2, two days before the Patriots’ loss at Kansas City. New England is 2-1 with him as its starter. Gilmore tested positive on Oct. 7.

According to the NFL’s COVID-19 protocols, a player who tests positive can return after 10 days have passed since the initial positive test or following two consecutive negative virus tests 24 hours apart.

Gilmore's return to action wouldn't be good news for a Denver passing offense that ranks 27th, averaging 214 yards per game. The Broncos also have also thrown six interceptions in 2020, third most in the league behind Philadelphia (9) and Minnesota (7).

Melvin Gordon III is coming off his best game — and a very bad decision. Gordon ran for 107 yards and two TDs in Denver’s win over the Jets two weeks ago but he was cited by Denver police for driving under the influence and speeding. That opens the door for Phillip Lindsay, the Broncos’ two-time 1,000-yard rusher who’s been out since sustaining a turf toe injury in the opener.

Brett Rypien would have made his second consecutive start had the Broncos and Patriots played last weekend. Now, it’s almost certain that starter Drew Lock will be back from the sprained right shoulder he suffered in Week 2.

“I’m upset that our game was canceled, we had a little (change) in schedule and lost our bye week later in the year,” Lock said. “But I’m also excited that it means I miss fewer games than I was supposed to, and that makes me happy.”

This could mark the third straight game that the Patriots have had to make adjustments on the offensive line because of injuries.

Starting center David Andrews remains on injured reserve (hand). Left guard Shaq Mason began the week still dealing with the calf injury that sidelined him for the Kansas City loss. Left tackle Isaiah Wynn, who has started all four games this season, also is recovering from a calf injury.