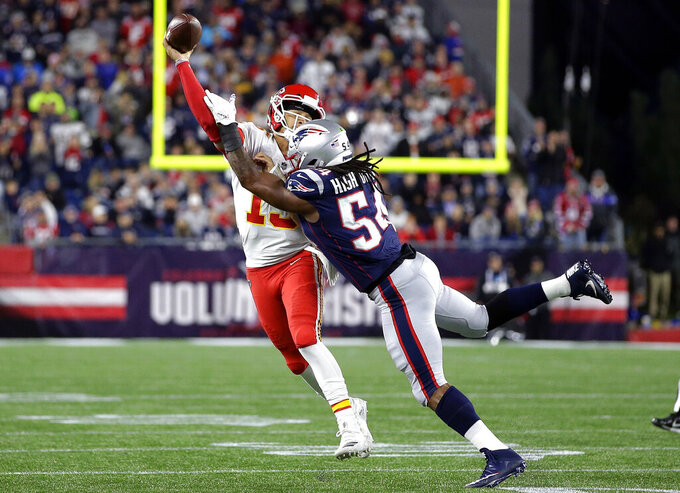 FILE - In this Sunday, Oct. 14, 2018, file photo, New England Patriots linebacker Dont'a Hightower (54) pressures Kansas City Chiefs quarterback Patrick Mahomes (15) as he tries to pass during the first half of an NFL football game in Foxborough, Mass. In three previous meetings with Kansas City's Patrick Mahomes, the Patriots defense has had its most success when it's been able to force turnovers and get pressure on him. But that's easier said than done against a quarterback who has yet commit a turnover this season and is completing a career-high 68% of his passes. (AP Photo/Steven Senne, File)

FOXBOROUGH, Mass. (AP) — If there’s one thing Bill Belichick is sure of, it’s that there’s no special formula to slowing down the Chiefs offense and quarterback Patrick Mahomes.

“All the superlatives that have been said about him, I’d just be repeating them all," the Patriots coach said of the reigning Super Bowl MVP this week.

What's more, the defending champions seem to have gotten even craftier at utilizing their playmakers on offense.

“They’re pretty good at everything,” Belichick said. “The skill players are hard to tackle, they’re good guys with the ball in their hands, they can also get down the field and good route-runners. It just creates some matchups. I mean, you force the ball at quicker, you don’t have to cover as long, but you don’t have much help. So, it’s just a tradeoff there.”

In three previous meetings with Mahomes, New England’s defense had the most success when it was able to force turnovers and get pressure on him.

That’s easier said than done against a quarterback who has yet to commit a turnover this season and is completing a career-high 68% of his passes. It’s helped the Chiefs average 433 yards per game in 2020, the second-most in the AFC.

In New England’s 43-40 win over the Chiefs in 2018, Mahomes had his best game against the Patriots, throwing for 352 yards and four touchdowns. But he also had two interceptions, including one on the goal line in the closing seconds of the first half that denied Kansas City what turned out to be crucial points.

The Patriots didn’t force any turnovers in their AFC championship rematch that season but did sack Mahomes four times, doing a much better job of forcing him into quick decisions. They won that game as well, 37-31.

New England tried to duplicate that blueprint last season in the Week 14 meeting, again applying pressure on Mahomes and eventually coming up with a forced fumble in the third quarter that gave its offense a chance to take the lead. Though, the Patriots wound up losing that one, 23-16.

This will be New England safety Adrian Phillips’ fourth meeting with Mahomes and first since joining the Patriots this offseason after spending the previous three years with the Chargers.

He knows firsthand that even a solid effort against Mahomes often isn’t enough because of the ability of the playmakers around him to disrupt game plans.

Last season in the Chargers’ Week 17 meeting with Kansas City, they managed to hold Mahomes to 174 yards passing, one touchdown and an interception. But they also gave up an 84-yard touchdown run to Damien Williams and kickoff return for a touchdown to Mecole Hardman on special teams.

He said the key is to go into the game with rules on defense and then abide by them at all costs.

"They try to make the game as close to college as they can — just get the guys in space,” Phillips said. "They’re basically saying, ‘My guys are better in space than yours.’”

And those options keep changing with the Chiefs adding rookie running back Clyde Edwards-Helaire to an offense that already included receivers Tyreek Hill, Sammy Watkins and Hardman, as well as tight end Travis Kelce.

Patriots linebackers coach Jerod Mayo said it makes for one of the fastest offenses he’s seen on film.

He said accounting for the speed Kansas City has across the board and trying to keep Mahomes in the pocket will be key on Sunday.

“We try to play fast every single week, the problem with Kansas City is they are able to stretch you vertically and horizontally, that always puts a lot of stress on the defense,“ Mayo said. “I think the players can appreciate we’ll be a lot different this week than we were last week or the week before. So we’ll see if the plan works.”

NOTES: Patriots running back James White returned to practice Wednesday for the first time since the death of his father, Tyrone, in a car accident Sept. 20 in Florida. White learned of his passing just hours before the Patriots’ matchup in Seattle. One of New England’s offensive captains, he missed that game and last week’s win against Las Vegas. “I think just having him around us, from a selfish standpoint, I think we love." Patriots safety Devin McCourty said of having White back. "We love having him around and ultimately, we want him to do what was best for him and his family.”