Patriots look to extend success against rookie QBs at Texans 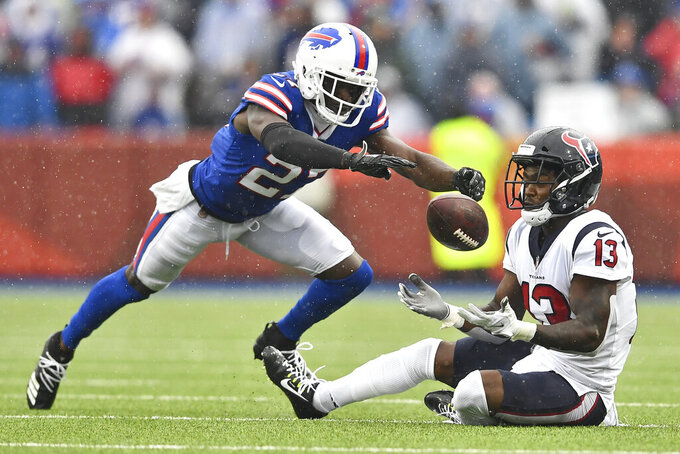 OPENING LINE: Patriots by 8 1/2, according to FanDuel SportsBook.

TURNOVER DIFFERENTIAL: Patriots minus-2; Texans minus-1 .

PATRIOTS PLAYER TO WATCH: LB Matt Judon has been the standout on defense this season, leading the team with 4 1/2 sacks. He’s had a sack in three straight games.

TEXANS PLAYER TO WATCH: WR Brandin Cooks has been the team’s most consistent performer. He leads the Texans and ranks sixth in the NFL with 369 yards receiving. He has two 100-yard receiving games and has a TD catch and a rushing touchdown.

KEY MATCHUP: Houston rookie QB Davis Mills vs. coach Bill Belichick and the New England defense. Mills tied a franchise record by throwing four interceptions last week and will now face a coach that has a 22-6 record against rookie quarterbacks. New England’s only win this season came against the New York Jets and rookie quarterback Zach Wilson, who threw four interceptions in the 25-6 Patriots victory.

KEY INJURIES: The Patriots are dealing with all kinds of issues on the offensive line. Starting left tackle Isaiah Wynn and starting left guard Mike Onwenu were both placed on the reserve/COVID-19 list Tuesday. In addition, starting right guard Shaq Mason and right tackle Trent Brown were also absent for some practice work. Brown hasn’t been active since the season opener when he left early with a calf injury. It doesn’t bode well for QB Mac Jones, who has already been sacked 10 times. ... Houston WR Danny Amendola is expected to return after missing two games with a thigh injury. ... RB Rex Burkhead will sit out with a hip injury. ... DL Ross Blacklock will miss a second straight game after being placed on the COVID-19 list Oct 1. ... LB Zach Cunningham is expected to play after missing last week’s game after being placed on the COVID-19 list.

SERIES NOTES: The Texans have won two in a row against New England. ... The Patriots had won eight straight, including two playoff games, before the recent skid. ... The last four meetings have been decided by seven points or fewer. ... All of Houston’s wins in the series have come at home.

STATS AND STUFF: Jones is coming off his best game, completing 31 of 40 passes (78%) for 275 yards and two touchdowns against Tampa Bay. He leads all rookies in completions (112), completion percentage (70) and yards passing (1,012). … RB Brandon Bolden tied a career-high with six catches for 51 yards last week. … WR Jakobi Meyers leads the team with 27 catches for 246 yards. … WR Kendrick Bourne is looking for his third straight game with five or more catches and at least 50 yards receiving. … WR Nelson Agholor had 55 yards receiving last week. He had five catches for 116 yards and a TD in his only career game against Houston in 2018. … TE Hunter Henry had a receiving TD in his only career game against the Texans in 2016. … CB J.C. Jackson has a pass breakup in three of New England’s four games. … DB Jonathan Jones tied a career high with nine tackles last week. … S Kyle Dugger had a season-high seven tackles and a tackle for a loss against Tampa Bay. ... Houston RB Mark Ingram has had at least 75 yards of offense in two of his three career games against New England. ... RB Phillip Lindsay had 101 yards rushing in his only game against the Patriots in 2016. ... Cunningham has had at least seven tackles in his last four games against the Patriots. ... DE Whitney Mercilus has had a sack in three of the last four games and has had a tackle for a loss in four games in a row. ... CB Desmond King led the team with nine tackles last week. ... CB Lonnie Johnson had his first career interception at Buffalo.

FANTASY TIP: Jones could be a good pickup this week playing against a defense that has allowed at least 250 yards passing in three of its four games.