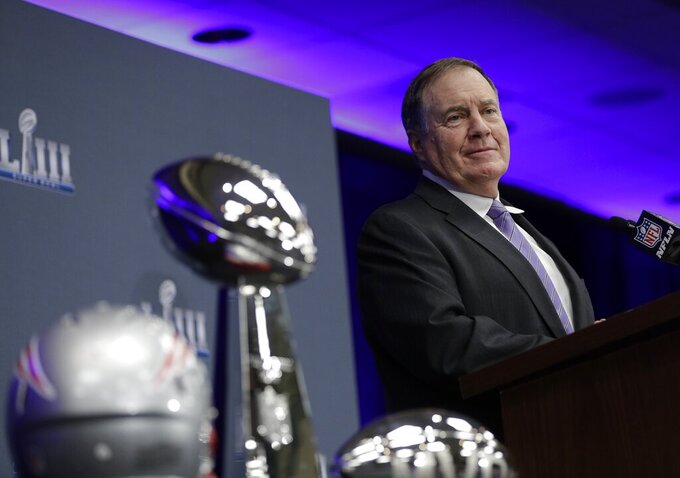 When considering his place in history, Belichick's accomplishments transcend the Super Bowl era after his New England Patriots' 13-3 Super Bowl 53 win over the Los Angeles Rams on Sunday night.

Belichick has joined George Halas and Curly Lambeau as the only coaches to win six NFL titles.

Vince Lombardi won five titles, including two Super Bowls. Lombardi is the namesake of the Super Bowl trophy which was displayed Monday when Belichick and Julian Edelman, the MVP of Sunday's game , discussed the Patriots' latest championship.

Belichick said it was "incredibly flattering" to hear his name mentioned with the coaching legends. He said Halas was friends with his father Steve Belichick, who played for the Detroit Lions and was a longtime assistant coach at Navy.

Lombardi, "Papa Bear" Halas and Lambeau are the names which have been mentioned with Bill Walsh, Chuck Noll, Paul Brown, Don Shula, Tom Landry, Joe Gibbs and others as the greatest NFL coaches.

That was before Belichick began collecting championships. He now has two more Super Bowl titles than Noll's previous record of four and must be included in any grouping of all-time greatest coaches.

"We're grateful to see him continue to have great football teams and bring them together in a way I don't think any other coach has ever done in the history of the game," Goodell said.

Belichick still has quarterback Tom Brady, so the Patriots can't be overlooked in the early discussion of teams which could reach Super Bowl 54 in Miami.

"I competed against some of those coaches and some I didn't compete against but I was aware of," Belichick said. "Coach Lombardi, as a kid growing up and watching the first Super Bowl. It's incredibly flattering."

Belichick said the championship is "a team accomplishment" and said "our entire team and organization put forth a superior and supreme effort to achieve that. That's really what it's all about, about how all of us came together and pulled our own weight so we could achieve our team goals. ... It's what we were able to accomplish as a team that makes me the most proud."

Brady, 41, said Sunday he plans to keep playing . Similarly, Belichick, 66, has made no mention of retiring, so there's no reason to think he has finished setting new standards for his profession.

Edelman said early in his career he saw Belichick on a treadmill, watching game film, late at night at the team's practice facility.

The wide receiver said he told Belichick "You sure like football." Edelman said the coach responded "'Beats being a plumber. See you tomorrow.'"

Belichick provided evidence of his attention to detail on Monday when he questioned Edelman's version of that exchange. The coach's clarification came immediately after taking the microphone.

"First of all, I think Julian might have misquoted me," Belichick said in his typical dry tone. "I have a ton of respect for plumbers. Those people do a great job. I think I said it beats working. But anyway."

With that, it was on to football. It's not too early to start planning a way to break that tie with Halas and Lambeau.