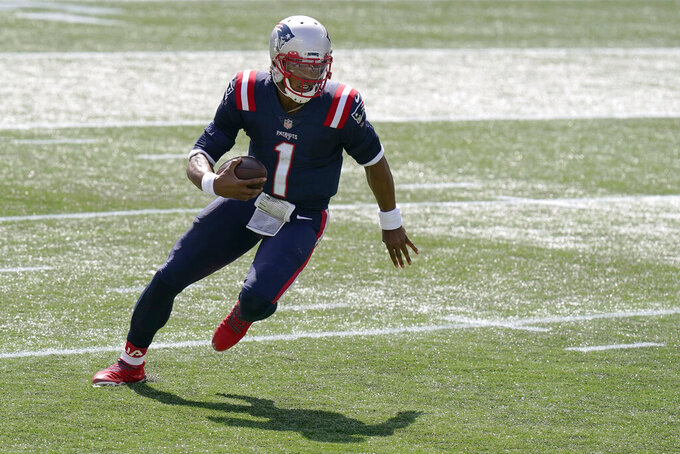 New England Patriots quarterback Cam Newton runs for a touchdown against the Miami Dolphins in the first half of an NFL football game, Sunday, Sept. 13, 2020, in Foxborough, Mass. (AP Photo/Steven Senne)

FOXBOROUGH, Mass. (AP) — If the Patriots’ Week 1 win over the Dolphins revealed anything, it’s that they will have no problem giving Cam Newton plenty of opportunities to run the ball this season.

That’s just fine by him. And if history is any indication, it could translate into a lot of wins for the Patriots in 2020.

Newton’s 15 carries Sunday were the second most of his career and his team-high 75 rushing yards his most since 2017. It was also the most carries and yards rushing by a Patriots quarterback since Bill Belichick arrived in New England in 2000.

“I just wanted to win,” he said after the game.

Winning is exactly what Newton has done during his career when he’s been given a significant number of carries. In the 33 games he’s had 10 or more in a game, he is now 25-7-1.

Newton’s hope is that the Miami victory will be a glimpse of the “new normal” with him at the helm of New England’s offense.

“I think it’s time for everybody, including myself, to realize this is what it’s like. I think it came full circle,” he said. “For me to just kind of realize that I’m a New England Patriot and I’m just going to embrace this whole moment.”

Newton’s recent injury history will certainly factor into whether he can maintain the same kind of production the remainder of this season.

He was hampered by shoulder and foot problems the past two seasons. Both required surgery and contributed to Carolina releasing him in March.

He didn't appear to be favoring either during the game Sunday and the extra rest during the extended offseason may actually benefit him.

Belichick said giving Newton so many opportunities to run was by design.

It’s something the coaching staff plans to continue to embrace.

“Everything we’ve done for the last 20 years, and rightfully so, has been for Tom Brady,” Belichick said. “Everything was dedicated to him, other than the games that he didn’t play in. ... So, there were times when we had to plan differently, but when your starting quarterback has things that he’s good at or things that you can take advantage of, then I think you try to take advantage of them.”

The brightest spot was probably fourth-year defensive end Derek Rivers recording a sack after spending all of 2019 on injured reserve.

Rivers was New England's top draft pick in 2017, but battled injuries each of his first three seasons in the league. Belichick praised Rivers' resilience to get back on the field.

“He’s really showed ... really an incredible amount of mental toughness over the last three years to deal with some of the setbacks that he’s had, none of which were really his fault — just bad breaks, really,” Belichick said. “It came to fruition (Sunday). ... I think that was gratifying for everyone.”

That competition is expected to continue after Folk had mixed results against the Dolphins.

Folk was 3 for 3 on extra points. But he was 0 for 1 on his only field-goal attempt of the day, missing from 45 yards.

While he looked fine during the game, Newton did appear to be favoring his left leg following a brief postgame scrum that included Dolphins players grabbing some chains Newton was wearing. But he said he left the game feeling fine.

3 — Reigning Defensive Player of the Year Stephon Gilmore, Adrian Phillips and J.C. Jackson each had interceptions to help New England hold Miami to 269 yards The Patriots had five games with three or more picks in 2019 en route to notching an NFL-leading 25.

“We’ve still got a lot of work to do,” Gilmore said. “We made some plays, we could have done better in some situations. We’ve just got to watch the film and get better. It’s only Game 1 so we’ve got a long season.”

The absence of linebackers Jamie Collins, Kyle Van Noy and Elandon Roberts (free agency), as well Dont’a Hightower (opt out) didn’t stop the Patriots defense from having a solid debut.

But the competition level jumps up mightily this week when New England visits Seattle. The Seahawks posted 38 points and had 383 yards in their Week 1 win over Atlanta.

By Cliff Brunt 45 minutes ago
By Juan A. Lozano an hour ago
5 hrs ago
By Arnie Stapleton 13 hrs ago
22 hrs ago