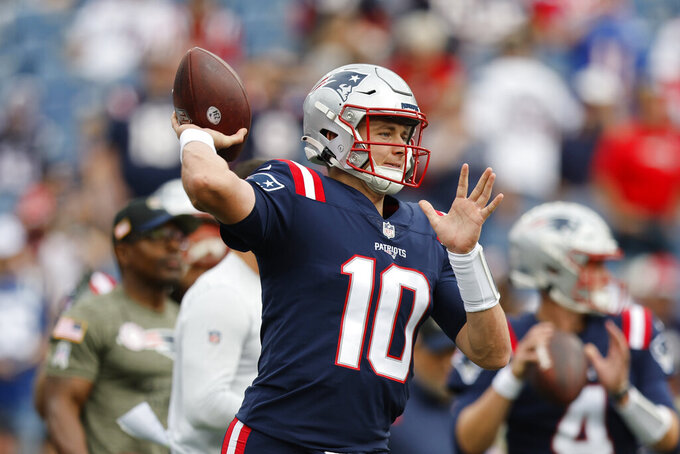 FOXBOROUGH, Mass. (AP) — As a rookie NFL quarterback, Mac Jones approached nearly everything he did last season like a sponge.

The formula was uncomplicated: Take in the information, concepts, plays, and instructions as presented, then execute as asked.

It helped him set the standard among the league’s first-year signal callers, as he led the 2021 QB class in both yards passing (3,801) and touchdowns (22). It earned him a Pro Bowl selection and raised expectations for him and a franchise hoping to have finally found the guy to build around post-Tom Brady.

If only it were that easy.

The jump Jones and the Patriots were anticipating him making in Year Two hasn’t been as seamless as expected following an ankle injury that kept him out for three weeks. That has been combined with some growing pains he’s experienced adjusting to a new play caller and system that has expanded on the short, efficient passes he had success with as a rookie.

“At any level, you’re constantly trying to get better, right? Unless you’re winning the championship, you’re not satisfied,” Jones said. “There’s things that are out of your control and there’s things that you’re in control of. So just trying to focus on those things.”

Before being injured late in New England’s loss to Baltimore in Week 3, Jones had slogged through three games that saw him confront increased pressure from defenses which exploited the vulnerabilities of an offensive line that has been largely inconsistent following some personnel changes.

It affected Jones’ accuracy and contributed to him throwing five interceptions to just two touchdowns over the first three games as he tried to take deeper shots down the field to utilize offseason roster additions such as receiver DeVante Parker.

But when the offense found some traction with rookie Bailey Zappe as the starter in wins in back-to-back games, the spotlight shifted back to Jones as outside criticism — and his statistics — seemed to point toward regression.

That has been quieted some over the past two games that saw a healthy Jones throw two TDs with a lone pick in wins over the Jets and Colts.

Matt Patricia, who has handled play calling duties this season, insists he has seen weekly improvement in Jones, adding that his quarterback has provided great ideas that have contributed to their recent success.

"So that will be a whole different level of improvement ... how we handle that going forward.”

At 5-4, the Patriots entered their bye week in last place in the AFC East, but are still very much in the hunt in a division in which they are only 1 1/2 games behind first-place Buffalo.

New England will meet the Bills twice over the final eight games and will need Jones to be at his best if the Patriots hope to make it back to the playoffs for the second straight season.

Coach Bill Belichick said cleaning up issues across the offense will help Jones the most and that has been a focus of the coaching staff this week.

“I think the best thing we can do, just in terms of the overall production, is more efficiency as a unit,” Belichick said. “Every single person making sure that their execution is as good as it can be on the play, and we’ll have more positive plays, more positive results, less long yardage, more points, etc. That’s kind of the focus for us.”

Whether that means the Patriots simply stick to the things that have worked for Jones in spurts this season or add new wrinkles down the stretch is unclear.

Jones said the coaching staff has welcomed his input and that the most important thing is that those communication lines are open.

“We’ve definitely improved in that part of it, communication, which is the most important piece,” Jones said. “Once you do that, then you get the consistency, then you get the product that we want to put out on the field.

"Definitely working through that and the more we talk together, the more that we all see it as the same, then the better off we’ll be.”