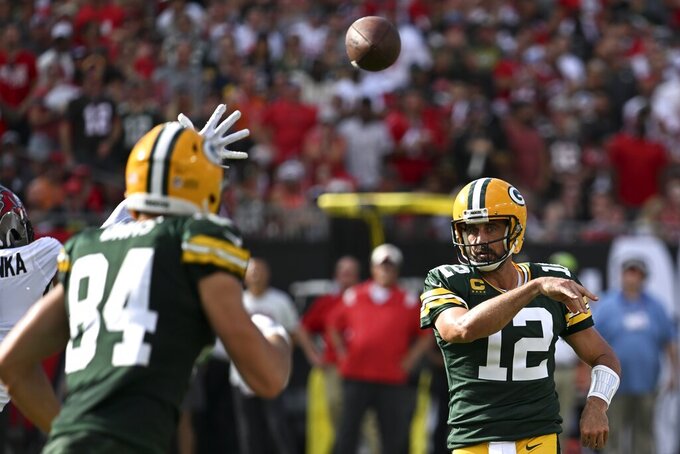 GREEN BAY, Wis. (AP) — Aaron Rodgers is about to face a Bill Belichick-coached team for just the third time in his 15 seasons as the Green Bay Packers’ starting quarterback.

While the two haven’t matched up very often, they gained plenty of respect for each other from afar. They’ll meet again Sunday when the Packers host Belichick and the New England Patriots.

“Best coach in the history of the game, I think,” Rodgers said.

Rodgers also came off the bench to replace an injured Brett Favre and went just 4 of 12 for 34 yards in a 35-0 home loss to the Patriots in 2006, two years before he became the Packers’ starting quarterback.

The four-time MVP has come a long way since, throwing 453 career touchdown passes with only 95 interceptions.

“He doesn’t make very many mistakes,” Belichick said. “He never has. He’s a very resourceful quarterback. He makes the plays that are there. Then he makes a few plays that really aren’t there. Then he rarely makes a mistake where he has a bad play. There’s very, very few of those. I think that’s one of the things that makes him a great quarterback.”

Belichick’s team enters this game with less certainty at quarterback.

Usual starter Mac Jones’ status is out for the game after an ankle injury knocked him out of the Patriots’ 37-26 loss to the Baltimore Ravens. Veteran Brian Hoyer will be making his first start since 2020.

The difference in the two quarterback situations helps explain why the Packers are favored by 9½ points, according to FanDuel Sportsbook.

Even so, the Packers realize they can’t take anything for granted when they’re facing a guy who has won six Super Bowl titles as a head coach.

Jones averages 5.2 completed air yards per pass attempt to rank third in the NFL behind only New Orleans' Jameis Winston (5.7) and Miami's Tua Tagovailoa (5.4), according to Pro Football Reference.

How much the passing plan will change with Jones unavailable is unclear. Recent history says there could be a significant drop-off if Hoyer is under center.

In 15 appearances since 2018, Hoyer has averaged only 3.6 completed air yards per pass attempt.

Each of these teams relies on two running backs to share the load relatively equally.

Green Bay has Aaron Jones and A.J. Dillon. Jones has 32 carries for 217 yards and nine catches for 76 yards. Dillon has 40 carries for 138 yards and eight receptions for 58 yards.

New England’s Matt Judon and Green Bay’s Rashan Gary have both recorded a sack in each of the first three weeks.

They’re not the only effective pass rushers on their respective teams.

New England’s Deatrich Wise has a team-high four sacks and got three of them against the Ravens. Green Bay’s Kenny Clark is coming off a two-sack performance in a 14-12 victory at Tampa Bay, and Preston Smith also has two sacks this season.

Patriots cornerback Jonathan Jones has an interception, two pass breakups and a pair of forced fumbles. It’s helped him rate as Pro Football Focus’ top player as his position through three weeks.

He’s excelled most as an outside defender, where he’s played more than 80% of his snaps this season. Jones said he’s embracing the challenge of defending there as opposed to the slot thus far.

“You’re definitely on your own,” he said. “It’s a different perspective than being on the inside. There’s not as many bodies between you and the quarterback.”

The Packers’ top cornerback is Jaire Alexander, who missed most of the Bucs game with a groin injury.

The Packers worked Bakhtiari in gradually by having him alternate series with Yosh Nijman at left tackle. The Packers haven’t indicated whether they will continue that rotation against New England.